On the whole, property taxes are the biggest cost 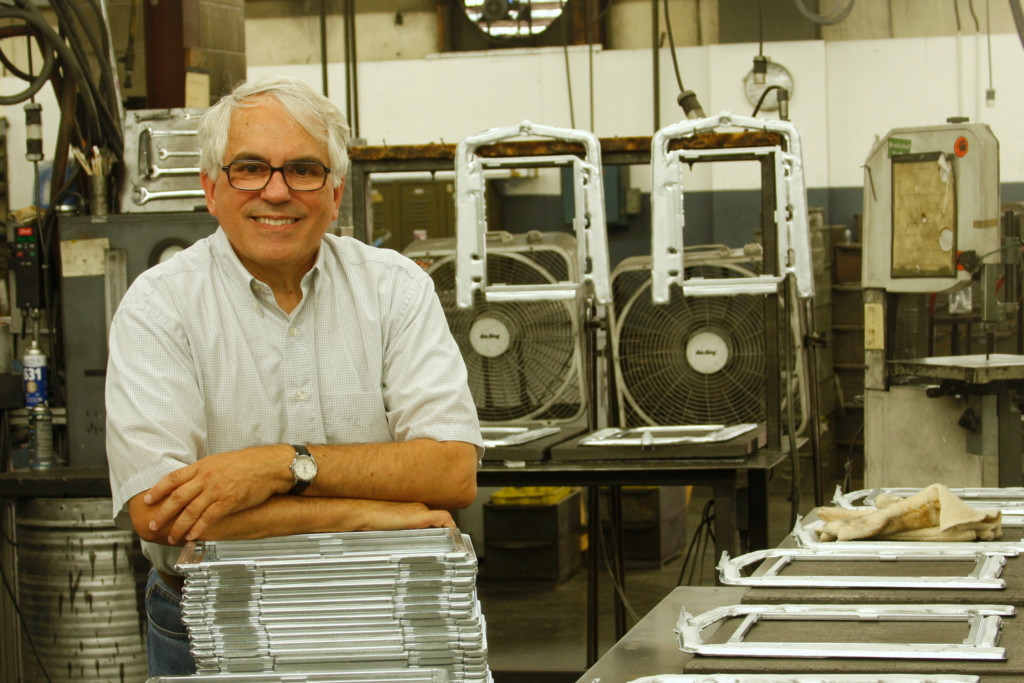 Since 1997, Graphicast Inc. in Jaffrey has paid more than three times as much in property taxes as it has in business taxes, said Owner and President Val Zanchuk. (Photo by Annie Card)

Graphicast Inc. in Jaffrey has paid its share of business taxes.

The company — which employs 25 people and has some $3.5 million in annual sales — has paid about $89,000 in state business taxes since 1997, according to its owner and president, Val Zanchuk.

In the same time frame, the property tax bill the company has paid on its 13,000-square-foot facility — located on six acres of mostly sandlot — has totaled $275,000, more than three times as much.

Since 1997, Graphicast’s business tax bill has gone up and down. In the last couple of years, it didn’t pay anything, thanks to some research and development tax credits. But property taxes, he said, have been “relentless. That number doesn’t change, whether you make a profit or not,” said Zanchuk.

Graphicast’s property tax bill is exceptional in some ways. The company has more land than it needs in a town that had the 16th highest property tax rate in the state in 2018. But the property tax burden borne by New Hampshire businesses is the norm.

Yet during the last state budget debate, when business tax cuts advocated by Republicans were countered by Democrats proposing property tax relief, business groups’ biggest issue was the cuts in the business profits and business enterprise taxes. 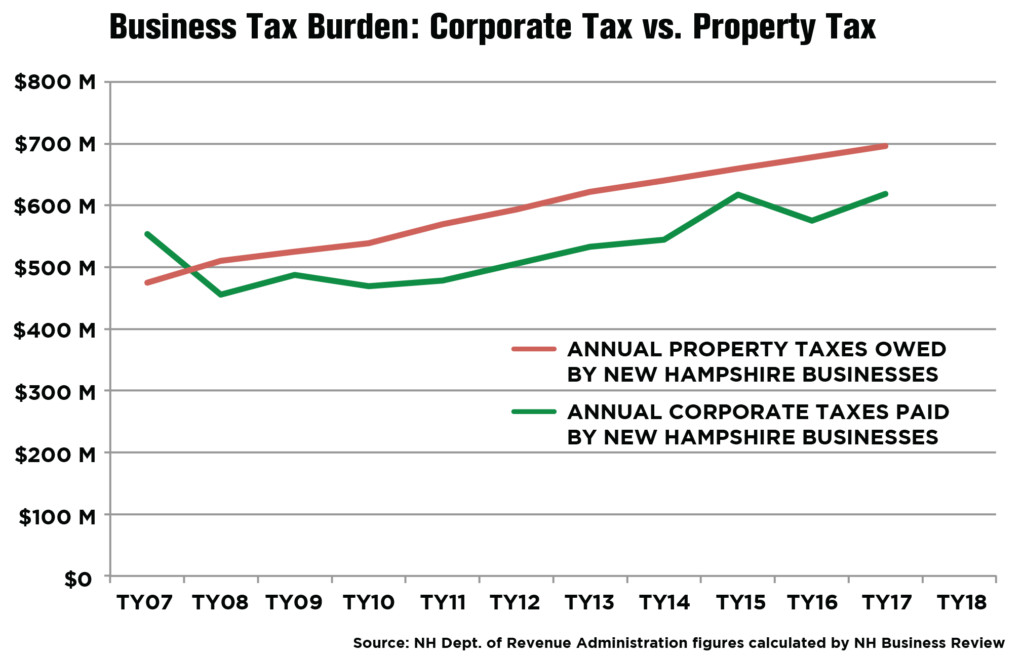 For one, business taxes are an easy target, explained David Juvet, senior vice president of policy for the Business and Industry Association of New Hampshire.

Corporate taxes are only paid by businesses, and homeowners pay about 60% of all property taxes. And while there have been complaints voiced about property taxes during the BIA’s regular business roundtables, the concern has not risen to the level of the labor shortage, the need for workforce housing or corporate taxes. And those advocating relief for property taxpayers tend to emphasize the residential tax burden — the elderly couple on a fixed income struggling to hold on to their home, not so much the struggling business trying to meet its payroll.

New Hampshire businesses owed nearly $6.5 billion in property taxes from 2007 to 2017 and paid $5.8 billion toward the BPT and BET, according to data provided by the state Department of Revenue Administration and calculated by NH Business Review. Only two years, 2007 and perhaps 2018 (final corporate tax figures aren’t in yet), businesses paid more in corporate taxes than property taxes.

While corporate tax revenue is erratic, plunging during the recession in 2008 and in 2016 (shortly after the business tax rates went down and before the sluggish recovery picked up steam), property tax bills have steadily climbed.

And in 2018, the total amount of property taxes paid by New Hampshire businesses climbed to $735 million, a 6% increase, while corporate taxes jumped 42%, to $879 million, though that could partly be because they were calculated differently. Earlier corporate tax figures are final year figures provided by the DRA, grouped by the tax year of the filer, whether that year corresponds to the calendar year or not. Since the DRA hasn’t released that figure for 2018, NH Business Review used the preliminary monthly cash receipts, minus refunds.

The figures are all aggregates. What individual businesses pay will vary widely.

Grappone Automotive Group, with $220 million in annual sales at its 30-acre complex mostly in Bow and partly in Concord, pays more than twice as much in property taxes as in corporate income taxes.

“We are very building-intensive,” said Larry Haynes, president and CEO. “We have small margins but big showrooms, expansive garages and need lots of area to store cars.”

On the other hand, Great NH Restaurants, which owns 10 restaurants under the T-Bones, CJ’s Great Western Grill and The Copper Door brands — mostly located in the southern tier of the state — pays roughly the same amount of property and business taxes, according to CEO Tom Boucher’s “back of the napkin” calculation.

A very profitable manufacturer operating out of a small footprint might pay relatively more in business taxes, whereas the tax bill of a real estate developer, with acres of land that can be depreciated, will mainly consist of property taxes, noted Russ Thibeault, president of Applied Economic Research in Laconia.

“You call 10 different businesses, you might get 12 different experiences,” he said. 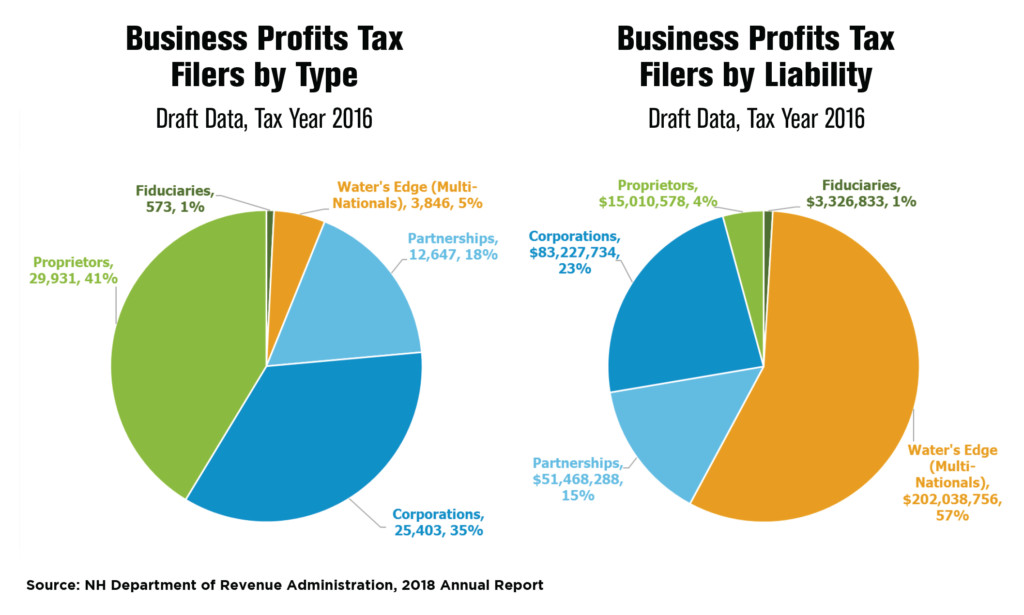 But comparing the aggregate payments, which he noted has never been done before in New Hampshire — is “well worth the exercise” because of its significance to public policy.

The comparisons, however, can be very tricky.

First, property tax figures represent what is owed based on the assessed commercial value of the property (both land and building) multiplied by the local tax rate (which includes the statewide property tax). How much is actually collected is not broken down by the type of taxes paid. The figures don’t include rebates or tax credits, though those would be relatively small compared to many of the residential tax breaks for veterans, the elderly and the disabled. Corporate tax figures reflect what is actually paid.

And that’s just the tip of the iceberg when it comes to differences.

Look at property taxes. Included under the commercial/industrial classification are residential apartment buildings with five or more units. While the landlords are running a business, a lot of those taxes are paid by their tenants in their rent, especially lately with the rental market so tight. So, in some ways, these aren’t business taxes at all.

But that’s not the opinion of the Council On State Taxation, or COST, which contracts with the accounting firm Ernst & Young to analyze various taxes paid by businesses, including pass-through taxes (like the state’s rooms and meals tax or taxes paid by tenants). Thus, in 2017 (the latest year reported), COST reported New Hampshire businesses paid $1.7 billion in property taxes, $1 billion more than NH Business Review’s figure. COST estimates that property taxes comprise 57% of the total taxes paid by New Hampshire businesses — way above the national figure of nearly 40% (although it is still the largest single business tax category in COST’s calculations).

The corporate income tax total in New Hampshire (COST includes the BPT and BET in that category) amounts to $600 million, accounting for 19% of a tax bill. Sales tax is the next biggest figure in most states, but in New Hampshire it is excise taxes — on rooms and meals, alcoholic beverages, cigarettes and gas — all paid by the consumer and passed on by the business. That amounts to 14% of the aggregate New Hampshire business tax bill, according to COST.

‘All over the map’

While the amount of total business taxes collected in New Hampshire has gone down slightly from last year, as a whole the business tax total (4.4% of gross state product) is nearly the same as in the rest of the country.

While lease arrangements are “all over the map,” he said, many specify that property taxes get paid to the property owner separately. A few even require that a separate check go directly to the municipality. Offices, small stores and stores in many shopping centers might just pay gross rents, often with a clause allowing the landlord to raise the rent in the middle of a long-term lease should taxes go up. Norton said that about three-quarters of commercial leases have some kind of tax arrangement.

Taxes also vary greatly by the type of lease. Industrial tenants may pay somewhere between 50 cents and $1 per square foot in taxes and offices pay $1.50 to $3 per square foot.

On the other hand, DRA officials pointed out, those businesses based in a home or garage pay property taxes, but they are classified as residential, not commercial/industrial.

Businesses don’t just pay property taxes in different ways, they pay them at vastly different rates — a disparity that is usually discussed when it comes to residential taxpayers.

Businesses in Claremont, for instance, pay nearly three times the tax rate of a business in Portsmouth. Keene businesses paid $28 million in property taxes, more than triple the amount of businesses in Conway.

It isn’t just the rate; it is how these properties are assessed. Laconia, for instance, has a slightly higher rate ($20.85) than Bedford ($20.40), but “Copper Door, assessed out of Bedford, is our highest,” said Boucher, when discussing Great NH Restaurants’ property tax bills. “It’s a lot less in Laconia.”

The DRA doesn’t keep track of corporate business taxes by location or the location of the taxpayers, making any local comparisons impossible. Indeed, 57% of New Hampshire’s BPT revenue comes from multinational corporations, according to the latest budget report by the New Hampshire Fiscal Policy Institute, which used 2016 tax data.

Such huge corporations — think BAE Systems or Oracle Corporation — only pay those state corporate taxes apportioned on their business activity in New Hampshire. Half of that apportionment is based on how much they sell here, a quarter on how much they pay their employees here and a quarter on the property tax. (The budget that lawmakers and the governor agreed to in September changed that formula going forward. The apportionment will totally be based on sales, which should mean out-of-state companies will pay an even greater share of BPT.)

Big taxpayers pay the biggest chunk of the BPT, according to NHFPI. The top 1% of BPT payers (which paid at least $100,000) paid 70% of the $355 million collected. One-tenth of 1% (paying more than $1 million each) account for nearly one-third of the total collected.

Thus, the biggest beneficiary from a cut in corporate taxes would seem to be large corporations, and when it comes to the BPT, multinational corporations mostly headquartered out of state. Many small companies pay very little in such taxes.

Property tax relief, on the other hand, would tend to benefit businesses across the board.

But many businesses don’t believe that this is a real choice.

“The tax promise we hear all the time is that if we raise this, we will lower that,” said Boucher. “But a lot of times we raise this, and then the other goes back up.”