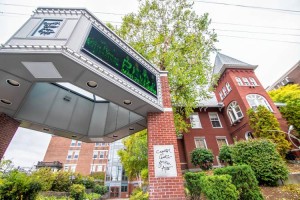 The Capitol Center For the Arts on South Main Street in Concord: ‘It’s very hard to have a performance with over 1,000 people walking through a door and have a conversation with each and every person about their vaccination status,’ says the venue’s executive director, Nicki Clark. (Photo by Geoff Forester/Concord Monitor)

The state’s performing arts venues are getting ready to bring back live performances and crowds this summer as the pandemic eases, but they’re also ready for a lot of audience uncertainty about how to behave.

“The specific protocols are going to vary from venue to venue and even among events at the same venue,” said Beth Falconer, director of 3S Artspace in Portsmouth, one of a dozen representatives of state venues who spoke during a press conference Tuesday. “You should understand when you’re buying tickets what the situation is for that particular performance.”

The press conference, held by a loose coalition of about 40 independent movie houses, live theaters and performing art stages around New Hampshire, released a series of drawings that can be used to indicate preferences for masks, social distancing and vaccination for audiences, employees and performers. They can give a quick idea about what’s expected in a world that’s grown accustomed to communicating with emojis.

“If you buy a ticket for an event several months off, safety protocols are likely to change by that date. So pay attention; prepare for your visit in advance,” said Falconer.

With any luck, officials said, everybody will be so happy to see shows and movies again that venues will only need to encourage, rather than enforce, standards about masking, social distancing and vaccination.

“We’re not going to have bouncers climbing through seats because they don’t have masks on,” said Scott Hayward, co-owner of Tupelo Music Hall in Derry, responding to a question about how venues will deal with uncooperative audience members.

“It will basically be the honor system. … It’s very hard to have a performance with over 1,000 people walking through a door and have a conversation with each and every person about their vaccination status,” said Capitol Center for the Arts Executive Director Nicki Clark.

Andrew Pinard, founder of the Hatbox Theater in Concord, said that theater had seen no problems as one the few venues with indoor performances through last fall and early winter. “We had zero instances of anyone not being aware or not complying with the safety mitigations of the time.”

The biggest concern about audiences, however, is not how they’ll behave but how quickly they will return.

All the venues have been devastated by the loss of ticket income over the past year, complicating preparations for reopening.

“We have to rehire before we have evidence of the audience return, or know whether we’ll be at full capacity,” said Falconer. “We just need those audiences to keep up with our re-hires!”

Hiring of any kind will be an issue, they said, particularly for experienced workers who handle lighting, sets, ticketing and other specialized jobs.

“Some of those folks left the industry. Just like the hotel industry, like the hospitality industry, we’re going to be facing a worker shortage,” said Monte Bohanan, marketing director of The Music Hall in Portsmouth.

The realities of booking and preparing live shows also effects what we will see this summer, they noted. A live play that has been preparing for an outdoor venue can’t suddenly move indoors where staffing, sets and other needs are different, just because the state has changed its requirements.

Or consider classic rock act Three Dog Night’s show at Tupelo in Derry. It was scheduled for April of last year, then July of last year, then for March of this year, and now will be held Aug. 20. Tupelo was the first venue in the state to hold outdoor, drive-in concerts, and this will be its first indoor concert since the pandemic hit.

Hayward noted that he can’t limit audience size to enable more social distancing even if he wanted to, because Gov. Chris Sununu has lifted the state of emergency. “We sign contracts months in advance. I’m now required to fulfill the contract … I’m contractually bound to offer the same number of seats.”

There is, however, a solution to almost all these concerns: Vaccines.

“The biggest safety recognition … is to please get vaccinated,” said Falconer. “Our first and most important message is: Please, go get the shot. The faster New Hampshire gets to 75% to 80% percent people vaccinated, the quicker you’ll see all the other safety regulations go away.”