Another month, another increase in New Hampshire home sales 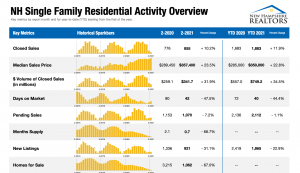 February is supposed to be a slow month in the real estate market, especially in times of economic uncertainty and especially in a state that gets rather cold in the winter.

But not this February and not in New Hampshire.

According to the New Hampshire Association of Realtors, sales in February were 10.2% above last February. Prices are up 23.5%. The median price for a single-family home was $357,400 – nearly $70,000 more than pre-pandemic levels.

But there were just over 1,000 homes for sale in February – 1,062 to be precise. That’s about a third of the number that were on the market in February 2020. That means if no homes were on the market, that measly inventory would last 0.7 of a month – a little more than 20 days. Homes sold in an average of 42 days and sellers, on average, receive 100.% of their asking price.