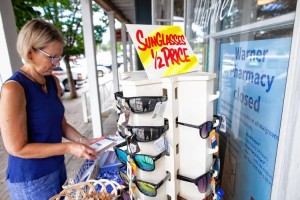 Cynthia Snay puts out discounted items in front of the Warner Pharmacy. The pharmacy, like many businesses in downtown Warner, suffered during the pandemic and closed at the end of July. (Jonathan Van Fleet/Concord Monitor)

Yet another independent pharmacy – this one in Warner – has closed, and the owner is blaming a familiar culprit: The complexity and cost of the modern reimbursement system.

“It’s bonkers,” said Cynthia Snay, who owned Warner Pharmacy from 2010 until it shut its doors last month. “They come up with these cockamamie rules. It’s basically a clawback, months and months after you’ve adjudicated the claim, based on some metric that the pharmacy benefits have decided. It is totally unregulated and totally un-transparent.”

The pharmacy’s closure – the only drug store in town – deals another blow to Warner’s tiny downtown that saw several businesses close during and after the pandemic.

“It was hard on everyone,” Snay said of the shutdowns and changes in people’s habits caused by Covid-19.

Snay sold patient files – Warner Pharmacy serves customers from multiple towns throughout the region – and much of the medical inventory to Walgreen’s after she couldn’t find an independent pharmacy that would buy them.

“The people at Walgreen’s were lovely to work with,” she said. “They have the reputation of being the best chain, if you have to go with a chain.”

Snay owns the handsome three-story building at 11 E. Main St. in the center of Warner, which has four apartments above two storefronts. She’ll be putting the pharmacy space up for lease at some point, but it still needs to cleaned out.

On Aug. 11, she was putting out unsold items like sunglasses and vitamins in front of the store that could be purchased for a donation. She’s trying to give away as much of her inventory as she can to charities like the local food pantry.

The closing of Warner Pharmacy follows that of other Concord area pharmacies. Penacook Pharmacy shut in April after 53 years, and Granite State Pharmacy in Concord closed in 2020 after a decade as the successor to Modern Pharmacy, which had been there 40 years. While the chaos of the pandemic played a role in the decisions, all three owners placed much of the blame on systems by which pharmacies acquire patients and get paid.

This includes the rise of pharmacy benefit managers, or PBMs, that steer patients to specific pharmacies or medications, and direct and indirect remuneration fees on Medicaid payments, which are imposed by benefit managers that operate between pharmacies and insurance companies.

“It’s a take-it-or-leave-it kind of thing, and you can’t leave any of them because that would be a fourth or a third of the population you would be serving,” Snay said. “I’m not sure how many years independent pharmacies will be able to exist without changes.”

The number of independent pharmacies, as compared to stand-alone chains or pharmacies that exist inside supermarkets or retailers like Costco, has been declining for years. The 2021 digest of the National Community Pharmacists Association said almost 19,400 exist nationwide, down from more than 23,000 in 2010.

That figure is smaller than the 22 independents in Vermont, which has half of New Hampshire’s population, and barely one-third the number in Maine.

By contrast, New Hampshire is loaded with chain pharmacies; the digest listed 133, more than any state in New England except Massachusetts.

Snay, 57, is a pharmacist who began working in pharmacies as a teenager. She says the industry has been getting harder for independents for a while.

“It’s been slowly eroding, but three or four years ago it got really bad,” she said. “There are just so many years you cannot pay yourself, to the point that it’s not worth the hassle.”

Snay lamented the closure partly because it signals a decline in an important healthcare relationship.

“The pharmacist is the person you can walk in and say, ‘Hey, here’s my question,’ and you get 10 minutes of their time. They know you, your situation, your family – but that is going away,” she said.