Retailers, manufacturers rethinking where and how they get products, materials 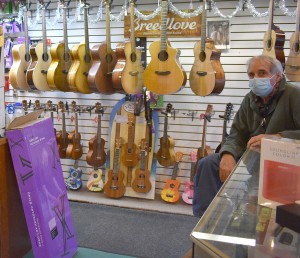 Peter Bissonnette, seated at right, said it’s been difficult to get just about anything the store stocks. (Adam Drapcho/The Laconia Daily Sun)

Grevior Furniture in Franklin has been in business for nearly a century, but it has never seen a year like 2020.

“Things have just been crazy,” said Jason Grevior, the third generation of his family to run the business. The craziness he’s referring to is an effect of the coronavirus pandemic. Demand has been strong, he said – it’s getting something to offer the customers that’s the problem.

Grevior said supply chain disruption has been a problem for his business since he was able to reopen after the state’s stay-at-home order ended. “I shut down for the mandatory time when the state told me to, right after that it’s been a huge issue,” Grevior said.

“Some of my factories are 26 weeks out. I’m forecasting until May. It’s a mess,” Grevior said.

The reason furniture makers are months behind is twofold, in Grevior’s view. First is the impact that coronavirus infections have had on factories, as outbreaks among workers can halt production for days or weeks. Second, people who are spending more time than ever in their homes – and not spending their money on travel – are deciding it’s time to upgrade.

“People are stuck at home. They want to be more comfortable in their own house,” Grevior said.

Grevior Furniture has adapted its business model as a result. Instead of asking customers to order their furniture from the factory, which could take many months for them to deliver, he’s stocking what he can get and selling it directly to the customer.

It’s a reversion to how the business used to be run, he said.

“We made a conscious decision to get furniture off the floor island into customers’ homes instead of making them wait,” Grevior said. “Which my father loves, because it’s old-school retail.

“If you can get it, you can sell it. The problem is getting it,” Grevior said.

‘This year is no joke’

Supply issues are not unique to the furniture industry. Peter Bissonnette at Greenlaw’s Music in downtown Laconia, said he is dealing with shortages across the range of instruments, recordings and equipment he stocks.

“This year is no joke,” he said. “You can’t buy a stereo receiver from anyone in the United States.”

Bissonnette said compact discs are hard to get, as well as guitars in the $200 to $400 range, which he said are what most shoppers are looking for. He has a list of customers that will buy a new CD player as soon as they arrive. Looking for a turntable for vinyl records? “Maybe in March,” Bissonnette said.

“You just shake your head and say, ‘How the heck did this happen?’” Bissonnette added said. “It’s amazing. I’ve never seen it in my 42 years of doing this.”

The pandemic has exposed the weaknesses of modern just-in-time manufacturing, with which companies aim to have very little product warehoused and try to match production with demand as much as possible. That means that something like sudden demand can cause a shortage, as can an unexpected incident that slows production. This year, the coronavirus pandemic had both effects for many industries.

Nevin Cyr, manager of Cyr Lumber in Tilton, said lumber is another commodity that was in high demand just as supply was shortened, and that the situation has only just begun to settle back into equilibrium.

The lumber industry saw coinciding spikes in demand with halted production – both side-effects of coronavirus, Cyr said. On top of that, there were hurricanes and wildfires that also affected the supply chain.

“Going back to when Covid started, going back to April, demand started going up because people were building more decks, more sheds, more additions,” Cyr said. In some cases, his orders were met with eight-week delays, and contractors and DIY types had to call every lumberyard within driving distance to source the materials they needed.

Some specialty materials are still hard to find, or unusually expensive, he said, but, “It seems like it’s starting to settle out.”

Karmen Gifford, president of the Lakes Region Chamber of Commerce, said that many more industries have been affected. Parts to service snowmobiles were back-ordered, she said, as were household appliances. “There was a point when folks couldn’t get refrigerators,” she said. “Then it’s an issue with some of our manufacturers, where they might have orders for things, but they can’t get the parts to create them.”

She said she has seen businesses change they way they source their products or materials. The uncertainty of ordering something from across the country or world might outweigh any price savings, so she has seen local businesses switch to a local source when possible.

“It’s a great way to still do business, locally, calling around, placing orders online and going to pick it up,” Gifford said. “And I would encourage people to do that.”

She also encouraged businesses to adapt their strategies with a longer time frame in mind – don’t just find a temporary solution, she said, look for completely new ways to grow and progress.

Grevior Furniture isn’t facing an existential threat in this period of shortage, Jason Grevior said. But he added that many of his neighbors aren’t as well-established, and he worried that they may not survive if the buying public doesn’t support them.