New Hampshire’s economy was doing very nicely before this election came along, thank you very much, and it seems to be doing very well still, Trump bump or no. Despite the cries from both the left and the right of jobs, jobs, jobs, the state seems to be overflowing with them. It is workers that New Hampshire needs, not work.

With an unemployment rate that hasn’t been this low since the dawn of the millennium, and only exceeded in the late 1980s, the state’s on pretty solid economic ground.

Here are just a few statistics:

•Bankruptcy filings are down by 7 percent, following five straight years of double-digit declines. Foreclosures, which declined by a fifth last year, are at their lowest levels since 2007.

•Wages are up: Manufacturing wages are now at $20.50, almost a dollar more than last year. Overall average hourly earnings are now up to $26.10 an hour, 65 cents more than a year ago.

•Business tax revenues, coming primarily from taxes on profits and wages, are up 9.4 percent, even though the rates have gone down.

•Single-family home sales have increased nearly 10 percent so far this year, with prices up more than 4 percent. Residential construction are contracts up 13 percent.

•Rooms and meals tax revenues are up 5 percent, along with room revenue.

“Overall things are pretty good,” said Russ Thibeault, president of Applied Economic Research in Laconia. “It’s the best story we’ve had in a while — certainly in this decade.”

The question is whether the political earthquake that just happened nationally will shake up the economy’s fundamentals or just rattle it a bit.

The expected policies of a Trump administration could help matters, Thibeault said. But then again, they could hurt.

For example, there’s the expected “huge” investment in infrastructure. Combining a massive infusion of government spending with lower taxes, it is the recipe for an immediate economic stimulus (though, warn deficit hawks, it is also a formula for inflation and higher interest rates).

And the question, especially in New Hampshire, is where they would be coming from.

“This is the busiest I’ve ever been,” said Michael Dion, president of Manchester-based commercial framing and drywall contractor Metro Walls, which has been in business since the early 1990s. “If I could find 50 to 75 skilled workers, I could put them to work tomorrow.” 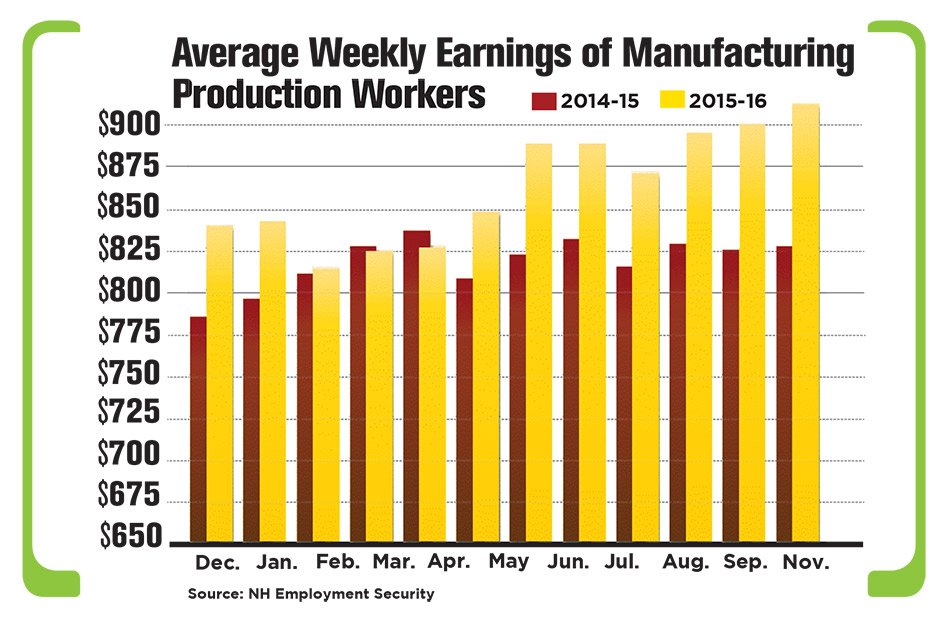 But Gary Abbott, executive vice president of the Associated General Contractors of New Hampshire, thinks that construction firms will be about to rise to the occasion.

“They were worried about that during the stimulus, and that was successful,” he said. Of course that was back in 2009, in the depths of the Great Recession and the economy badly needed a jolt. But, said Abbott, road contractors had another stimulus last year, thanks to the increased spending on the widening of Interstate 93, “and we didn’t see any problems meeting the need.”

“We are definitely constrained by lack of talent,” said Matt Cookson, the executive director of the New Hampshire High Tech Council. “It’s a continuing challenge.”

“We have some positions that have been open for a year,” said Richard Grosky, CEO of Tech NH Inc., plastic injection molding company that employs 85 people, about 10 percent more than just a few months ago.

At practically the other end of the labor market spectrum is the hospitality industry, where the situation is the same, said Priscilla Lane Rondeau, owner of the 900 Degrees restaurants in Manchester and Epping who’s opening another in Portsmouth this summer with the hopes of hiring another 50 people. “It is so difficult to get employees,” she said. “We are lucky to have and hang on to the people we have.”

All of the employers said they have had to increase wages and benefits to attract employees, and that is starting to affect wages. But, for better or worse, New Hampshire’s wage structure lags beyond that of surrounding states. That starts at the minimum wage, which remains unbudged as $7.25 an hour, significantly behind the minimum in Vermont and Massachusetts, and soon Maine, which just voted to increase it from $7.50 to $12 by 2020.

There are other factors at work that may put upward pressure on wages.

Tightening restrictions on foreign labor might increase the price of domestic workers. And there’s the possibility that, in addition to infrastructure spending, the federal government starts pouring money into defense spending, which many New Hampshire firms are dependent on.

Take C3I Inc., a firm that builds command and control equipment for U.S. Navy ships. It is moving from Hampton to Exeter in order to increase its square-footage by 50 percent. If the Trump administration keeps its promise to increase the fleet from 280 to 350 ships, Mike Curry, president of C3I, says he could see his workforce increase by 30 percent.

But while there is a shortage of labor, there is no shortage of capital, and that might loosen even more if restrictions are loosened on banks and other financial institutions, another of Trump’s campaign promises.

With restrictions on expansion, much of that capital has been directed to mergers and acquisitions, across the country and in the Granite State. 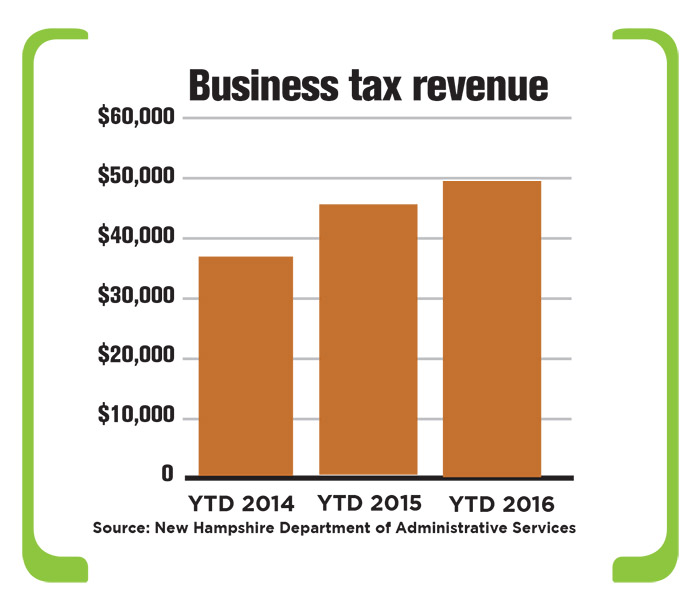 It’s not just private equity and investor angels that are so active. Banks, which in New Hampshire have about a half-billion dollars more in capital compared to last year, have stepped up their lending, now that their past-due loans are down to 0.75 percent, half of what it was two years ago.

This helps deals happen at a smaller scale, said Joe Carelli, president of Citizens Bank New Hampshire and Vermont, who handled a dozen such acquisitions in the state last year.

“In the last 25 years, I have never seen the velocity of discussion in companies willing to make a deal as I see now,” Carelli said.

Part of the reason for the activity is that “perceptions of values have peaked,” combined with “baby boomers looking to retirement,” he said.

A Citizens Bank national survey of 600 leaders of mid-sized business leaders nationally, released on Dec. 7, shows that Granite State is far from unique. More than a fifth are involved in an acquisition, and half are considering one.

The survey was conducted before the election. At that time, at any rate, there was a strong fear of a correction, which drove some executives to make a deal, before value plummeted. 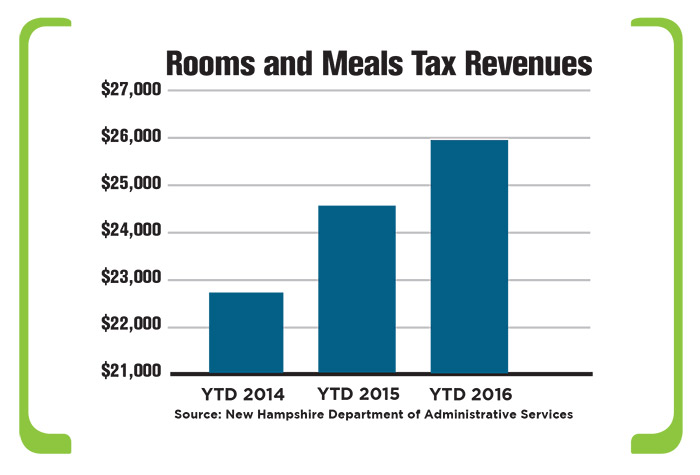 John Howe, co-owner of Business Transition Strategies, a Pembroke-based M&A firm, is seeing the same trend among smaller companies. His business has increased by about 20 percent this year, he said.

Howe contends that smaller mergers enable companies to grow into the next step, creating jobs, as opposed to a larger merger looking for efficiencies, which might eliminate them.

According to the latest numbers, inventory of single-family homes is down by a whopping 30 percent. That has slowed down home sales, which had been going up at 9.5 percent year to date. Yet home prices have not shot up through the roof, creeping up at a modest 4.4 percent in October.

Rachel Eames, a Concord Realtor and the president-elect of the NH Association of Realtors, has one explanation for the housing picture.

Buyers are coming out of the woodwork, she said, or more literally, out of their parents’ basement or from their apartments. They are partially driven out of the latter by rising rents – a two-bedroom apartment is now renting at average of $1,200, double from a year ago.

And the new crop of homebuyers if more cautious then their parents were.

“Buyers are choosing to purchase less of a home,” Eames said. “They could qualify for more, but they backed off significantly. They don’t want to be tied to their home. They don’t want more than they can afford. We all know what happened with that.”

While you might think that with this demand for housing, the local sawmills and timberland owners would be doing great. Think again. While lumber sales are going well, competition from China has resulted in the closure of three paper mills in Maine, and that means 5 million tons of the market for low-grade wood is gone, said Jasen Stock, executive director of the NH Timberland Owners Association.

“Sawmills are piling slabs of chips behind the mill because they can’t get rid of them,” Stock said.

New Hampshire is somewhat buffered from this economic devastation, thanks to its nine biomass plants, but in Maine, “they are teetering on the edge,” said Stock.

Another sector of the economy that hasn’t shared the general economic uplift is traditional retail. A quick look at the raw employment numbers show that fewer people were working at department stores this year, for instance, than last year. Consumers are still shopping, but increasingly more on their screens than in the malls.

Of course, not all retail is affected by online sales. Those seeking jewelry, for instance, generally come into the store, said David Bellman, owner of Bellman Jewelers on Elm Street in Manchester.

“People going to pick out a TV, it will be the same wherever you buy it. But no two diamonds are alike,” said Bellman.

And that growing consumer confidence can infect everything from shopping to eating out.

“I feel very positive about the New Hampshire economy,” said Lane-Rondeau, owner of 900 Degrees. “There are more and more reasons to come to the state besides it’s natural beauty. The hospitality industry is doing well. People need to get out of the house and have a good time.”

The state Division of Travel and Tourism Development is confident as well. Visitor spending is expected to reach $1.2 billion in the next three months, a 6 percent increase from last year’s snowless winter.

The end of the long presidential election campaign has also helped, said Christopher Wolfe, president of MNR Technology in Newfield, who attributes the economic optimism to Trump, who is perceived as a pro-business president.

Grosky of NH Tech, however, said it doesn’t really matter who was elected. More important is the ending of uncertainty. “It happens every election. The business goes soft during the campaign, but afterwards we see this bump.”

Grosky said he’s ready to ride that bump. But he also been around long enough to know that it won’t last forever. That’s why he won’t expand that quickly.

“If things do turn around and go the other way, we’ll be ready then as well, ” he said.