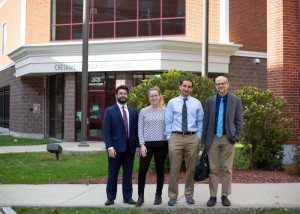 Attorneys of the NH Public Defender’s Keene office include, from left, Alexander Weinstein, Sarah Carter, Joseph Frankel and Alex Parsons outside the Cheshire County Courthouse in downtown Keene on Wednesday. Seven attorneys work out of the office.

Amid a statewide shortage of criminal defense lawyers to represent those who can’t afford an attorney, changes to the New Hampshire court system could provide some short-term relief.

Among those changes, a recent order by the NH Supreme Court opens a new avenue for private attorneys to take on these cases, lessening the caseload falling to already-strained public defenders.

Richard Guerriero, a Keene-based defense attorney who is the president of the NH Bar Association and worked as a public defender for 20 years, described the shortage as a long-term problem exacerbated by the pandemic.

Over the past decade or so, fewer people have been attending law school, tightening the market of lawyers available, said Guerriero, who now works in private practice. The demand for lawyers pulls those who might otherwise take jobs as public defenders toward positions that pay significantly better, he said.

“The average public defender trial lawyer could go interview today and raise their salary,” Guerriero said. “It’s very easy for them to do that, and it’s very tempting.”

With the field of candidates already narrow, Covid-19 created delays and backlogs in the court system. That increased the demands on public defenders and other lawyers who provide those accused of crimes with their constitutionally-guaranteed access to legal representation.

Randy Hawkes, the executive director of the NH Public Defender’s Office, said in a statement that the workloads of public defenders, prosecutors and judges reached historic highs during the pandemic. The subsequent “great resignation” across sectors led to a loss of experience throughout the criminal justice system. The public defender’s office was hit particularly hard, losing more than 600 years of experience in just a few years, Hawkes said.

In addition to the pandemic, the number of defendants with substance use disorders has also slowed the rate at which cases are closed. And changing technology has resulted in more discovery and more complex litigation that takes longer to resolve, he said.

“Many of our lawyers would prefer to exceed the caseload cap of 70, rather than allow a defendant to go without counsel,” Hawkes said. “And when I say many, I mean most. But persistently excessive caseloads not only threaten our lawyers’ ability to provide competent and diligent representation, but the workload and associated stress can also negatively impact their well-being.”

At the state level, the public defender’s office has worked with the indigent-defense subcommittee of the Judicial Council to come up with a caseload-reduction plan that to date has helped reduce the burden on public defenders, Hawkes said.

Over the past several months, the governor’s office has approved funds to increase public defender salaries to a more competitive level and has put in place a system that allows priority cases to move forward while others are put on hold until an attorney is available, he said.

Among the most recent changes aiming to help address the shortage was an order the NH Supreme Court issued earlier this month. That order follows the Bar Association’s creation of a limited active-status classification for attorneys, according to a news release from the NH Judicial Branch.

Under the order, attorneys with that classification can now be appointed as counsel for defendants who cannot afford an attorney, the release states. Those lawyers who take on three such cases in a year will have their continuing legal education requirements for that year waived, according to the order.

“There is a critical need for defense attorneys,” Sarah Blodgett, the executive director of the NH Judicial Council, said in the news release announcing the Supreme Court order. “We have hundreds of people who are entitled to court-appointed counsel but are waiting for an attorney to take their case. Both the Judicial Branch and the State have taken several steps to address this issue, and this order will make a real difference to many New Hampshire residents.”

Hawkes described steps — such as the Supreme Court order — to increase the amount of the indigent-defense workload taken on by alternative counsel as helpful and appreciated, but not enough to solve the crisis facing public defenders.

He noted that contract attorneys who take these cases “are paid at a rate that barely keeps the lights on.” That low rate of compensation has resulted in fewer private bar attorneys taking on cases for clients who can’t afford an attorney, he said.

“We greatly appreciate the willingness of members of the private bar to step up and take cases, but, frankly, the solution to the crisis requires far more than that,” he said. “The indigent defense system must be funded in a manner commensurate with the need.”

Guerriero agreed that the Supreme Court’s order will help ease the strain on public defenders, but said better funding and more substantial changes to the criminal justice system are required to solve the high caseloads.

“What they have done is appreciated. That said, it’s not a solution; it will provide some temporary relief,” Guerriero said. “The solution is a properly funded indigent-defense system.”

The state Legislature has been working on the issue from many different angles, he said, noting that he believes progress has been made.

Hawkes added, “Given the kind of cooperation we’ve seen from the courts, the judicial council, the Attorney General, the Governor’s office and members of the legislature, I’m confident that New Hampshire can and will ameliorate the current crisis in the indigent defense system relatively soon.”