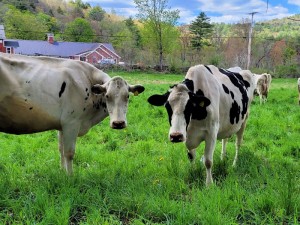 It’s legal to sell raw, unpasteurized milk in New Hampshire, but if you put that milk in an ice bucket and churn it you just might find yourself on the wrong side of the law.

The sale of raw milk ice cream may seem inconsequential, but this is the third year in a row that the state Legislature is debating whether it should be legal.

What is raw milk and why is it regulated?

Raw milk is unpasteurized. Pasteurization is a process that uses heat to kill bacteria. Pasteurization does reduce some nutrients and inactivate some enzymes in milk. According to the Centers for Disease Control, this reduction is minimal while the risk of getting sick from raw milk is very high. The risk does not deter raw milk enthusiasts, however, who share personal stories about how consuming raw milk improved their health.

While the federal government requires pasteurization for any milk crossing state lines, over half of states allow some form of raw milk sales within their borders.

In New Hampshire it is generally legal to sell raw milk. Large, licensed milk producers must pass certain safety tests. However, if a farm produces less than twenty gallons of milk to sell each day, they can sell raw milk directly to consumers without a milk license. Raw milk must be labeled with the farm’s name, contact information, and the statement, “This product is made with raw milk and is exempt from New Hampshire licensing and inspection.”

In 2019, the NH Department of Health and Human Services cited Little Red Hen Farm and Homestead in Pittsfield for selling raw milk ice cream. The department said raw milk ice cream is illegal because it is not explicitly listed in state law along with “cream.”

Inspired by the plight of the Little Red Hen, in 2020 a group of lawmakers introduced a bill to add raw milk ice cream and frozen yogurt to the list of allowed products in state law. Then the Legislature suspended activity due to COVID-19, effectively killing the bill.

In 2021 a slightly larger group of legislators reintroduced the bill as HB 95. That bill had bipartisan support, but it hit a snag when the state reported 50 cases of foodborne illness among people who drank raw milk from a farm in Rollinsford. The Senate voted to slow down HB 95 and spend more time studying the issue.

The outbreak from Rollinsford reignited the debate about whether raw milk products should be allowed in the Granite State. New Hampshire only started allowing raw milk cheese, yogurt, and so on in 2012.

At a bill hearing for HB 95, the Department of Health and Human Services reported it was difficult to enforce the labeling requirements for raw milk, since small producers don’t have to register with the state.

Other opponents of HB 95 argue that raw milk ice cream is particularly dangerous because it is more appealing to children, who may be more vulnerable to foodborne illness than adults.

Supporters of HB 95 also point out that the outbreak in Rollinsford came from a very large dairy farm. Smaller farms are much more likely to notice if their animals have a health issue that could result in bad milk. HB 95 also limits raw milk ice cream to 6-ounce containers, ideally limiting a person’s potential exposure to bad bacteria.

The New Hampshire Senate voted in favor of HB 95 on Jan. 5 after adding an additional warning to the label requirements: “RAW MILK: consuming raw milk may increase your risk of foodborne illness.” That amended version of HB 95 must now pass the House. Right now there is no scheduled voting date.

Meanwhile, representatives have reintroduced the bill in the House, as well, through HB 1187. That bill has a public hearing on Jan. 25.

With two viable bills in the works, there’s a good chance raw milk ice cream will be added to state law by the summer. Until then, Little Red Hen has taken ice cream off their shelves, but the owner says she is contemplating several new ice cream names, including “Vanilla Vigilante, Coffee Heath Behind Bars, Crookies and Cream, and Black Market Raspberry.”

Citizens Count is a nonprofit serving the New Hampshire community by providing objective information about issues, elected officials, bills, elections and candidates. This articles is being shared by partners in the Granite State News Collaborative. For more information, visit collaborativenh.org.