A remarkable day of celebrating and giving back in Manchester

After Covid, a reunion with the community at a 3v3 basketball tournament 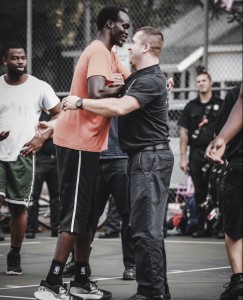 One of the hardest parts of social distancing through Covid-19 was missing community events and opportunities to connect with friends and neighbors.

The Nick Carey 3v3 Basketball Tournament in Manchester has been one of my favorite events over the past decade. It was canceled last summer due to the pandemic, so presenting it again this year felt both important and special. I am honored to play a role in this incredible event.

The Nick Carey 3v3 Basketball Tournament was created by Manchester firefighter Jim Terrero in partnership with Manchester Professional Firefighters IAFF 856. It started off as just a tournament in Sheridan-Emmett Park across the street from Beech Street Elementary School and has since evolved into a community block party. Nick Carey, who had long been associated with the event, passed away in 2016, and the tournament was renamed in his honor.

After missing a year, this summer’s event felt especially joyful. There was an incredible sense of unity and connectedness. And it was a great party! There was live music with local artists performing everything from Afrobeat (African pop music), to reggaeton (Spanish reggae music), to hip hop and pop music. Manchester firefighters were there, using their truck to make sprinklers for the kids to play in. There was even a free Afrobeat dance class taught by Millicent Alhamis. Millicent is a remarkable young woman who graduated from Manchester’s Trinity High School, earned an undergraduate degree in biology from St. John’s and is now working on a master’s degree in information technology.

There was delicious rice, chicken and empanadas from Don Quijote restaurant. Sandra Almonte, the owner, generously donated beyond what was ordered for the event. The food was a hit – everyone loved it. I am proud to say that out of 250 people there, anyone who wanted food was able to eat. It was such a happy day with lots of laughter and celebrating.

As always, Jim did a fantastic job running the tournament. He never uses refs, he makes the teams call the shots. When the players know they have to manage the calls, it elevates their engagement, involvement and accountability.

There were three tiers of players – out-of-school, high school, middle/elementary school – and there were cash prizes for the winning teams in each category.

This year, the prizes were bigger than ever. We’re grateful to the Manchester Professional Firefighters IAFF 856 and a generous community leader who donated to make those prizes even more exciting. There were even more prizes awarded for a dance competition.

I met tournament founder Jim Terrero more than two decades ago, when we were ELL (English language learning) students at Beech Street Elementary.

Jim is originally from the Dominican Republic and, just like me, immigrated to American with his family for a better life. Our paths would cross again when we were both in college and started working for a Manchester after-school program called BRING IT! (which stands for Bringing Refugees, Immigrants and Neighbors Gently Into Tomorrow).

BRING IT! offers free homework help, career exploration, art, soccer and dance classes. Jim planned the schedule of activities, organized the buses and encouraged and disciplined kids. I mostly focused on teaching dance and some of the career exploration programs.

Jim and I both wanted to give back to the community we grew up in. Even after we graduated from college and started careers (Jim is the first Hispanic firefighter in Manchester), we both devoted time to the community with BRING IT! and other community events. When Jim said he wanted to start a tournament, I was immediately on board. He focused on basketball and on working with the city and the fire department to sponsor. I planned the entertainment and performing arts elements.

The Nick Carey 3v3 Basketball Tournament takes place in what is, without a doubt, the most diverse square mile in the entire state. There are families from dozens of countries, speaking dozens of languages. I know what it’s like to walk in their shoes, because I have. And I know how meaningful it is to have people from your own community create a space and a gathering for no other reason than to be together.

The event was incredibly fulfilling for me. It brought me so much joy to see kids I have worked with at BRING IT! – who I have not seen in the last year and half – come up and say hello, to see them take the community dance class and see them enjoy a fun event that was created just for them. This is the embodiment of the principles I use in my work as an education and workforce consultant. It’s a reminder that one must go alongside one’s community, participate in it, to figure out how to contribute authentically and meaningfully.

We are already looking forward to next year’s Nick Carey 3v3 Basketball Tournament. In the meantime, Jim and I are collaborating with our friend (and fellow BRING IT! volunteer) Nitanga Jean de Dieu, who will be hosting a soccer tournament at Sheridan-Emmett Park in August.

Deo Mwano, a business owner and community advocate based in Manchester, is principal of Deo Mwano Consultancy.