New Hampshire places its bet on education to convince the skeptical 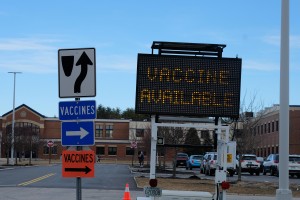 Convincing the skeptical to get the Covid-19 vaccine is a long and precarious process.

David Ross, the administrator at Hillsborough County Nursing Home, has been chipping away at hesitancy among staff and some residents since January.

“It’s a delicate balance,” he said. “We don’t want people to feel — I don’t want to use the word harassed — but harangued at work. They made a personal decision. You know, I’m trying to be respectful of that.”

But Ross is also acutely aware of how quickly one case of Covid-19 can spiral into disaster. The virus killed more people at his nursing home than any other similar facility in the state — across two separate outbreaks, there were 254 infections among staff members and 52 people died.

“A good analogy is a match to a hay bale,” he said. “It would just ignite.”

Likely because of the particularly severe outbreaks, Hillsborough has an impressive percentage of fully vaccinated employees compared to most nursing homes across the state and country — 79% of his staff and 96% of his residents are fully vaccinated.

A lot of the vaccination advocacy comes from his staff who are trying to avoid a repeat of the last year.

“We lived such an experience here that I think that there’s a lot of peer pressure within the building for folks,” he said. “When you ask someone whenever we have an upcoming clinic, ‘oh have you been vaccinated yet?’ their eyes just roll because they’ve been peppered so many times.”

Still, some of his staff, like Mary Cameron, have maintained that they don’t want to get the vaccine.

Cameron has worked at Hillsborough for 20 years in the laundry department. Though she didn’t directly care for the ailing residents, she still felt the effects of Covid outbreaks. During the pandemic, she layered on gowns, gloves and masks to handle linens from residents with the virus. Like all other staff, she was subject to Covid-19 screening and testing requirements.

“I’m kind of watching and waiting just to see how effective it is,” she said. “I don’t want it to cause another issue inside of me.”

She said she worries about the side effects her colleagues have experienced from their shots — side effects like headaches, tiredness and chills are relatively common and signal the body’s immune cells are doing their jobs.

Cameron also brought up an incident Ross has been fielding several questions about. Last week, a fully vaccinated staff member at Hillsborough tested positive for the virus. While vaccines offer nearly 100% protection against hospitalization and death from the virus, they don’t promise complete protection against developing the virus in the first place.

Even though Ross saw the incident as a testament to the effectiveness of vaccines — the employee had very mild symptoms and no other residents or staff members on her unit tested positive for the virus — he said it deterred a lot of people who were on the fence about getting vaccinated.

“Maybe in a couple of years I would consider it if it worked really well on everyone else,” Cameron said. “I’m just not interested.”

‘Not a perfect number’

As the percentage of fully vaccinated Granite Staters has quickly climbed over the last few months, 18% of the population has held firm that they would “almost certainly” not get the vaccine, according to a recent poll from the UNH Survey Center.

Andrew Smith, a professor at UNH who headed the survey, has been tracking this group in monthly surveys since the first concrete details about vaccines started emerging in January.

Using the demographic data he’s collected, he’s pieced together a vague archetype of this 18% of the state’s population. Statistically, members of this group are likely middle-aged, live in a rural part of the state, identify as Republican and have been educated up to the high school level.

“You can generally characterize them as essentially the kind of voters that got Donald Trump elected in the 2016 election,” Smith said.

Like Cameron, many respondents cited a lack of trust in the vaccine’s safety and skepticism about the vaccine’s effectiveness as the reasons they would be forgoing their shot.

To a certain extent, this wave of unwavering resistance to the vaccine has been built into the state’s vaccination plans.

“Hopefully we will have as high of an uptake as possible. We understand, though, at the end of the day 30% to 40% maybe might not get the vaccine,” said Gov. Chris Sununu at a recent press conference. “That’s just a reality.”

But the reality in which more than a third of Granite Staters refuse the vaccine threatens the possibility that New Hampshire will reach “herd immunity,” when enough people are immune to the virus so that it can no longer spread.

Anthony Fauci, chief medical adviser to the president, has suggested that between 75 and 80% of the population would need to be vaccinated in order to achieve herd immunity.

Michael Calderwood, the chief quality officer and infectious disease expert at Dartmouth-Hitchcock Medical Center, said the exact percentage is largely dependent on the contagiousness of the virus and the vaccine’s effectiveness at preventing the virus from spreading – both of which have been up for debate since new variants have taken hold in the United States. He said Dartmouth-Hitchcock is aiming to vaccinate more than 70% of its staff.

With no plans to mandate the Covid-19 vaccine, the state is hoping that education will help change some minds.

The campaign — which includes social media posts, television ads and billboards with bright colors and peppy slogans like, “This is your shot to get back to normal” — plans to target younger residents.

Over the next couple weeks, the state will also start making vaccines more readily available at doctor’s offices to “enable those one-on-one conversations that some folks want before making the decision to get vaccinated,” said Brandon Pratt, a spokesperson for Sununu.

Dr. Michael McLeod, the associate chief clinical officer at Concord Hospital, said he’s often able to talk through any concerns his patients have about the vaccines.

After he explains the vaccine approval process and breaks down the data about side effects, many people’s hesitancy softens.

“It wasn’t designed in somebody’s garage, you know like, ‘hey, we’ll just give it to the population see what happens,’” he said. “I think most folks feel better about that, and I get a good number of folks say ‘based on that, I think I might change my mind.’”

But he also acknowledged that there’s a limit to what this type of conversation can accomplish.

“Education helps a good amount of the time,” McLeod said. “But for someone who’s never had a vaccine in the last 30 years now, they don’t all of a sudden say, ‘Oh, that totally makes sense’.”

In fact, for many of the vaccine-averse, any amount of cajoling, incentivizing or mandating seemed to have the opposite effect. About a quarter of respondents said they would be less likely to get the vaccine if a personal doctor recommended it. Nearly a third of respondents said they would be similarly dissuaded if friends asked them to get vaccinated.

The survey proposed nine scenarios like this: your employer required the vaccine, the vaccine was required to fly on an airplane, your family received the vaccine and experienced few side effects. In response to each question, more than half of respondents said the scenario would not change the likelihood that they will get the shot.

“I think it’s pushing against that libertarian streak that they shouldn’t be required to get any sort of medical treatment that they don’t want,” Smith said.

Smith doesn’t think the hesitancy will last forever. As more freedoms are granted to those with proof of vaccination, the 18% will gradually shrink, he predicted.

“People say a lot of things and change their minds later,” he said.

Already, Ross has seen this play out on a small scale in his nursing home. Once he announced that vaccinated staff would no longer need to quarantine after traveling, thereby decreasing the number of days-off they had to allocate for each vacation, 30 people signed up for a vaccine appointment.

Cameron said even though that particular requirement didn’t incentivize her, she would oblige if the facility mandated the Covid vaccine, a possibility that Ross said may be possible but unlikely in the near future.

Until then, Ross and his employees will keep respectfully, but forcefully, educating about the vaccine.

“We’ll just keep kindly wearing them down,” he said.