Proposal could change how evidence is disclosed after a conviction

Judicial system takes on ways to deal with ‘exculpatory evidence’ 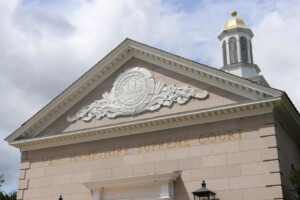 New Hampshire’s judicial system is grappling with how to ensure prosecutors share new evidence that arises after someone is convicted of a crime and could prove their innocence.

But both local prosecutors and defense attorneys are raising concerns about the language of a proposed rule that would clarify the process for how that information is disclosed.

On Dec. 9, members of the NH Supreme Court’s Advisory Committee on Rules, chaired by Associate Justice Patrick Donovan, held a public hearing on that proposed change, which outlines the steps prosecutors should take if they discover so-called “exculpatory evidence” that could lead to a new trial or dismissal of charges in completed criminal cases.

After hearing two hours of conflicting public comment, Donovan called for the creation of a subcommittee to review concerns and potential new language for the rule, with an additional public hearing scheduled for next June.

The debate over how to ensure convicted defendants are afforded legal protections in the state comes as the nation grapples with recent exonerations, including for defendants who wrongfully served decades behind bars.

The proposed rule was drafted by the NH Bar Association to “proactively provide guidance to prosecutors” on the steps they should take when new evidence comes to light, according to the proposal. The bar said the rule is “not intended to suggest any existing deficiency in how New Hampshire prosecutors conduct themselves.” It is based on model language from the American Bar Association that slightly less than half of the states have already adopted.

As originally drafted, the proposed rule would require a prosecutor to alert a court when “new, credible and material evidence creating a reasonable probability that a convicted defendant did not commit an offense” surfaces.

Prosecutors in New Hampshire said they believe they are already required under existing law and precedent to turn over exculpatory evidence, including material in police personnel files. The proposed rule would require disclosure to the courts and the defendant, as well as a requirement that prosecutors undertake an investigation in the underlying case.

Senior Assistant Attorney General Geoffrey Ward told the rules committee that his office was concerned about the time requirements involved in undertaking an investigation. He also stressed that he believes prosecutors already have a duty to disclose exculpatory information, no matter when it comes to light.

“It is nothing new,” he told the committee.

But some criminal defense attorneys raised examples of glaring omissions, including in the landmark 1995 case in which the murder conviction of Carl Laurie was overturned after the troubling history of a detective involved in the case came to light.

“The current situation clearly doesn’t work,” said Gary Apfel, a member of the NH Association of Criminal Defense Lawyers. Apfel cited more recent cases, including that of former State Trooper Haden Wilbur, in which he argued exculpatory evidence in the possession of prosecutors or law enforcement was withheld.

But Apfel and other defense attorneys raised their own concerns with the wording of the proposed rule and the possibility that it would create different standards for when information needs to be disclosed based on if it comes to light before, during or after a trial concludes.

Defense attorneys also were concerned about the inclusion of a “safe harbor” provision that would protect prosecutors from punishment if they violated the new rule while acting in good faith, a provision not extended to other attorneys, they contend.

Rather than voting on the proposed rule, Donovan requested that the committee take more time to review the possible impacts of the language, as well as consider alternative rules. That motion was adopted on a unanimous vote, with an additional public comment period scheduled for next summer.