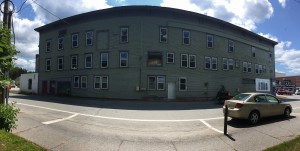 “This gem of a building is getting a 100-year upgrade,” said Ben Southworth of Garland Mill, construction manager for the project.

The 11,000-square-foot Noyes building was purchased the by the Northern Forest Center in 2018 as part of its community investment work in Lancaster with the goal of helping to revitalize the downtown through the renovation.

The center has listed the building on the state Register of Historic Places and worked with Alba Architects of North Woodstock, a historical consultant, and Garland Mill to plan a renovation that will restore the building’s historic integrity.

Under the plans, the building’s renovated first floor will provide a new home for two programs of Taproot Farm & Environmental Education Center, a Lancaster nonprofit. The new space will enable Taproot to expand the Root Seller Marketplace, which provides access to local foods from more than 50 of the region’s growers and producers. It will also be the headquarters of Taproot’s North Country Gleaners, a program that collects surplus produce from farms and backyard gardens to distribute to those in need.

The second and third floors of the building will be remodeled to create six downtown apartments designed to attract professionals and young families seeking to live on Main Street.

“We want the Lancaster area to benefit from this project from the beginning,” said Julie Renaud Evans, program director for the Northern Forest Center. “Working with designers and builders from the region is supporting local jobs now, and when the building is complete Taproot’s expanded operations and the new apartments should both make a very positive contribution to the vitality of Main Street.”

Garland Mill has hired Commonwealth Construction of Lancaster to do the exterior façade work and window installation. Cantin Construction of Northumberland will handle interior structural work, and David Chessman of the Pleasant Valley Road in Lancaster will do the precise excavation work underneath the building.

In addition, JA Corey Electric of Littleton will be doing the electrical work and Northwoods Manufacturing of Lancaster will be doing the countertops in all kitchens. Southworth said Garland Mill expects to use other local contractors to complete the mechanical systems, but that work has not yet been sent out for bid.

In the late 1800s, the building became home to Parker J. Noyes Pharmaceutical Company, which developed the sugar-coated pill and an automated machine to produce tablets at the rate of 5,000 pills per hour. The company moved to another location in Lancaster in the 1980s, where its successor, Trividia, still operates.