Some 1,900 New Hampshire businesses – a little less than half of the number that applied – will be getting an 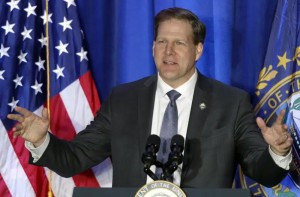 average of $50,000 through the second round of the state’s Main Street Fund.

“It’s not chump change,” said Gov. Chris Sununu Thursday in a press conference dominated by the news of record coronavirus numbers and a new statewide mask mandate. “It is money to pay bills, pay taxes, to keep folks employed, to keep these businesses moving forward and keep them viable, which is very important if you look at the overall economic and fiscal state of the state.”

The average award is not that much lower than the amount provided in the first round of the Main Street Fund. That time 5,393 businesses received an average of $63,500. But there were far more applicants and the state distributed a total of $342.4 million, compared to $95 million this time around.

Also, a total of 4,200 businesses applied for Main Street 2.0 – less than a third of the number of applicants in the first round.

The funds are distributed via a simple formula. Applicants receive a certain percentage of the difference between last year’s actual revenues and this year’s anticipated revenues, minus other aid received (from such sources as the Paycheck Protection Program). The total amount is capped at $350,000.

Main Street 2.0 has another twist.

Applicants do have to return all the money “if there is fraud, intentional misrepresentation of projected losses, or a failure to submit all required final reporting,” according to by the DRA.

Under the CARES Act, it would appear any of the returned money would have to be sent back to the U.S. Treasury, but that may not be all the money the state stands to lose.

As of Nov. 13, according to the latest GOFERR report, $874.5 million of the $1.26 billion has been allocated and $374 million has been spent (that unspent money includes the Main Street money that is just going out the door now).  So there is a good chance that another chunk of change would need to be distributed in the next month. Main Street 3.0 anyone?