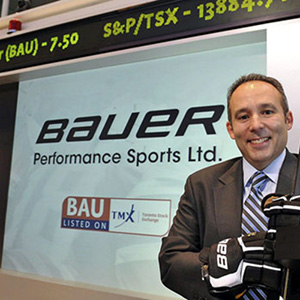 A federal judge has approved a $13 million class action settlement with executives of the former Performance Sports Group, meaning that checks will go out to as many as 18,000 shareholders.

It will also mean that former PSG CEO Kevin Davis, who now runs a smaller company in Salem, will finally speak his mind about the litigation “The system is broken,” he said, arguing that the class action securities benefited attorneys more than the shareholders. The plaintiffs’ attorneys are expected to receive $4 million of the $13 million settlement in legal fees.

It was partly due to legal filings over attorneys’ fees that court approval was held up this past year. But U.S. District Court Judge Gregory Woods, sitting in Manhattan, ruled that the 28 percent legal fee totaling $3.6 million was fair and reasonable.

The court order, issued Nov. 21, marks the end of the long saga of the Exeter-based PSG, formerly and currently known as Bauer Hockey, which went public in 2014 to great fanfare after it was formed in a $330 million merger of sports gear company Bauer Hockey and iconic baseball equipment maker Easton.

After the company reported significantly reduced earnings in January 2016, investors filed suit alleging that PSG, Davis and his successor, Amir Rosenthal had for years juiced quarterly profits by threatening to reduce wholesale discounts unless retail chains increased their order sizes.

This aggressive sales tactic blew up in PSG’s face, shareholders said, when demand plummeted over the course of 2016 because retailers were faced with a buildup of unused inventory. Investors said the company and its top brass silenced internal critics of these ill-fated sales strategies and lied to the public, painting a rosy picture of a well-run company with solid earnings.

The company filed for bankruptcy on Oct. 31, 2016 listing $608 million in debt. Eventually, its assets were sold in February 2017 to an investor group Led by Sagard and Fairfax Financial in a deal valued at $575 million.

But the shareholder suit dragged on, and a settlement was reached last December. The all-cash deal requires former Davis and Amir Rosenthal, through the company’s directors and officers insurance policy, to compensate potentially thousands of class members who purchased the company’s common stock between January 2015 and October 2016.

The agreement followed the depositions of numerous former PSG executives and relied on some 21.2 million pages of documents subpoenaed from the company’s auditor, KPMG, and former investor Kohlberg & Co., the investors said.

However, legal wrangling continued and the bills piled up. In the end, the judge ordered them paid to the lead attorney, a national class action litigation firm called Cohen Milstein Sellers & Toll PLLC.

The settlement means 18,000 shareholders will collect an average of $500 per investor, but the amount varies depending on the number of shares held, how long they were held and when the loss they took. Davis said that amounts to 30 cents of share.

“If the accusations had any merit would they be settling for 30 cents a share?” he said. He called the complaint “ridiculous accusations that allow someone to sue you without any proof. I know they aren’t true.”

In the end, he didn’t settle, he said, his insurers did because it would be cheaper to do so than continue to litigate. He claimed he didn’t do anything wrong, and that the only mistake was bad timing – making a major acquisition right before a major sports retail chain went bankrupt. He also defended setting up his own stores, a move that angered many retailers.

“I still think it was a great decision,” he said. “But the timing turned out to be terrible.”

But that’s beside the point, he said

“If you want to run the company better, you can say that. But to say I’m a criminal, you can’t say that. But in this country, you are allowed to.” He noted that in Canada, where the company was also publicly traded, no securities suit was brought forth. He said that is because if the plaintiffs lost they would have to pay legal fees.

Bauer Hockey is now a private company still located in Exeter. Attempts to reach officials there were unsuccessful.