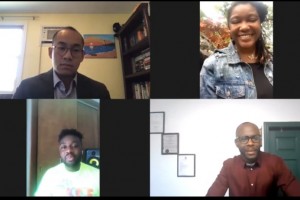 On Oct. 5, Stay Work Play NH invited its three 2020 Rising Stars Award recipients to gather for a virtual roundtable discussion on the state of diversity in New Hampshire.

Stay Work Play NH Young Entrepreneur of the Year Shaquwan’Da Allen of Manchester said she felt a sense of culture shock when she left Boston to become a culinary student at Southern New Hampshire University in 2012. Eventually, Allen discovered a love of hair styling and helped to pass a bill that allowed professional hair braiding to be done without a cosmetology license.

Allen says that cosmetology schools in New Hampshire do not teach hair braiding, and the passage of that bill allowed those seeking to just braid hair the chance to avoid cosmetology training that would not benefit them.

Despite that victory, she’s faced other struggles in the development of her hair braiding business, ranging from a lack of marketing and hair braiding educational services in the state to a lack of physical locations for her salon, which she says has a different type of culture from most other salons in New Hampshire.

Still, she hopes that her example can help other African Americans in the area to join her as natural hair braiding professionals.

“Our talent and our craft can’t be closed behind doors anymore,” she said. “This is our craft, this is how we express ourselves and now we have a foundation to do that.”

Toe, an organizer with a group called Change for Concord, discussed events his group put together letting people know their rights, as well as efforts to bring lights to a local park used frequently by the city’s minority population and efforts to bring together people of color with the city’s police officer for dialogue and increased understanding.

One moment that stuck out for him came when, several years ago, a few students at a Concord school confused innocent recess behavior with gang activity, something that ironically led those students to face criminal charges and eventually pushed them into real gang activity.

Ho, a doctor of psychiatry at Dartmouth-Hitchcock Medical Center, said that as an Asian American he was acutely aware of few other Asian Americans in the area when he moved to the Upper Valley. However, he was pleased when he saw the support for minority groups from area residents following the death of George Floyd.

“The presumption is that New Hampshire is not a very diverse plate, but in the Upper Valley people really care,” he said. “Just seeing that people here are supportive of social justice causes must be a welcome sign for members of minorities traveling from elsewhere in New Hampshire.”

When asked what advice they would give to members of minority populations moving into New Hampshire, the trio believed the newcomers should follow their passions and be honest to themselves above all else.

“If you follow the deep-seated desires of your heat, it will flow,” said Toe. “You don’t necessarily have to make a mark, the mark will eventually make itself.”

The three will be honored in a virtual event on Oct. 15 hosted by Stay Work Play NH, New Hampshire Public Radio and Eversource, with the selection of New Hampshire’s “Coolest Company for Young Professionals” also being announced.