Why are so few cases brought by the New Hampshire DOJ’s Civil Rights Unit? 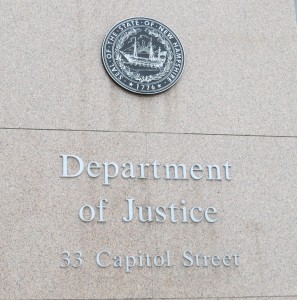 As the spotlight in New Hampshire focuses on social justice amid statewide protests calling for reform, the state’s Civil Rights Unit in the Department of Justice continues to bring few civil rights cases to court.

The Civil Rights Unit, currently staffed by one full-time attorney, has brought a total of five cases to litigation since it began in December 2017. Assistant Attorney General Sean Locke, the current head of the unit, said that breaks down to one case in 2017, two in 2018, two in 2019, and none yet in 2020.

The number of cases brought to court doesn’t show the full picture, however, Lock said. In 2018 the unit dealt with 40 complaints, resulting in 19 formal reviews being opened. The reviews involve speaking to witnesses, reviewing reports and conducting investigations.

In 2019, the unit received between 75 and 76 complaints, opening 19 reviews. In 2020, the unit has so far received 66 complaints and opened six reviews. The unit typically focuses on civil rights violations, like the case of Priscilla Protasowicki, the Jackson innkeeper accused of trying to physically remove two Muslim guests from her Covered Bridge Riverview Lodge. Protasowicki ended up being fined $10,000 after Elizabeth Lahey, who held the position before Locke, brought her to court.

“Last year we might have filed two matters in court, but the other cases were all being investigated and reviewed at the same time,” Locke said. “The work of the unit doesn’t stop when we go to court.”

Locke said he is the first full-time permanent staffer assigned to work the Civil Rights Unit, a function of a budget change made in the past six months. Locke’s position is budgeted at a little more than $100,000 a year, according to the 2020-2021 state budget. The change makes the position a permanent full-time job as opposed to a temporary full-time job, as it was when Lahey led the unit.

According to budget records, such a switch was always planned for the position. Aside from Locke and his assistant, the unit is able to pull in staff and resources from other units within DOJ as needed.

The unit was created at the end of 2017, when the state was reacting to high-profile cases involving alleged civil rights abuses. This included the case of a biracial Claremont boy who had a noose tied around his neck by older white children. That case caused national outrage and moved Gov. Chris Sununu to create the Governor’s Advisory Council on Diversity and Inclusion and the Civil Rights Unit.

The investigation into the Claremont case resulted in the Attorney General’s Office finding no hate crime was committed, according to a report released last year.

“I had extra responsibilities on top of it,” Lahey said.

Lahey declined to says if she thought the unit was assigned enough resources. She has since moved to private practice.

‘There isn’t a whole lot’

Manchester lawyer Donna Brown, a member of the New Hampshire Association of Criminal Defense Lawyers, said she has not had a lot of interaction with the Civil Rights Unit, but she and her clients are hesitant about its connection to law enforcement.

“The fact they’re associated with the AG’s office gives me concern,” Brown said.

Rogers Johnson, president of the Seacoast NAACP and chair of the Governor’s Advisory Council on Diversity and Inclusion, sees the unit as a responsive part of the state’s civil rights infrastructure. The low number of cases brought by the Civil Rights Unit is a function of there not being many civil rights cases in New Hampshire that would qualify.

“Show me the case, and I guarantee they’ll be on it because they’re dedicated,” Johnson said. “In terms of civil rights cases, there isn’t a whole lot.”

Johnson and Locke both said many cases are referred to the New Hampshire Human Rights Commission, which deals with complaints of housing and employments discrimination, as well as complaints of sexual harassment, and discrimination by sex, marriage and race.

“Our role isn’t to replace what they do,” Locke said. “Our role is to augment them and work collaboratively with them in enforcing the law.”

The commission’s investigators look into complaints and encourages the parties to resolve matters through a settlement or mediation. If the matter cannot be settled, the investigator will issue a report, and if probable cause is found, the case moves to a public hearing before the commission. The commission then hears evidence and renders a decision.

Locke said the commission can send cases to the Civil Rights Unit if the investigators believe it belongs with the Department of Justice, and the unit can send complaints it receives to the commission, depending on the nature of the complaint.

The Department of Justice’s Civil Rights Unit also trains and educates members of law enforcement agencies on how to investigate possible hate crimes and has developed a set of protocols for such investigations. Locke said the training and protocols have started becoming part of the New Hampshire State Police Academy training for new officers.

“These protocols have gotten attention from AG’s offices around the country,” Locke said.

Locke said he will also work with other state agencies to go over the civil rights laws to make sure the agencies can recognize possible discrimination and deal with it in an appropriate manner.