We need to hire three people for my New Hampshire biotech company, but the worker shortage is standing in our way 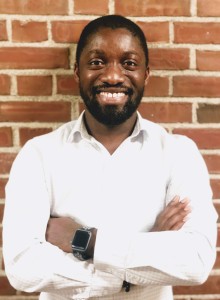 Ever since my asthmatic childhood, I dreamed of building technology to help the estimated 545 million people worldwide who suffer from respiratory diseases. When it came time for college, I left my native Ghana to attend Dartmouth, where I studied engineering as an undergrad and a Ph.D. candidate. By the time I graduated in 2019, I had my patented invention: a pendant-like device leveraging AI to continuously monitor the lungs.

To date, our company Clairways, has raised $1 million in investment capital and has funding from two federal agencies. One pharmaceutical company will soon be piloting our device in a clinical trial. We’re in talks with another major pharma company for a project with potentially global impact. This interest makes sense; our product enables pharma companies to objectively track respiratory components during clinical trials, which helps speed up the development of life-saving drugs. Our technology provides both moment-by-moment data and a long-term picture of respiratory health. The pandemic has laid bare the necessity of these technologies.

While Clairways is growing, one crucial pain point relates to hiring: it is difficult to find qualified engineers to hire in the Upper Valley. In our attempts to hire, we’ve found that there is a limited pool of American applicants with the necessary technical skills. While the greater Boston metropolitan region is near and boasts a larger pool of technical talents, there isn’t much appeal for applicants to move to rural New Hampshire.

International graduates of schools like Dartmouth are a great secondary option, but immigration policy makes them nearly impossible to hire. That’s a serious problem for us and for many small tech companies.

The worker shortage is real; there are 13 STEM jobs posted for every unemployed STEM worker, according to New American Economy.

I was encouraged by recent moves to address this problem. Recently, the House of Representatives passed the America Competes Act, paving the way for more international STEM Ph.D.’s to apply for permanent residency. And earlier this year, the White House introduced several measures to help more high-skilled immigrants, including international STEM students, work for American companies.

This could be a game-changer for companies like mine — but a temporary one. Most of the measures only provide short-term visas, which means any international talent we hire will inevitably have a limited impact. Ultimately, these two shifts represent piecemeal change at best. If America truly wants long-lasting economic vitality, we need robust immigration reform.

It’s incredibly difficult to hire an international worker, even when there are no American applicants. We have to spend large sums to sponsor their temporary visa without any guarantee they’ll receive one; the visas are granted by lottery, and last year, 300,000 people applied for 85,000 spots. Even if we do secure a visa, my employees could spend decades in limbo waiting for their green card. That’s partly because every country gets the same number of green cards each year, regardless of population size. As a result, applicants from India and China have wait times of up to 150 years.

As a Ghanaian and an advanced degree holder, I was fortunate. After graduate school, I worked in the U.S. for two years under a temporary training program for STEM graduates. Eventually, given my doctorate degree and valuable contributions to my industry, I sought a national interest waiver and self-petitioned for a green card. Since I’m from a low-population country, I received my permanent residency only a year and a half later.

The new White House regulations will allow a larger spectrum of international STEM graduates to take advantage of the same training program I completed. But there’s no guarantee that these grads, especially those from high-population countries, will be able to stay long term. At this early stage, our young startup simply doesn’t have the bandwidth to cover the expense and time required to enter the high skilled visa lottery.

We are currently trying to sponsor one employee now, but the process is a resource drain. Meanwhile, our three unfilled jobs are dramatically restricting our output and growth.

That slows down our time to market, which means pharma companies can’t use our products to speed up drug development, which ultimately hurts Americans suffering from respiratory health issues.

Industry leaders across STEM fields are making the same plea: We applaud the new White House rules and the House passage of the America Competes Act, but we need more to be done. We need Congress to reform the green card rules that put high-population countries at a serious disadvantage. We need them to clear the current green card backlog. And we should be awarding green cards to international STEM graduates so that we don’t lose them to countries like Canada and Australia, which are considerably more hospitable to international talent.

That’s important for towns like Lebanon, where Clairways is based. Dartmouth turns out brilliant graduates, but many want to move to big cities. International students are an exception. They’re much more willing to take a job in a smaller city or town and put down roots there.

Further, most New England states have aging populations. But from New Hampshire to Massachusetts to Maine, immigrants are much more likely to be of working age. We need this fresh blood to power our businesses and fuel our public services.

That’s why I started my company here in Lebanon. But we can’t innovate, expand or compete if we’re perennially short of employees. Our device will help ease the suffering of millions with chronic respiratory diseases, so I make this appeal with urgency. Congress needs to get serious; give American businesses their workforce.

Justice Amoh is co-founder and chief technology officer of Clairways in Lebanon.