Utilities, municipalities battle over how property value is determined

Inflated assessments could be costing ratepayers

With municipalities and utilities still at polar opposites over how to value utility property, a New Hampshire legislative committee — after wrestling with a controversial bill to address the issue for nearly a year — has shrunk away from recommending a legislative solution and instead proposed convening a commission to further study the thorny issue.

For utilities, the property taxes on poles, wires, pipelines, land and substations are operating expenses recovered through the rates they charge customers. The utilities claim that a growing number of municipalities are inflating the values of their property, which are higher — in some municipalities, much higher — than those calculated by the NH Department of Revenue Administration in administering the statewide utility tax.

As a result, they say, similar, even identical, property, differs in value among municipalities, and excessive property values are reflected in inflated utility rates.

New Hampshire Electric Co-op’s property taxes have risen 70 percent in the last five years “because a number of towns where we do business increased their assessments … by enormous and unjustified amounts,” says CEO Steve Camerino.

A third of all municipalities apply the DRA’s assessments, but most local officials question the validity of the agency’s method of valuing the utility property while insisting that discounting the value of utility property would shrink local tax bases and swell property tax rates.

House Bill 324 would have stripped municipalities of their statutory duty to appraise utility property when levying municipal property taxes, and required them to apply the assessed values calculated by the DRA.

The bill was supported by the major utilities as well as the Business and Industry Association and the Consumer Advocate of the Public Utilities Commission. It was opposed by the New Hampshire Municipal Association. The bill was retained in committee and, after a subcommittee failed to reconcile the opposing interests, in November was amended to form a study commission.

Steve Camerino, president and CEO of NH Electric Cooperative, told a House Science and Technology Committee hearing in November that the co-op’s property taxes, which represent 11 percent of its operating budget, have risen 70 percent in the last five years “because a number of towns where we do business increased their assessments of the value of our property by enormous and unjustified amounts.” 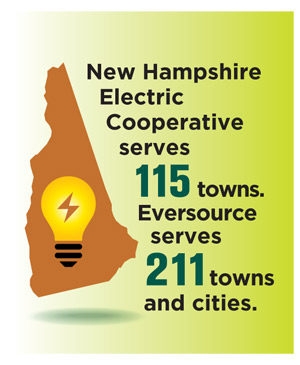 The NHEC serves 115 towns, and in 68 of them the municipal assessment exceeds the DRA assessment by as little as 1 percent and as much as 299 percent. In 38 towns, assessments ranged between 56 percent and 299 percent above the DRA appraisals, which the NHEC calculated represents $112,662,760 in property value.

Camerino said that the aggregate increase in property value added $34 to the annual bill of residential customers while representing increases of $965 for a convenience store, $11,000 for a supermarket and $74,000 for a ski area.

In tax abatement cases both the towns and utilities engage legal counsel and expert witnesses at significant expense, and taxpayers and ratepayers, as Camerino reminded the committee, “pay for all of it. When I say all of it, I mean all of it. The system is broken. It’s bad energy policy and bad tax policy.”

Meanwhile, a team of municipal assessors and attorneys, along with the NH Municipal Association, calculated that, if municipal assessments were displaced by DRA appraisals, property tax rates would increase in 66 percent of the 243 municipalities and unincorporated places in the state. 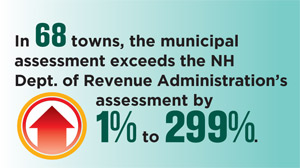 However, the impact on property-tax rates would be greatest in municipalities with generating facilities and high voltage transmission lines.

Municipal officials challenged the unitary method of appraising utility property applied by the DRA, which first values all the property owned by a utility then allocates shares of that value among the particular municipalities where the properties are located by capitalizing the net income of the property and depreciating its original cost. They referred to the BTLA, which found that “the portion of the total value assigned to each municipality in these appraisals is simply an arithmetic allocation based on historical cost, not the independent opinion of market value of a professional appraiser or assessor” and likened the process to the use of a “black box.”

The state Supreme Court has recognized five techniques for assessing the fair market value of utility property, which may be applied singly or in concert. 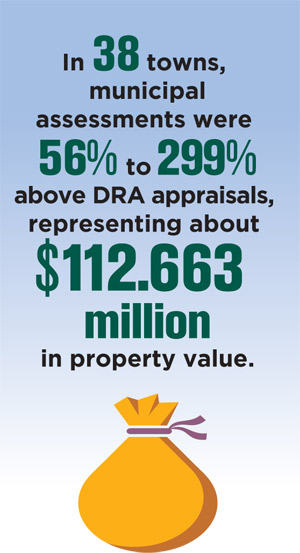 The value of the property can be estimated by: comparing the sales prices of comparable properties; by capitalizing the net income it produces; by calculating its original cost less book depreciation; or by calculating its cost afresh less depreciation. The court also accepts the unitary method applied by the DRA, while upholding rulings by the BTLA that it has been misapplied in particular cases.

In 2010, the justices held that “all of the enumerated approaches are valid, but all also have weaknesses.”

In ruling on the most recent round of abatement appeals in June, the justices remarked that “the substantial variance between the DRA’s assessments and the local assessments is troubling.” Noting that “the legislature has provided no guidance on the methodology that should be used to determine utility property’s full and true value,” the court found instead it “has sanctioned a system under which the DRA and municipalities are free to pursue conflicting methodologies that can, and often do, result in substantially different assessments of value.”

The justices continued: “As we had occasion to observe more than 20 years ago, disputes such as this one may be avoided, or at least reduced in complexity, by the adoption of a uniform method of utility valuation.”

The utilities and the Municipal Association each offered an amendment to HB 324, which would have prescribed a uniform method of appraisal. Neither amendment would have applied to generating facilities. Likewise, both amendments provided for a transition period during which the adjusted assessed values would be introduced incrementally.

Otherwise, as Rep. Howard Moffett, D-Canterbury, remarked, the amendments represented “stakes at opposite ends of the range of possibilities.”

Like the original bill, the amendment proposed by Jonathan Giegerich, tax manager of Unitil, would transfer authority for appraising local utility property for municipal property tax purposes from the municipalities to the DRA.

Cordell Johnston, speaking for the Municipal Association, discounted the amendment as “basically the same as the original bill.”

He pointed out that the proposed appraisal method mirrored the approach the BTLA rejected in the most recent abatement appeals. Moreover, he said that the same method of appraising transmission and distribution systems located within the state would be applied to international and interstate power lines and pipelines because their tariffs are calculated differently and are economically distinct.

He explained that a Hydro-Quebec transmission line that runs from Quebec to Massachusetts through Vermont and New Hampshire has a book value of close to $5 million and originally cost nearly $280 million. Depreciating it by 80 percent, he said, would leave $56 million to be shared among 20 towns. But, he said, the company has accepted total values of more than $58 million in settlements with just five of these towns.

The amendment, Johnston said, not only transfers the authority to assess local property from the municipalities to the DRA, but also reverses the process of appealing assessments to the BTLA. Municipalities appealing their valuation would bear the burden of proving assessments unreasonable, not the utilities paying the tax. 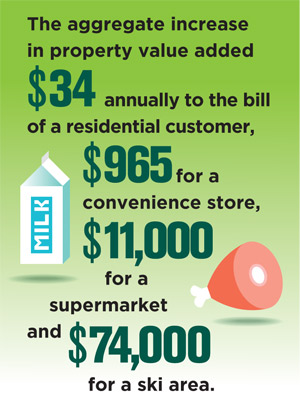 In fact, Johnston explained, utilities would not even be parties to appeals, since the DRA would be the defendant, effectively leaving New Hampshire taxpayers with the cost of the appeal process, which could result in upholding an evaluation to the benefit of the utility and the detriment of the municipality.

Johnston suggested an amendment confirming the authority of municipalities to appraise utility property and prescribing a specific methodology for all municipal appraisals.

Land would be valued as “vacant land,” just as abutting and similar properties in the municipality. For other property, its original cost would be multiplied by a factor drawn from the standard index of public utility construction costs to estimate its reproduction costs then depreciated on a straight-line basis. The utilities questioned the methodology as failing to account for replacing equipment with functionally equivalent but less expensive alternatives.

Moffett, who doubted the panel could reconcile the opposing interests much less design an acceptable appraisal methodology, offered the amendment to establish a study commission charged with recommending a method “to make the state’s system of utility property valuation more consistent across municipalities and yet still reflective of the full and fair market value of utility property in each municipality, to the extent reasonably possible.”

Under the proposal, the commission would have nine members: a representative of the utility companies, the Municipal Association and the DRA, along with a municipal assessor, retired judge or public utilities commissioner, a public member, two representatives and one senator. The commission would report by Sept. 15, 2018. In the meantime, municipalities would be prohibited from changing their method of valuing utility property until April 1, 2021.