With final rules on forgiveness still to emerge, business owners ‘just have to see what happens’ 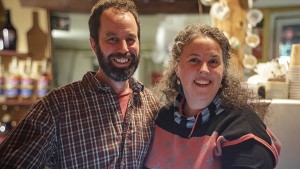 Dave and Melissa Levin, owners of the Mad River Coffee House in Campton, received a loan in May and are in a position to repay it if required to do, so but will submit a forgiveness application.

In May, most businesses that received loans under the federal Paycheck Protection Program were pleased with the cash infusion as they struggled with the loss of revenue from the Covid-19 pandemic, but their gratitude was tempered by the lack of clarity on obtaining loan forgiveness, as was proposed under the CARES Act approved by Congress.

“I think it is fair to say certainty is lacking with respect to how the program is going to conclude,” said Bruce Berke, state director of the National Federation of Independent Business. “I know the money has to be spent in 2020. Hopefully, there will be more structure to the forgiveness process.”

The initial funding approved by Congress stated that forgiveness for a loan required 75% of the money be spent on payroll. The money had to be spent in the eight weeks after it was received and paid back in two years if it was not forgiven.

After an outcry from many businesses, the subsequent Paycheck Protection Program Flexibility Act of June 5 extended the period for using the money to 24 weeks or the end of the year, whichever is sooner, with 60% toward payroll, 40% toward other allowable expenses, such as rent, mortgage and utilities and a repayment period of up to five years for loans awarded after June 5 and two years before June 5. That has given lenders and borrowers more breathing room to prepare documents for forgiveness and for all of the rules to be finalized.

Dave Levin, owner of the Mad River Coffee House in Campton, received a loan in May and at the time expressed concern about the forgiveness process and requirements.

Levin told U.S. Sen. Jeanne Shaheen, D-NH, that without clear guidelines for forgiveness he was reluctant to spend the $82,000 he received.

Four months later, Levin said the money was spent solely on payroll, and he is in a position to repay it 100% if required to do so, but will submit a forgiveness application.

Levin said he only recently received information on the forgiveness process and he has been communicating with his bank.

On the bright side, Levin said the summer season was far better than predicted with a 6% increase in sales in August over last year and likely 15% to 20% higher for September.

“It has been a very busy season in the White Mountains,” he said. “Second homes are full, campgrounds are full and hiking trails have been mobbed up here.”

The U.S. Small Business Administration has not forgiven any loans but has received about 100,000 forgiveness applications, a small percentage of the roughly 5 million loans totaling $525 billion that were approved. Officials have promised to begin processing those applications, according to recent reports.

“The SBA portal for forgiveness is open and is accepting applications,” said Kristy Merrill, president of the New Hampshire Bankers Association.

Merrill said there is legislation now waiting for Congressional approval to “streamline” the forgiveness process for loans of less than $150,000, which she said represent 86% of the loans approved in New Hampshire. But Merrill cautioned that given the political climate in Washington, the legislation may never get approved.

“It is seen as helpful to small businesses and would certainly make things easier to process,” Merrill said.

Some banks are holding off submitting forgiveness requests, hoping the paperwork is simplified through Congressional approval, Merrill said, adding that others are moving ahead because the borrowers don’t want to wait.

Another PPP loan recipient, Kurt Steelman, president of Steelman Production Services in Keene, is in a tougher position than most businesses. Steelman’s company provides labor to the entertainment industry and has worked venues including Fenway Park. He said he was able to keep a small staff on the payroll but lost millions in business and does not see it coming back any time soon.

Most of his workforce is temporary and part-time, hired to work specific shows. As for what lies ahead with his loan and possible forgiveness, Steelman said he has not filed yet for forgiveness and is waiting to see how his business fares in the months ahead.

“I will just have to see what happens,” Steelman said.

Other loan recipients said they have been told by their lender to just wait until all the rules are finalized.

“I received an email from my bank telling me not to apply yet,” said Scott Rice, owner of Woodstock Inn and Brewery. “The rules keep changing.”

Borrowers have 10 months after the covered period of the loan to file for forgiveness.