Company that operates Portsmouth Shipyard complex comes under fire from senators, including Hassan 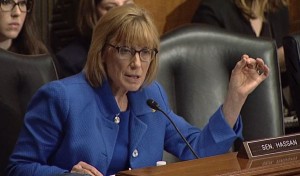 U.S. Sen. Maggie Hassan, D-NH, was among the senators to call into question the performance of Balfour Beatty Communities, which provides housing to tens of thousands of military personnel, including at Portsmouth Naval Shipyard.

The company that provides housing to tens of thousands of military personnel around the country – including to sailors and their families at the Portsmouth Naval Shipyard – was excoriated Tuesday by members of the U.S. Senate Homeland Security and Governmental Affairs Permanent Subcommittee, a panel of which U.S. Sen. Maggie Hassan, D-NH, is a member.

Balfour Beatty Communities LLC, which manages more than 43,000 military homes in 26 states, pleaded guilty last year to falsifying maintenance records and defrauding the government in the wake of a scandal that emerged in 2019 over squalid military family housing.

The company pleaded falsifying housing repair records from 2013 to 2019 in order to receive higher performance awards. The company paid $65 million in fines and restitution.

The company admitted it had doctored data on work orders to make it look as if it promptly took care of repair requests at the military homes while, in reality, problems such as mold and rodents had continued to fester. Top executives were not convicted, though two lower-ranking company officials were, according to Roll Call.

But an eight-month Homeland Security and Government Affairs subcommittee investigation found that barely livable conditions continued despite the earlier plea, and the panel held hearings on Tuesday to hear from military personnel who told stories of shoddy housing, including repairs that were never made and failure to address remediating severe environmental hazards, including the continued prevalence of mold at some of the residences and rodents at others.

A report released Tuesday by the subcommittee found that Balfour Beatty has continued similar and “ongoing mistreatment” of military families.

The panel’s probe covered homes at Fort Gordon, an Army base in Georgia, and Sheppard Air Force Base in Texas.

In his testimony before the committee, Richard Taylor, the company’s president of facility operations, denied that there were substandard conditions throughout the company’s housing network.

“Our performance metrics indicate the overwhelming majority of our residents are happy with their home and the service we provide,” Taylor told the committee.

But, he added, “things go wrong. We don’t always get it right the first time. We’re not perfect. We’ve never testified that we are a perfect organization.”

Committee members appeared unwilling to accept that explanation. As Sen. Jon Ossoff, D-Ga., the panel’s chairman, asked: “Why should a company convicted of major criminal fraud that engaged in a scheme to defraud the United States remain in a position of trust, responsible for the safe housing of heroes, the servicemembers and their families, on installations across the country?”

His feelings were echoed by other members of the panel, including New Hampshire’s Hassan.

“I am deeply concerned by the testimony we have heard today and the impact that similar misconduct may have on my constituents,” Hassan said. “How widespread is the misconduct by Balfour Beatty and other private housing contractors?”

The nation’s military family housing was formerly owned and maintained by the armed forces, but it was privatized in 1996. Today, 14 housing companies have arrangements with local bases. Balfour Beatty is one of the larges of those firms. Among its many complexes is the NSY Portsmouth Homes housing complex in Kittery, Maine.