Use of batteries is spreading slowly in NH, but proponents see ‘exponential growth’ on horizon 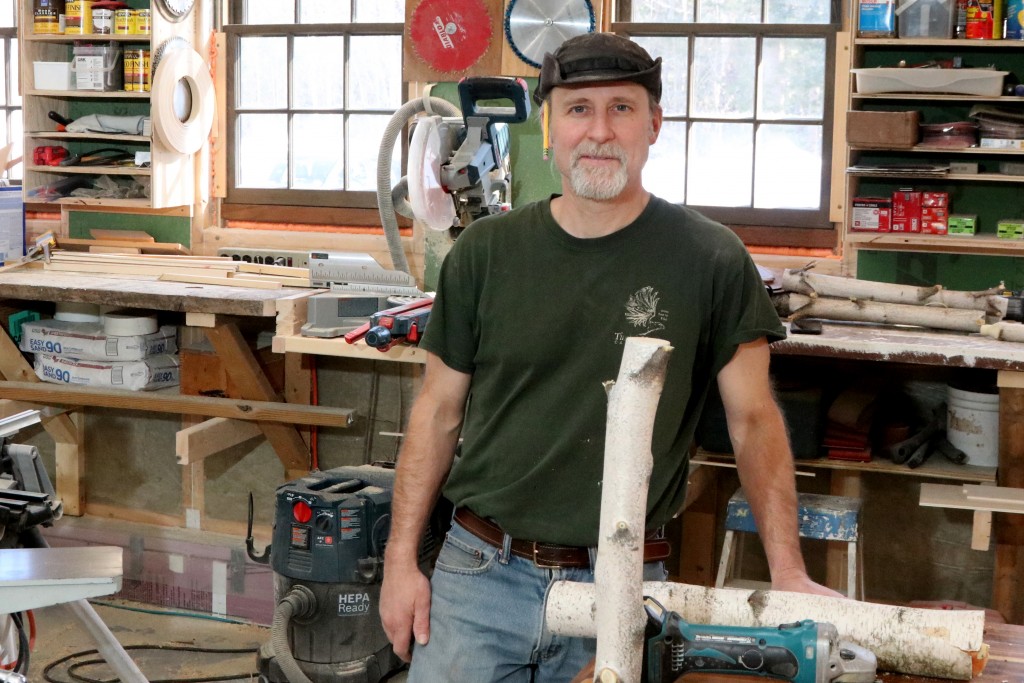 Michael Kender of Belmont inside his woodworking workshop at his home he recently built. Instead of paying to connect to the power grid, Kender installed a rooftop solar system with nine lithium batteries, in hopes it would pay off in the long run. (Photo by Allegra Boverman)

Michael Kender had a choice.

He could power his business and the home he had just built off a dirt road on a 38-acre lot in Belmont by paying $35,000 to get wires installed that would be long enough to connect him to the grid. Or, for $50,000, he could install a rooftop solar system with nine lithium batteries to stay off the grid. He chose the latter, in hopes that it would pay for itself in a dozen years.

“I like the autonomy of it, to be responsible for your own power,” he said.

Kender, whose TimberHawk Carpentry work-shop includes an impressive array of power tools, only had a shot at economic viability because the cost of energy storage has gone down by more than a third in the last five years.

But that may not be enough — yet. The nine SimpliPhi lithium ferro phosphate batteries that Kender bought cost over $31,000, more than his 28 solar panels, and they would be depleted after a couple of cloudy days, forcing him to run a propane backup generator. The first month there was little sun, he spent more on propane than he was paying for electricity at his old location. Still, with the voided cost of that power line, and a still generous federal tax break, it might eventually be worth it.

While living off the grid may not yet be an economical option, battery storage connected to the more modern, economically and environmentally friendly electricity grid of the future might be.

Indeed, energy storage — once mainly considered an alternative to the grid — might actually complement it, making renewable energy more viable for some customers, while actually cutting costs for the rest. Currently, all of New Hampshire’s utilities are experimenting with storage.

“It’s exciting. We are nearly there,” said Madeleine Mineau, executive director of Clean Energy NH. “But it is definitely going so slow.”

Two cases in point: The state’s biggest storage project, Liberty Utilities’ plan to install as many as 800 Tesla batteries in people’s homes, was proposed in December 2017. A single battery has yet to be installed. Regulatory approval of Eversource’s pilot program — which involves a $7 million battery — is just getting underway.

Nationally, energy storage is on the rise. In 2018, there were 777 megawatts of grid-connected storage in the U.S., with an expected 1,681 MW expected in 2019. But that is projected to rise to 4,700 MW in 2024, according to the data from the Energy Storage Association. New Hampshire accounts for about 5 MW, the organization told NH Business Review.

Anecdotally, storage is on the rise in New Hampshire, too: off the grid or grid-connected; front-of-the-meter storage (usually owned by a utility) or behind-the-meter storage, which is usually, but not always, owned by the ratepayer.

There is storage on the cheap: a bunch of lead-acid batteries that you find in a gas-powered vehicle that don’t last very long. There is storage in the middle: a lithium-ion battery found in larger-scale projects with some fire risk. And there is lithium ferro phosphate batteries that are the most expensive, but last longer and with less risk.

The latter were the batteries installed for Kender’s business by NH Solar of New Hampton. SimpliPhi is also the battery of choice of Be Green Solar, a company in the North Country town of Benton, which has sold about 10 to 15 systems.

Banks usually don’t finance properties without an electrical hookup, so these batteries are often installed by well-to-do, fiercely independent individuals “who have an aversion to dealing with the power company,” said John Hassell, Be Green’s president and owner.

But there are others, like Brentwood-based ReVision Energy, which installs mainly Tesla Powerwall lithium batteries in solar-powered homes and businesses with utility hookups. The setup helps lower some of a ratepayer’s demand charges.

But until there is more time-of-day pricing and/or the price of batteries continues to drop, “it’s mainly a peace-of-mind backup,” said Daniel Clapp, general manager and partner of ReVision.

In New Hampshire, the company has sold some 19 batteries averaging about 13.5 kilowatt-hours, at $12,000 a battery. That’s compared to more than 40 batteries in Massachusetts, including those sold to four homes in Fitchburg, Mass., part of a pilot program with Unitil, the New Hampshire-based utility.

But battery sales have been doubling every year, said Clapp.

“We see them as a big market opportunity,” he said.

Unitil’s New Hampshire program, due to start this summer, is small, with five or six participating this summer. Eversource has a similar summer program but is also planning something more ambitious — a package with a front-of-the-meter large battery in Westmoreland, the least reliable area in the region.

The southwestern New Hampshire town’s 570 households, three large businesses and 76 small businesses are served by one 16-mile power line that is not looped and therefore more prone to outages.

Another line would cost $6 million and could also go out in a storm. Instead, Eversource is proposing installing a $7 million, 1.7-MW lithium-ion battery close to the town’s center that will provide backup power for up to four hours, a “non-wire alternative” that would save ratepayers money, nearly $2 million in the long run, the utility said.

In Littleton, there was a proposal by Enel Green Power to build an even larger lithium-ion battery, costing about $30 million to $50 million. An Enel subsidiary would buy power off the grid at low peak, and then be available to sell it back to the utility at high peak, but the company withdrew its application after the town’s concerns over a possible fire risk.

Eversource’s proposal is not just about reliability, and that’s mainly how the other, behind-the-meter, part of the proposal fits in.

Eversource would pay residents and businesses to install their own batteries. It would also promise to “pay for performance” every time it needs to use power from the batteries. It plans to offer a similar deal for Wi-Fi thermostats, allowing the utility to turn down the air conditioner when it needs power over the summer.

This is all part of the transformation to the new modern grid, which is changing the way we think of and compensate utilities.

In 1990, there were 2,000 grid-connected generators in New England. Today there are 125,000, with “exponential growth expected” in a decade, said Charlotte Ancel, Eversource’s director of clean energy strategy, policy and development, in testimony last July before the New Hampshire Public Utilities Commission.

Rather than energy use going up, it has gone down because of such generation as well as energy efficiency, she said. This requires “a reimagining of the electric grid.”

Eversource’s Westmoreland project, she said at the time, “will make a small rural New Hampshire town an object lesson in clean energy transformation.”

But that object lesson won’t take place for a long time, if the experience of Liberty Utilities is any indication. Liberty first came to the PUC in December 2017, proposing an even more ambitious plan involving 1,000 batteries and a large, non-wire alternative in West Lebanon. But it dropped the latter and downsized the former after a number of stakeholders raised objections and the PUC agreed that the $8 million project was “too big, too complex and too expensive.”

There were some key differences between the Liberty and Eversource proposals.

Liberty originally wanted to own all the behind-the-meter batteries, though it would charge a discounted fee for residents to either rent them or pay an up-front fee. And rather than pay residents on performance, Liberty would charge different time-of-day rates, so consumers could use the battery during high peak and discharge at low peak. Residents would also agree to make the batteries available during planned peak times, though they would (in the original proposal) be notified in advance. Any extra power that went to the utility would be reimbursed at the net metering rate.

But stakeholders, such as Clean Energy NH, objected to Liberty owning the batteries, saying that it would stifle competition. After nearly a year, the parties reached a compromise to break up the project into two phases. The utility would install between 100 and 200 of its own batteries for the first phase. Residents would have to pay $2,422 or $25 a month over 15 years. Favorable results (meaning the program would be on track to save about $1.8 million) would allow the installation of up to 500 “bring your own device” batteries with a third-party aggregator to account for the different time-of-day rates.

The system would be cloud-based, raising cybersecurity concerns. Liberty was ordered to come up with a security plan, which took much longer than expected.

On Feb. 13, the PUC recommended that the battery installation deadline be extended to June, pending final signoff on security as well as some other matters. The commission has not yet approved the extension.

Liberty still hasn’t installed its first battery, “but we have more than half of the potential Phase 1 participants signed up and, once we receive the extension, we are ready to have Tesla start installing the batteries,” said Heather Tebbetts, Liberty’s manager of rates and regulatory affairs.

The delays have been frustrating, said NH Clean Energy’s Mineau. “We would really like to see some progress. I understand the PUC is being cautious, but it’s easy to be paranoid. There is only so much harm that can be done, taking control of a battery.”

Meanwhile, in the New Hampshire Legislature, several bills are being sponsored to give the PUC a bit of a push.

In January, the Senate passed a watered-down version of a House bill that would just require that the PUC open a docket on the matter. Sen. Martha Fuller Clark’s bill, similar to that original House bill, would require the PUC to set a compensation system for those that install storage behind the meter.

You’d think a storage bill that requires some outlay by the utilities would face the same kind of utility concerns as in compensating renewable energy — should all ratepayers end up subsidizing storage systems that save some people money? But storage is a little more straightforward than net metering. It enables utilities to get power when they want it, as opposed to having to buy it when it’s available, they say.

“It’s not an apples-to-apples comparison,” said Eversource spokesman William Hinkle. “If used effectively, it can benefit all the ratepayers. We think of storage as an important part of a clean future here in New Hampshire.”