The Covid session: Of nearly 60 coronavirus-related bills filed, about 20 remain 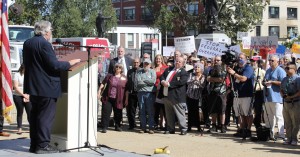 Protesters challenged House Speaker Sherman Packard at a September rally in front of the State House, saying he was doing too little to stop federal vaccine mandates. Packard later sponsored House Bill 1455, which would prohibit the state from enforcing those federal mandates. (Annmarie Timmins-New Hampshire Bulletin)

In its nationwide survey of Covid-19 legislation seeking to limit the authority of public health officials, the Network for Public Health Law put New Hampshire in the top 10 with 16 bills. The real number is closer to 60 – unprecedented or close to it according to state and local organizations.

“In all my years of following the New Hampshire General Court, I cannot recall ever seeing so many bills clustered around a single topic,” said Anna Brown, director of research and analysis for Citizens Count, a nonpartisan nonprofit that seeks to inform New Hampshire voters about issues and candidates. “To put the number of coronavirus-related bills in perspective, consider the other ‘hot’ topics in the Legislature this year: I counted about 30 bills related to election security this year, about two dozen bills related to ‘education freedom accounts,’ and about 20 aimed at housing development.”

Describing the bills as a wide-ranging attack on public health, more than 50 business leaders, healthcare institutions, and advocacy groups announced in January they had formed the 603 Coalition to defeat what they saw as a dangerous threat to public health.

The group has responded to every bill, often with in-person and written testimony. Part of the job has been debunking misinformation.

“I am certainly concerned that people continue to make arguments that are against evidence-based science,” said Steve Ahnen, president of the New Hampshire Hospital Association, a coalition member. “I think we just need to continue to make the case why certain provisions or certain measures are counter to public health, and we’ll continue to do that.”

Their efforts have been matched by RebuildNH, a Covid-19-inspired advocacy group that lists among its goals protecting personal liberty and safeguarding the republic form of government enshrined in the state constitution.

RebuildNH’s social media and email outreach, in addition to its multiple training sessions, has led 200 to 300 followers to contact lawmakers on dozens of bills.

Both sides have had mixed success.

About 20 of the nearly 60 bills introduced in January survived crossover day, meaning they still have a chance at becoming law. (One, House Bill 440, prohibiting the suspension of civil liberties during a state of emergency, was signed by Gov. Chris Sununu Monday.)

The 50-state survey made clear New Hampshire is not unique.

Nationwide, the Network for Public Health Law counted 234 bills restricting vaccine requirements in schools and workplaces; 204 prohibiting the closure of business and limits on visiting loved ones in hospitals or long-term care facilities; 114 taking away the authority of public health officials; 109 tied to emergency orders; and 50 on masking mandates.

Each issue has been the subject of at least one bill in New Hampshire, ranging from efforts to ease access to ivermectin and broaden exemptions to vaccine mandates to outlawing masks at schools and limiting the governor’s authority in future public emergencies.

“Following 9/11, many states passed legislation with respect to public health emergency preparation and authority,” said Donna Levin, national director of the Network for Public Health Law, in an email. “However, at least according to my recollection, the recent legislation related to the limitation of measures taken to protect the public’s health during the Covid-19 pandemic may be unprecedented.”

Rep. Melissa Blasek, a Merrimack Republican and RebuildNH’s executive director, said there’s a reason the fight against pandemic safety measures has continued long after those measures have ended: a perceived ongoing threat to personal freedom.

“We realized how much people’s privacy, how much their choice in medicine, can be stripped away by the government,” she said. “There will be other diseases. There will be other emergencies. These medical freedom bills were filed (because people) realized that government majorly overstepped and intervened in people’s right to choose what happens to their own body.”

Many bills have not only failed but did so quickly, never making it from one chamber to the other.

Those include severance pay and a generous six months of unemployment for workers fired after refusing a vaccine mandate; limits on workplace masking and testing requirements; allowing students to transfer to another school if their school required masks; and requiring a Covid-19 vaccine to attend school.

Also killed were bills allowing minors over 16 to get a vaccine without parental consent and making a positive case of Covid-19 an allowed exemption from a mandate.

Others remain in play – but have been diminished by amendments.

A bill that would have allowed families to opt out of all school vaccines with a vague “conscientious” objection now would simply make it easier for parents to file a religious exemption.

Another bill would have removed the Covid-19 immunization records of as many as 790,000 people immunized during an emergency order that prohibited them from opting out of the registry. The bill now would require the state to widely advertise an option to withdraw.

Another bill sought to require state-run hospitals and county nursing homes to honor a moral objection to vaccine mandates. Public health leaders warned lawmakers that allowing such a broad and vague exemption would render mandates meaningless, and put vulnerable patients and nursing home residents at risk.

That is not the argument that persuaded House members to amend the bill and drop the moral objection exemption, however. They cited the potential loss of $160 million in state funding if the Centers for Medicare and Medicaid Services concluded the exemption violated its rules.

Surviving crossover day is a step toward victory but no guarantee. Because a vast majority of the Covid-19 inspired bills came from House members, it will be the Senate, a very different body, that will largely determine their fate.

“Some of these bills may face an uphill battle in the Senate,” Brown said. “… Very generally speaking, the Senate is more moderate and cautious than the House when it comes to changing state law.”

There are a few big ones to watch.

House Bill 1210 would require colleges, universities and public and private employers that receive money from the federal or state government to honor not just religious and medical objections to a vaccine mandate but also moral objections.

Ahnen worries passage of that bill could cost private hospitals the same loss of funding from the Centers for Medicare and Medicaid Services – and risk the health of patients and staff.

“And it just really puts the state in position to be telling private employers what they should and shouldn’t be doing with respect to trying to ensure the health and safety of their staff, their employees, their customers, and in our case, the patients that we serve,” he said.

It’s not the bill Blasek wanted either. She wanted it to apply to all employers regardless of whether they received public funding.

“It’s not as strong as I would personally prefer, but it’s what we are going to get this year,” she said. “This is where we are. It’s definitely a big step.”

House Bill 1606 sought to make it harder for the state to record a person’s immunization in the state’s new vaccine registry by requiring a person to agree to have their information included rather than ask to be exempted. Only Texas and Montana operate their registries this way.

Public health officials, who say the registry is one of the most important public health tools for tracking a state’s protection against communicable disease, warned changing the registry from opt-out to opt-in would discourage people from participating.

The House amended the bill to require providers to ask a person each time they get a vaccine whether they want their immunization record included in the registry or excluded. Healthcare providers are glad to see opt-out dropped but are worried about the administrative burden the amended version creates.

Blasek calls this compromise a win: This effort failed last year – and she believes the amended version still makes the registry opt-out.

“Essentially a person will never be automatically put into the system,” she said. “That is clear in the bill.”

House Bill 1131 would prohibit mandates in schools. A Senate committee heard from nearly 40 people during a three-hour hearing last week, all but eight of whom supported the bill.

Lawmakers must wrap up their work in about two months. That’s a long way off in Ahnen’s eyes.

“I think we just need to continue to make the case why certain provisions or measures are counter to public health,” he said. “And we just have to continue to share information to make sure lawmakers hear from their local hospitals, doctors, nurses, teachers, advocates, education folks, so that they’re hearing the facts of why it’s important to support public health in their communities. I don’t think we’ve turned that corner on misinformation.”