Teeing up a transformation

For the first time in almost five decades, Manchester Country Club in Bedford is hosting the New Hampshire Open Championship, the most prestigious golf tournament in the state.

While golf takes center stage at the Donald Ross-designed course July 26-28, behind the scenes it’s also a coming-out event for the club, which has undergone extensive course and facility renovations along with a business overhaul that brought the local institution back from the financial brink.

It also undertook a dramatic makeover of its operating philosophy, making the elite private club more accessible to the greater community.

“The changes we have made saved the club,” said Brian Kelley, a PGA professional who was brought in as general manager in 2014.

Like many private clubs founded in the first part of the 20th century, it had been insular, with a men-only approach to golf and running the club.

When Kelley, a graduate of the golf management program at New Mexico State University, arrived at the club, it was dealing with the fallout from a $10 million clubhouse renovation that led to the loss of almost 50 full-equity members.

Kelley, 37, had worked at every level of the golf course management industry (resort, public and semi-private), a career path he chose early on, when he realized his real passion was less in playing or teaching but, in effect, becoming the CEO of multimillion-dollar organizations like MCC.

“Because of the program at school, I learned about every operational aspect of the business and that really interested me,” he said.

Though a transition was already underway at MCC, Kelley was hired to accelerate it and to bring the club into the 21st century. He carefully hired professional staff and set them free to do what they do best. 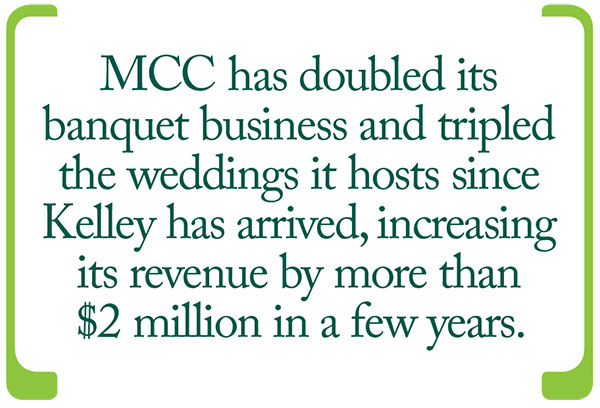 “We had a stigma of not being open to charity tournaments, meetings or even weddings unless you were a member, of being closed to the community at large,” Kelley said. “We’ve been pretty aggressive to make the changes needed.”

While Kelley admits the stigma may not be completely gone, its image has improved significantly along with the MCC’s financial situation.

MCC has 138 employees during its peak period and now hosts 40 weddings a year (it hosted 12 in 2012). On three Mondays a month, the club hosts local tournaments that raise money for local businesses and philanthropic organizations. It has also become a center for business events.

Banquet business has doubled since Kelley arrived, and he said the food and beverage side of the business turns a tidy profit (a rarity at golf clubs of all types). In 2016, MCC generated $7.6 million in revenue, up from $5 million a few years before.

As part of the business focus, Kelley said his staff spends all winter planning and then kicks into operational mode come spring, when the course opens.

What they are seeing on the course is a slow renewal and restoration as much as possible to its 1923 roots.

“It needed a lot of work,” Kelley said of the process scheduled to go through 2023. It will be overseen by MCC’s director of agronomy, who will work from original photos from 1923, and includes the bringing down of some 8,500 trees to allow more sun in and the course to breathe and recover.

“You see it with a lot of old classic courses. They never cut the trees, and that wasn’t good for the health of the fairways and greens who never had a chance to heal from long winters,” he said. “It’s a six-year restoration plan. We know we have a long road to go, but we will do most of the project (the often-expensive consulting design part) in-house to save the club money.”

For rainy days and winter months, the club also installed an interactive indoor golf performance center and golf simulator, and Kelley has emphasized more family- and child-friendly participation at MCC.

Kelley said he convinced the board it was time to host a major tournament like the NH Open, which offers $35,000 in prize money and draws professionals and top amateurs from as many as 13 states.

MCC had hosted the event nine times, but had not done so since 1969.

For the New Hampshire Golf Association, the 2017 open will be special because, for the first time, it garnered significant corporate support.

Xfinity is the main sponsor, while Concord-based Northeast Delta Dental also has pitched in as a supporting sponsor.

“The NH Open is one of the marquee events on the NHGA tournament schedule and has a special place in the history of New Hampshire golf,” said Matt Schmidt, NHGA executive director. “The support of both Xfinity and Northeast Delta Dental is a monumental step to making the open one of the top golf tournaments in New England.”

Northeast Delta Dental, which has contributed $2,500 in prize money for the golfers, is known for its support of a wide range of activities, from minor league baseball to road races throughout the state.

“It’s a great way to promote our messages about the importance of oral health,” said Tom Raffio, president and CEO.

Supporting golf has been part of its marketing strategy for a while, from supporting as many as 60 local charity tournaments in three states (a total of $50,000 annually) to being the main sponsor of a women’s professional tour futures event (the Symetra Tour) at the Beaver Meadow Golf Course in Concord.

Raffio was impressed by how the community supported the event and how the Ladies Professional Golf Association invested money to upgrade the course.

“We were a modest sponsor for several years, then starting in 2011, we literally had to save the tournament. From 2011 to 2014, we invested about $100,000 per year, plus we basically managed the tournament too,” Raffio said. “It was great, but at some point, I had to give up on it because I couldn’t get other corporations to participate in the investment.”

Meanwhile, the revitalization of MCC has led to national recognition.

Kelley was named 2016 General Manager of the Year by Troon, the Arizona-based golf management company, and the club’s golf shop was listed among the Top 10 globally by the Association of Golf Merchandisers in 2016 and 2017. The club also garnered Distinguished Club of the World Award recognition in 2016 from BoardRoom magazine.

Kelley believes hosting the NH Open is a significant step for the next generation at MCC.

“The industry and the game are changing,” Kelley said. “The NH Open will showcase the club to the rest of the state and New England. We will bring many golf professionals to Bedford for this event. Because of the open, we are also getting the message out to local organizations that they can do business with us.”