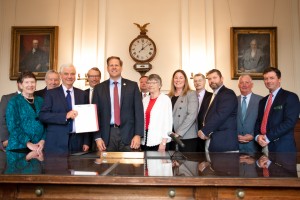 The governor was joined at the Broadband Matching Grant bill signing by elected officials and technology executives. (Courtesy photo0

Gov. Chris Sununu has signed into law a bill establishing a broadband matching grant initiative and fund for New Hampshire that he said could help leverage up to $100 million in federal support to expand high-speed Internet service to all corners of the state.

While that was a major step for New Hampshire, it wasn’t enough – and, in fact, because of a December 2020 CARES Act spending deadline, $37 million in that funding was left on the table.

The grants awarded to broadband expansion projects will be funded with state appropriations, gifts, grants, donations and available federal funds.

Under the legislation, participating communities would cover at least 50% of the cost while the state would provide the rest.

“I expect we could see as much as $100 million in federal assistance to expand broadband over the next few years,” Sununu said. “This gives the state a great opportunity to do all we can to extend service that last mile throughout New Hampshire.”