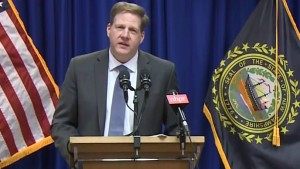 Granite Staters collecting unemployment will have to once again start showing they are actively looking for work starting May 23, Gov. Chris Sununu announced Thursday,

The announcement at his weekly press conference came four days after the Business and Industry Association of New Hampshire sent him a letter urging him to do just that.

“The economy has come roaring back,” said Sununu, adding that there are “tens of thousands of high-=paying jobs” available around the state.

Before the pandemic, the Department of Employment Security required that people getting unemployment benefits also actively actively seek employment, and they had to document that job search by naming the businesses where they submitted applications.

Sununu waived the requirement in March 2020, at the start of the pandemic. Unemployment had climbed to 16% in April 2020.

But in March 2021, the unemployment rate dropped to 3%, and many jobs are going wanting.

He gave the example of a recent virtual job fair on the Seacoast that featured 100 employers were trying to fill 3,000 jobs, but only 140 people applicants took part.

“I don’t know anyone who isn’t looking for workers,” he said.   “Restaurants are gearing up.  Hotels are gearing up, tech companies. Economically, we are really booming,”

Sununu said that Employment Security will be opening up all 12 of its Job Centers to help people get back to work. He also announced three of the department’s upcoming virtual job fairs: one May 6 for veterans; May 11 for students, graduates of adult education programs and the general public, hosted by Pinkerton Academy in Derry and one on May 13, in partnership with the Associated Builders and Contractors.

“We think the governor is doing the right thing,” said David Juvet, senior vice president of the BIA. “It should help employers that are trying to fill open positions.”

Juvet said that “we are hearing from a lot of members, especially manufacturing, that a number of open positions, including entry-level jobs are not being filled,”