Nearly 55,000 jobs are linked to trade with Canada and Mexico 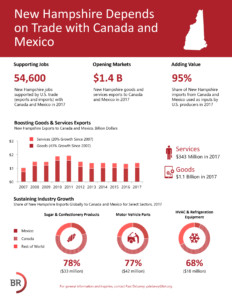 Some 170,400 jobs – nearly one-fifth of the number of jobs in the state – are related to international trade, and 54,600 of them are linked to trade with Canada and Mexico, according to a newly released study.

The study was funded by the Business Roundtable, which is using the data to shore up support of the U.S.-Mexico-Canada Agreement, which was negotiated to replace the NAFTA agreement.

The study – prepared by Trade Partnership Worldwide with the employment data from 2017 – also compared 2017 data to pre-NAFTA data from 1992. The study found that trade-supported jobs in New Hampshire increased by 96 percent from 1992 (when NAFTA was implemented) to 2017 – four times faster than total employment.

According to the study, exports from New Hampshire to Canada and Mexico have increased by 157 percent since the implementation of NAFTA.

Some of the key exports to the two countries are sugar and confectionary products ($33 million), motor vehicle parts ($42 million) and HVAC and refrigeration equipment ($18 million). In fact, 78% of all sugar and confectionary products exported by New Hampshire business, 77% of motor vehicle parts and 68% of HVAC equipment are sent to either Canada or Mexico, according to the study.