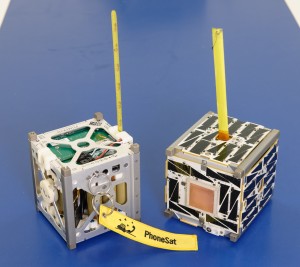 The University of New Hampshire’s Space Science Center has received a $4.6 million NASA grant to fund a project that will offer a college students from across the country hands-on research experience designing and building small satellites that will be launched into outer space and collect data for a space mission.

The Student Collaboration Project, led by Noé Lugaz, a research associate professor of physics, aims to work in conjunction with NASA’s Interstellar Mapping and Acceleration Probe (IMAP) mission and build off of the collected data to provide firsthand research experience for undergraduate and graduate students and help to diversify the field of space science.

“We’re missing out on so much potential with great people out there,” said Lugaz. “Most science projects are publicly funded, and we want to expand access to college students who are qualified and have a passion for science to get involved, no matter what their major. We are hoping to inspire them, even if it’s just for one year. We think we can really start to make a difference.”

Project coordinators will recruit the first group of students from three universities — UNH, Howard University in Washington, D.C., and Sonoma State University in California. During the five-year project, students from each university will design and build a CubeSat — a small satellite the size of a half-gallon of milk — that will have an instrument that can quantify the concentration of oxygen in the Earth’s upper atmosphere and provide scientists with clues about the effects of the solar wind. This is the region where many satellites are located, and knowing more about the atmosphere’s density could help determine their orbit and lifetime, said Lugaz.

“The students from each university have a variety of strengths and experiences that will allow them all to learn from one another,” said Lugaz. “They’re not just doing this on their own, they’ll be collaborating and interacting with each other via online learning tools and technology so they can talk to one another and learn together.”

The student-built CubeSats will launch in 2024 separately from the main IMAP mission but at the same time in order to collect complementary data. The CubeSats will be in space for about four months and will be located much closer to the Earth than the other IMAP instruments.

Besides Lugaz, other UNH scientists involved include Marc Lessard, professor of physics, and Jason Legere, research engineer, who will provide mentoring, and Sonya Smith, a UNH project manager.