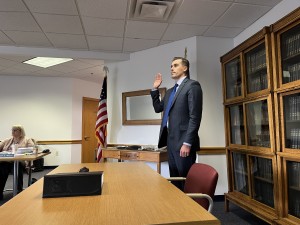 Former State Trooper Haden Wilber is sworn in before testifying June 8 before the state Personnel Appeals Board. (Photo by Paul Cuno-Booth)

Lawyers for the state are appealing a ruling that ordered NH State Police to release records about a former state trooper fired for misconduct, in a case that could have larger implications for police transparency in the state.

In a notice of appeal dated June 10, the Department of Justice indicated it will ask the NH Supreme Court to hold that police personnel records are categorically exempt from public-records requests.

The appeal comes two years after a pair of landmark rulings opened some of those records up to public scrutiny for the first time in decades.

The current dispute concerns records related to former Trooper Haden Wilber, who was fired last August after an internal investigation into a 2017 vehicle-stop case found he illegally searched a driver’s phone, charged her without the proper legal basis and made various other missteps. State Police officials also concluded he lied during the internal investigation, which Wilber denies.

The ACLU of New Hampshire is seeking records about that investigation and any other instances in which Wilber was disciplined, saying they could shed more light on Wilber’s misconduct and the agency’s oversight of him.

Lawyers for the state have fought to withhold those records, arguing that state law makes police personnel files confidential in nearly all circumstances.

Merrimack County Superior Court Judge John C. Kissinger ruled for the ACLU in an order last month, which the state is now appealing.

The NH Department of Safety, which includes State Police, declined to comment, referring the Granite State News Collaborative to the Department of Justice.

Michael Garrity, a spokesperson for the Department of Justice, said the state was appealing the “narrow issue” of whether a certain statute about police personnel records “provides an exemption from the State’s Right to Know law, which is supported in the statutory language.”

Gilles Bissonnette, ACLU-NH’s legal director, said the state’s position would be a step backward for transparency.

“We are two years removed from the murder of George Floyd where our government officials in New Hampshire pledged to take meaningful steps to improve transparency,” he said in a statement. “This appeal decision sets us back. While the State Police did the right thing in terminating this trooper, this position of secrecy only shows that we have a long way to go.”

Public employee personnel records were largely exempt from disclosure under New Hampshire’s Right-to-Know Law until 2020. In a pair of cases that spring, the NH Supreme Court held that personnel records are subject to disclosure when they concern a matter of public interest that outweighs any privacy concerns.

In the Wilber case, the state has argued that that test shouldn’t apply to police officers, citing a different statute that it says grants police personnel files near-total confidentiality.

Kissinger rejected that argument in his order last month.

“This court finds that the legislature did not intend such a sweeping foreclosure of public access to records documenting the serious alleged misconduct of a police officer such as in this case,” the judge wrote.

Wilber was a member of State Police’s Mobile Enforcement Team, a drug-interdiction unit that the ACLU has criticized for its use of minor motor-vehicle infractions as pretexts to question drivers.

In February 2017, during one such stop on Interstate 95 in Portsmouth, he arrested a driver from Maine, Robyn White, after finding a small amount of heroin in her vehicle. Wilber filed an additional charge alleging, without direct evidence, that White had smuggled contraband into the jail inside her person.

No drugs were found in the 13 days White spent in custody or an invasive body-cavity search she was subjected to before her release. All charges were eventually dropped.

State Police launched an internal investigation after White sued in 2019, alleging Wilber violated her civil rights. During the agency’s probe, Wilber admitted to reading a text on White’s phone without a search warrant, a clear constitutional violation, and said he had done similar “cursory” phone searches on other occasions.

Wilber is challenging his termination before the NH Personnel Appeals Board.