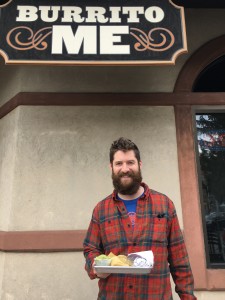 Reuben Bassett, outside his Burrito Me restaurant in downtown Laconia, feels efforts increase the hourly minimum wage to $15 could reduce employment opportunities. (Photo by Rick Green)

There has been strong tourist trade in the 1,600-person White Mountains town, home of Loon Mountain Resort and not far from Cannon Mountain, Waterville Valley Resort and other attractions. Lincoln has approved plans for four new hotels and building permits for 20 new houses.

The only potential bump in the road, as Burbank sees it, is a shortage of workers to wait tables, tend bar and clean rooms. He wonders whether federal supplemental unemployment benefits dissuade people from joining the workforce.

“I have a nephew who just this weekend was at my house eating and he was quite out front,” Burbank said. “He’s 20 years old and he said, ‘There’s no reason to struggle to get back to work because I’m making more money on unemployment.’”

The Covid-19 relief bill recently signed into law by President Biden, extends a $300 weekly jobless aid supplement through Sept. 6. That is in addition to New Hampshire state unemployment, which can be as high as $427 per week. Add in allowable part-time work, and some people on unemployment could take in as much as $800 per week before taxes. A person earning the current minimum wage would make $290 a week before taxes.

Meanwhile, demand for employees is high. Ahead of the busy summer season, the state unemployment rate stands at 3.6%, up just one percentage point compared to a year ago and well below the current 6.2% national figure.

At the Burrito Me restaurant in Laconia, owner Reuben Bassett made layoffs early in the pandemic.

“Nobody knew what was going on,” he said. “We said, ‘Listen if you’re not comfortable, we understand that.’ We laid them off so they could claim unemployment and then we gave them a deadline to come back.”

Two employees chose not to come back, citing conditions like asthma, that make them high-risk for Covid-19, Bassett said.

“So they’ve been getting paid unemployment this whole time,” he said.

While some in the business community talk about unemployment compensation acting as a disincentive for full-time work, Richard Lavers, deputy commissioner of New Hampshire Employment Security, said this was more of a factor early in the pandemic.

“This was a major concern that we heard a lot of initially, when the federal enhancement was $600,” he said. “Add that to the weekly benefit amount and in many cases they were receiving more money while collecting unemployment than they were when they were working. Now at $300, that’s less of a concern.”

“I assume other people make decisions the way I do. If they are able to return to work, somebody is going to do that as soon as they can,” he said. “We know the longer someone remains out of the workforce, the greater the negative impact on long-term earning potential and career opportunities. As soon as someone can return to work, I like to think they do return because of the associated benefits.”

Lavers said the number of people filing new unemployment claims has decreased, as has the number of continuing claims. In January, 735,790 people were employed in the state. That was an increase of 1,620 from the previous month, but down 17,870 from a year ago.

While the stimulus bill kept the supplemental jobless aid at the current level, a provision to increase the federal minimum wage to $15 per hour was removed. Only eight Democratic senators — including New Hampshire’s Jeanne Shaheen and Maggie Hassan — voted with the Republicans to remove that provision.

Shaheen and Hassan said they favor a minimum wage increase, but urged that this be done in separate legislation.

“People who work 40 hours a week should be able to get by and shouldn’t be living at or below the poverty level,” Hassan said in a statement. “I’ve long supported raising the minimum wage to $12 an hour and I’m open to $15 an hour. We need a path forward that is appropriate for workers and small businesses — including restaurants that have been particularly hard hit — and I will work with my colleagues on standalone legislation to do this.”

Shaheen said some businesses, including nursing homes, have trouble employing people because of low wages.

“Let’s work with some of those industries that are going to be most affected so we can see how we can help them make those increases in a way that gets the employees that they need and makes sure those businesses don’t go under,” she said in an interview with WMUR.

There is opposition in the business community to a $15 minimum wage.

Mike Somers, president and CDO of the New Hampshire Lodging and Restaurant Association, said relatively few workers in the state are earning the minimum in any case.

The law allows some tipped employees to be paid less than the minimum wage, but people in this category, such as waiters and bartenders, often end up well compensated, Somers said.

Bassett said he has to pay more than minimum wage to attract and retain employees at Burrito Me.

“I have yet to see from an economic standpoint where raising the minimum wage benefits those it is intended to benefit,” he said.

He said that the business expense of a higher minimum wage could force companies to cut positions and that the current minimum helps first-time and low-skill workers gain experience before moving to better compensation.

Brunette once managed his father’s restaurant, The Schooner, which later became C J Avery’s. He called most of the arguments against a higher minimum wage “scare tactics.”

Brunette said he always has paid employees, including those at his law office, “a living wage.”

“A living wage is a basic human right, and the government needs to ensure that,” he said.

Payroll is a significant expense for owners of small businesses, but they also have significant profit opportunities, Brunette said.

He added that many businesses could cover higher wages with a small reduction in profit margin – a reduction that could be offset with cost savings elsewhere.

“Even $15 is nowhere near a living wage,” Brunette said. “What is an average rental for a two-bedroom apartment? It’s about $1,500 a month.”