Snowmobiles are the next pandemic toy 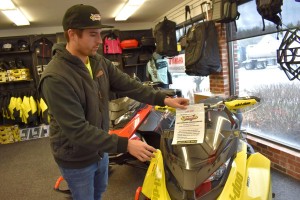 Jake daSilva tapes a “Last One” sign on one of the few remaining snowmobiles at daSilva Motorsports in Moultonborough. He expects to be sold out by the end of November. (Photo by Adam Drapcho/The Laconia Daily Sun)

In the spring it was bicycles. In the summer it was pools and every type of watercraft. In the winter of the year of Covid-19, the must-have item is proving to be snowmobiles.

As with the other products that proved to be pandemic popular, the spike in demand for snow machines seems to be driven by the realities of life during the time of coronavirus and social distancing. Namely, families might not be able to do what they usually do for vacation or weekend fun, yet they still have the budget for some type of experience, so they put that money toward something they can do safely while still making some good memories in a difficult time. More often than not, that means outdoor recreation.

“Overall, it’s been great,” said Lisa Whalley, general manager of HK Powersports in Laconia. She said that 2020 has been a blockbuster year for her business in every season, whether customers are looking for dirt bikes, ATVs or watercraft. “Sales have been up because everyone can enjoy the outdoors with their families,” she said.

That wave is going to carry through to snowmobile season, Whalley said. She won’t have to wait for the snow to arrive, because customers are already coming in to her showroom ready to buy.

Whalley said some of the snow machines have been purchased by experienced riders who are upgrading, but that doesn’t account for a lot of the increase in demand.

“The biggest growth have been people that have never done this before and they’re looking for something to do.”

Whalley said 2020 is shaping up to be “one of the best years that we’ve ever had,” though it isn’t without its headaches.

There were supply chain issues, especially early in the year. Now, customers are buying product faster than she can get them off the truck.

“We are selling things before they arrive more than ever. Eighty percent of what we sell, people are leaving a deposit on something that hasn’t arrived yet,” Whalley said. That has led to the challenge of tracking delivery schedules to keep the owner of that machine apprised of when they should expect to take delivery.

Jake daSilva, sales manager at daSilva Motorsports in Moultonborough, said this would be a banner year for his business, if only he could get his hands on enough snowmobiles.

“It’s very difficult to get inventory this year,” daSilva said. His suppliers are cutting his orders, which means he won’t be able to take advantage of the demand for new machines. “Overall, our numbers will actually be down,” he said.

He won’t even be able to make up the difference with used products, daSilva said, because the market for snowmobiles is so hot that buyers who are upgrading are choosing to sell their old sled themselves rather than trade it in.

“We’re down to less than 10 snowmobiles for the rest of the season,” daSilva said, noting that he usually has that many left over once spring arrives. “We’re going to be out of inventory really soon and we can’t replenish that inventory.”

The sudden interest in the sport has been noticed at the New Hampshire Snowmobile Association, said Dan Gould, executive director.

“We are seeing a lot of people calling the office, coming in to the office, who are buying snowmobiles for the first time,” Gould said. “We are also seeing people coming back to snowmobiling after not doing it for 10 years.”

Gould said he saw the influx begin once Labor Day weekend was over. He’s heard that clubs have also seen a surge in memberships.

“It’s a very positive thing for the sport. As far as having new riders, it’s important that they’re educated,” Gould said. There is a risk with having so many new riders out on snowmobile trails. In New Hampshire, the overwhelming majority of the 7,000 miles of trails are on privately owned land. A network of snowmobile clubs keeps those trails open using volunteer labor, and keeping good relations with landowners is key to the success of the trail system.

Gould is urging seasoned club members to mentor new riders and instill the proper trail etiquette – which might be different from what those new riders were expecting based on the marketing materials that sold them on their new ride.

“A key part of etiquette is staying on the trail,” Gould said. “It’s unfortunate that there’s a style of riding that’s driven by advertising.”

Often, the images or videos used to sell a new snowmobile show how the machine can power through feet of ungroomed powder, taking the rider anywhere he or she points the skis. That kind of riding makes for compelling advertising, but can lead to closed trails.

“That is illegal. You need to stay on the trail. The majority of trail closures is because of illegal off-trail use,” Gould said. With proper guidance, those new riders could represent a new generation of support for a sport that is already popular in northern New England.

Now, as Whalley said, all that’s needed is for Mother Nature to cooperate. Those who bought a boat this summer were rewarded with long stretches of favorable boating weather – will new snowmobilers be as lucky?

“I hope that we get a lot of snow and people can get out and enjoy,” Whalley said. “Research your local trails, always stay on the trails, respect landowners and be safe.”

here’s a good chance that snowmobiling will become a new favorite adventure for many people even after the pandemic, daSilva said. “I think it could really make people see how much fun you can have on your school vacation with your kids, snowmobiling and exploring northern New Hampshire. There’s a lot that we have to offer that many people don’t see.”

“Next summer is already looking bright for watercraft. If that’s a tale of anything to come, I think it will open people’s eyes.”