Sig Sauer gets state funds to expand in Rochester 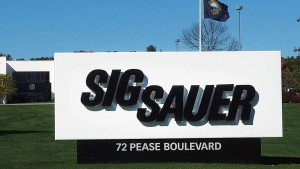 Despite concerns raised by human rights advocates, the state Executive Council approved a package of funding for firearms manufacturer Sig Sauer to expand in Rochester.

It approved allowing the Business Finance Authority to provide $21 million in financing and an unconditional state guarantee of up to $19 million for Sig Sauer.

The firearms manufacturer previously announced plans to relocate its Dover operation to a multi-building, 210,000-square-foot campus in Rochester’s Crossroads Industrial Park on Route 125.

Sig Sauer just announced it received a $77 million Army contract for weapons. The manufacturer has properties across southeastern New Hampshire, including at Pease International Tradeport, and plans to add about 500 employees within three to five years.

Longtime activist Arnie Alpert was concerned about the deal and the impact of gun violence. Alpert said the state should not be in the position of subsidizing such an operation whose products take lives across the world.

However, Rochester Mayor Caroline McCarley said it is “clearly an amazing economic opportunity for us,” particularly for giving youth in the community an opportunity for a career.

The council voted 4-0 to approve the financing package, with Executive Councilor Debora Pignatelli not present.