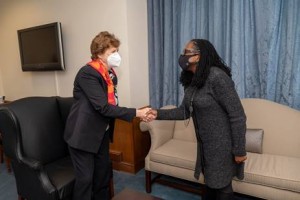 Both of New Hampshire’s U.S. senators say they will vote to confirm Judge Ketanji Brown Jackson to the Supreme Court.

U.S. Sens. Jeanne Shaheen and Maggie Hassan have separately announced their support for President Biden’s nominee, who will be the first Black woman on the court if confirmed.

Shaheen called the judge “eminently qualified” to serve on the nation’s highest court.

“I can only imagine the joy and triumph that Black women and girls will feel to see themselves represented on the highest court in the land for the first time in our nation’s 245-year history,” Shaheen said in a statement.

“Our government should reflect the population it serves and Judge Jackson’s confirmation to the U.S. Supreme Court is a critical step forward to uphold that standard,” she added.

Hassan said she is impressed with Jackson’s record and career, including serving on the U.S. Court of Appeals for the District of Columbia.

“An independent judiciary is one of the hallmarks of a strong and vibrant democracy, and I am confident in Judge Jackson’s commitment to upholding our Constitution and the freedoms of Americans,” Hassan said in her statement.

Also announcing her support for Jackson this week was Republican U.S. Sen. Susan Collins of Maine, which apparently assures that Judge Jackson will be confirmed when the full Senate votes

on her nomination. Senate Judiciary Committee Chair Dick Durbin, an Illinois Democrat, has said he hopes that final confirmation vote will be held April 8, right before the Senate takes its spring recess.