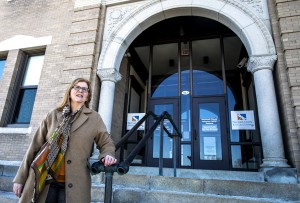 She argued police had racially profiled her client, a Black woman, when they trailed her on the highway, apparently looking for a reason to pull her over. Eventually they did, after the troopers noticed the woman’s front light was out, a minor motor vehicle violation.

The prosecutor waved Brown’s concerns away.

“‘Racial profiling might be an issue in other places, like in big cities like New York or Baltimore, but it’s not a problem in New Hampshire,’” she recalls the prosecutor saying to her.

That was 1998, and Brown said she still hears the same line today.

“It’s been very constant for the last 30 years: ‘We’re different here, we don’t have these problems,’” she said.

Brown’s pursuit of an even playing field in the criminal justice continues today. She is one of two lawyers representing Antwan Stroud, an 18-year-old Black man, who was sentenced to 30 days in jail and two years’ probation in connection with unrest during a protest against police brutality in Manchester last June. On Feb. 24, Stroud, filed to withdraw his guilty plea after his lawyers discovered two white adults who protested with him received lighter sentences, with no jail time or probation.

Even though advocates of police reform have been sounding alarms about racial bias for decades, New Hampshire’s criminal justice system has stayed mostly unconvinced, Brown said.

Part of the issue is a lack of data. At the moment, New Hampshire doesn’t collect much information on its police or how officers interact with the public. With little more than individual court cases and anecdotal evidence, it’s hard to convince people that discrimination is a widespread problem, Brown said.

The data that does exists points to inequities in arrests and the ensuing court-imposed penalties. State arrest data and incarceration rates show Black and Hispanic people face disparity from the criminal justice system. On average, each group is arrested and incarcerated at higher rates than their relative populations.

What remains unclear is if Black and Hispanic people are stopped more frequently by police and if those groups face more severe penalties in court compared to similar crimes committed by white individuals.

A push for better data

The widespread use of traffic stops, coupled with relative discretion given to officers over whom to pull over and how to enforce the law, has stirred discussion over whether they provide points of access for racial profiling and other discriminatory policing practices.

At least 31 states gather race data for traffic stops, though with widely varying methods on exactly what information they collect and what they do with it, a 2016 report from the Marshall Project found.

Within New Hampshire, reporting on police interactions is inconsistent at best. While each police department keeps at least some record of stops, tickets and arrests, they differ on how much information they gather and how it is stored.

Research has already identified trends in traffic stop data across states. In 2020, Stanford’s Open Policing Project published a study drawing on data from 21 state police agencies, including New Hampshire’s, and 35 municipal departments. It concluded that police traffic stops and searches across the U.S. suffer from persistent racial bias, most of all against Black and Hispanic drivers.

What things look like on the ground in New Hampshire continues to be the subject of dispute, however.

Advocates often point to court cases and anecdotal evidence to call out discriminatory policing practices, but without much hard data to go off of, their arguments are more easily brushed off.

The State Police’s Mobile Enforcement Team, for example, has been accused of using “pretextual” stops in its effort to snuff out highway drug trafficking. In pretextual stops, officers pull drivers over for minor traffic violations so they can investigate them for other, more serious offenses.

Typically, drivers are then grilled about where they’re going and why, and their vehicle is thoroughly searched, Brown said. The stops have been widely condemned as a sort of Trojan horse for racial profiling.

“Most defense lawyers would agree that there appears to be a disproportionate amount of stopping based on the color of your skin,” Brown said.

Brown has a record of over 20 court cases where New Hampshire police appear to use pretextual stops, most by state troopers. In one of the cases, State v. Brian Perez, the judge concluded the Mobile Enforcement Team specifically asks its officers to conduct such stops.

But the head of the State Police disputes that stops based on race are happening. The use of pretextual stops is banned in its Fair and Impartial Policing policy, and Noyes told the LEACT commission that officers are instructed not to conduct them.

In March of 2020, ACLU-NH filed a right-to-know request for records on the Mobile Enforcement Team, in part to see if the unit authorizes use of pretextual stops. Until that information emerges, the issue appears to be at a stalemate.

How the data could help

Gov. Chris Sununu created the LEACT commission in June of 2020 to take inventory of the state’s law enforcement practices and recommend improvements in a range of areas. The commission was part of New Hampshire’s response to widespread protests against police brutality and systemic racism following the deaths of George Floyd and other Black lives lost at the hands of law enforcement.

A few of the commission’s recommendations are included in Senate Bill 96, including the call to collect race and gender data for arrests, stops and citations.

Proponents of the recommendation are hopeful it will make the fight against biased policing more data-driven.

A slew of other measures intended to combat racial bias introduced by the commission are already in the implementation stage, like additional requirements for background checks and officer training.

But as these changes are implemented, law enforcement will need to find an impartial way to evaluate how well they are working, said James McKim, president of the Manchester NAACP. This is where the traffic data comes in.

First, he expects the data will help law enforcement keep their commitment to implicit bias and diversity training.

“The demographic data is what supports the need for training,” said McKim, who served on the LEACT commission. “If people don’t think there are people of color being discriminated against, they’re not going to think they need to get training on it.”

Further down the line, it could give police pointers on where other reforms are needed.

Because the race data would be made widely available, it would keep police accountable to the public, he added.

If, as expected, the data indicates officers are disproportionately targeting people of color, it could also serve a greater purpose in educating the general public about police discrimination. This is especially important to help keep people of color safe, McKim said.

“People of color need to be prepared for the fact that law enforcement officers sometimes are either intentionally or unintentionally discriminatory,” he said.

There’s also the question of whether law enforcement agencies will be adequately prepared to fairly analyze and present the data. Data is vulnerable to racial bias, too, so the state should consider training departments on how to analyze it, McKim said.

“We know from what’s going on with artificial intelligence and data analytics in the private sector, there have absolutely been reports of the analysis being biased,” he said.

Provisions contained in Senate Bill 96 would require law enforcement agencies to gather and analyze race, ethnicity and gender data for all subject and motor vehicle stops, citations and arrests.

The bill tasks law enforcement agencies with the bulk of the work — they’d have to collect and categorize it, then conduct some basic analysis. Departments would then submit the data and analysis to the Police Standards and Training Council , which would publish it “in a manner accessible to the public.” Police have cited to lawmakers the potential cost, time involved, and uncertainty of how the program would work as reasons data collection could be unworkable.

Ellen Cohn, program coordinator of Justice Studies for the University of New Hampshire, said to paint a reliable picture of policing across the state, law enforcement agencies would have to make sure they collect the same kind of information in the same way, she said. This is necessary to avoid an apples-and-oranges situation where data from different departments cannot be compared.

Cohn pointed to recent efforts by the Office of Drug Offender Program to gather data on the state’s drug courts. The office uses a database to help track participant outcomes as they progressed through the program.

“I think that’s kind of a model for what we would hope that local police departments would do, would standardize it so that at the state level, that data would be reported,” Cohn said.

A door to other reforms

Should the data requirement pass into law, it could provide a blueprint for similar data collection efforts.

If LEACT is any indication, there’s a growing interest in amassing information on other areas of policing. Some of the testimony submitted to the commission included calls for law enforcement agencies to gather data on use-of-force incidents, as well as police interactions with people with mental illnesses.

Brown said she’s not optimistic the traffic stop and citation data would sway the state on bigger topics like pretextual stops, however. States that began collecting stop data long ago, like Massachusetts, didn’t see sweeping, structural-level changes to their police follow, she noted.

“There’s little victories that you see,” she said.