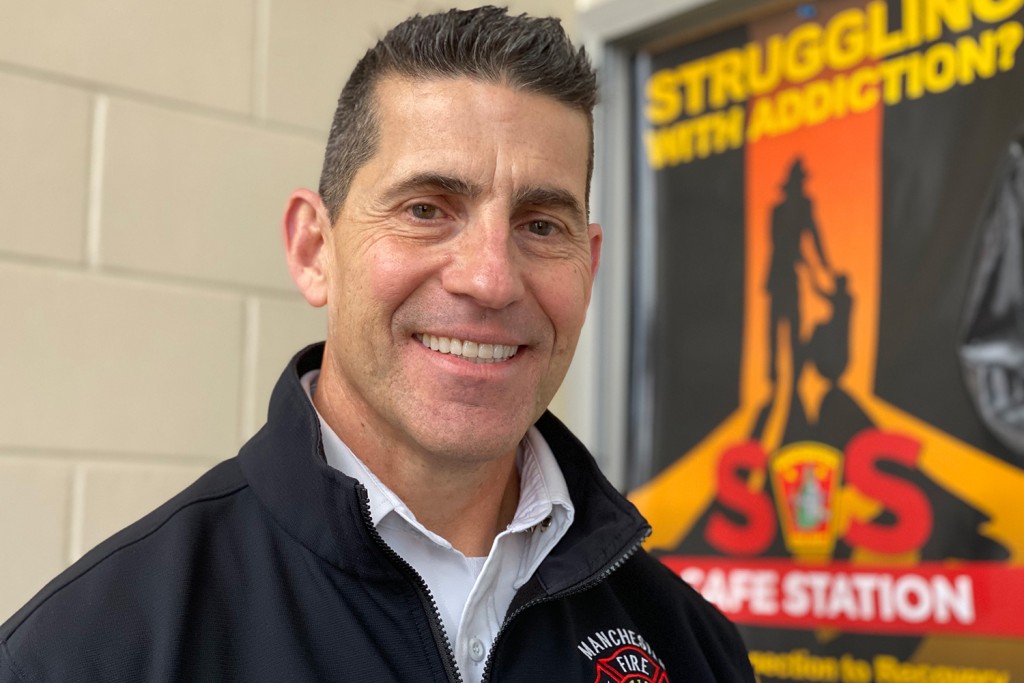 Manchester Fire Chief Dan Goonan is proposing expansion of Safe Station to include a ‘fly car’ or mobile unit to do more outreach. (Photo by Pat Grossmith)

Manchester Fire Chief Daniel Goonan is working on a plan to expand Safe Station services to the addicted in anticipation of receiving $225,000 in state funds in each of the next two years. The Safe Station program didn’t receive any of the $60-plus million the state received in federal funding to battle the opiate epidemic even though it’s an idea that is still going across the country,” said Goonan.

In March 2018, President Trump visited the Manchester Fire Department and praised Safe Station, saying the entire country was talking about how it was saving lives. Safe Stations recently opened in Tacoma, Wash., Chattanooga, Tenn., Ohio, Virginia and Maryland. Yet, New Hampshire, where Safe Station began, has not expanded statewide.

The state opted to put in The Doorways, nine regional centers across the state, where people seeking help for addiction can go, be assessed and referred to needed services.

However, smaller fire departments around New Hampshire, inspired by Safe Station’s mission but with fewer resources, have found ways to allow local first responders to act as bridges for those in need to treatment. The Concord Fire Department has tapped into federal dollars through Project FIRST (First Responders Initiating Recovery, Support and Treatment). Other communities, like Auburn, Berlin, Dover, Keene, Laconia and Portsmouth, are also using existing emergency response systems to connect people to recovery services.

“The relationship between the local Doorways’ director and the Manchester Fire Department has always been good, and I continue to work with them to improve the system,” Goonan said. “The real disconnect is the lack of transparency — information-sharing competition and politics from state powers that be. We have been pushing for fewer hubs statewide, 24-hour coverage in all Doorways coupled with a Safe Station access point in the remaining hubs. We need respite associated with all Doorways because we are losing people in the system, waiting the few days for placement.”

Manchester pitched statewide Safe Stations, but Governor Sununu opted for the Doorways, which qualified for federal funding. However, Nashua and Manchester’s Safe Stations are expecting to share a total of $750,000 in state funds, with Manchester receiving $450,000.

Benjamin Vihstadt, the governor’s communications director, said the funding comes from the state’s general fund, the result of the bipartisan compromise budget Sununu signed into law last fall. The cities have yet to receive the funds, however, because the state Department of Health and Human Services is working with Manchester and Nashua officials to understand the needs of the community to determine and develop the scope of the contract, he said. After that, it will go before the governor and Executive Council for approval. 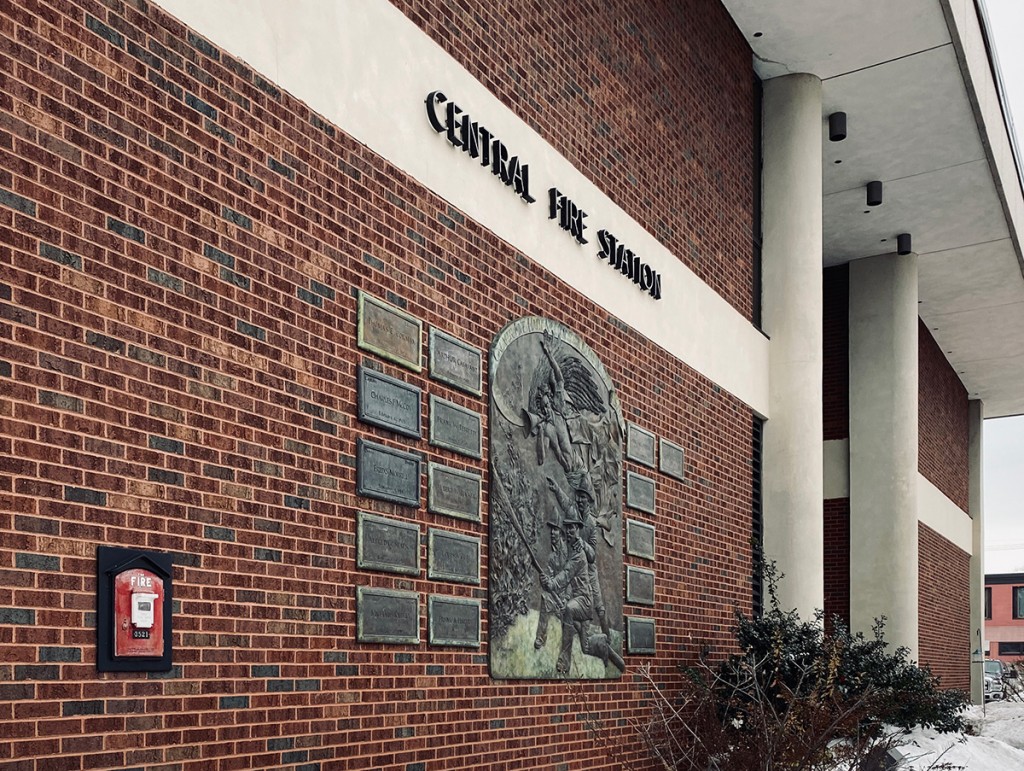 “Safe Stations are an important part of the solution, which is why the budget I signed earlier this fall provided an additional $750,000 for Safe Stations in Nashua and Manchester, which will help individuals get the services they need,” the governor said.

There were growing pains after the Doorways opened last year across the state.

Because they were new, people continued to go to Manchester’s Safe Station, where they knew they could get help. That led to the city being swamped with people seeking help for their addictions. City officials complained more money was needed and that other communities needed to step up and do their part.

Safe Station began in May 2016 to address the opioid epidemic in the city. Anyone seeking help for addiction can go to any fire station in the city. Once there, an individual’s condition is assessed, and he or she is linked up to needed services. The fire stations provide a stigma-free environment, Goonan said.

“The fire department just made sense,” he said. “We’ve been here 180 years and it’s where people come when they need help.” We know where the gaps are. Hopefully, the governor can allow a Doorways 2.”

A resurgence in meth use

Across the state, substance abuse treatment providers are grateful for federal money the state received to address the opioid crisis, but they have made it clear it’s not the only issue they are treating.

Within the past year, New Hampshire received more than $64 million in State Opioid Response grants, which are limited to treating opioid-related substance use disorders. But that may be changing thanks to the introduction of the Turn the Tide Act, introduced by U.S. Senator Jeanne Shaheen, D-NH.

On Dec. 16, Shaheen announced that government funding legislation for fiscal year 2020 will include a provision that allows flexibility for treatment providers to be able to use opioid response grant dollars to help patients suffering from methamphetamine and cocaine dependency, in addition to opioid use disorder.

The announcement is timely as treatment providers say crystal meth misuse is on the rise.

“Even in the last six months, it’s been horrible,” said Carrie LaFlamme, admissions director at the Bethlehem-based Friendship House, which is part of the North Country Health Consortium.

Shaheen, a senior member of the Senate Appropriations Committee, was involved in the efforts to release the federal opioid response funding in 2018. The Turn the Tide Act originated from her discussions with New Hampshire treatment providers, according to her office.

“The substance use disorder epidemic we’re facing today isn’t the same one we were fighting a few years ago, so as this crisis evolves so should our response,” said Shaheen. “By empowering treatment providers with the ability to use these federal grants for a broader range of substance misuse, we can help ensure more Granite Staters get the help they desperately need.

Those using meth may develop meth-induced psychosis, which may put the person and others at risk of harm, according to Dr. Seddon Savage of the Dartmouth-Hitchcock Substance Use & Mental Health Initiative and chair of the Opioid Task Force of the Governor’s Commission on Alcohol and Other Drugs

“It’s not like opioids at all, especially because of meth psychosis,” said LaFlamme. “People (with meth addiction) can be beyond our level of care.”

Sara Lutat is executive director of Dismas Home of NH in Manchester, which serves women who have been in a substance-use disorder program while incarcerated and need additional treatment upon release. She said heroin and fentanyl have become too expensive so people are turning to meth, and many women use meth because it’s cheaper.

Also worrisome to treatment providers is the belief that meth is safer than opioids.

“It’s a misconception,” Lutat said. “People think you can’t die from it, but you can.”

According to Shaheen’s office, the bill also funds the State Opioid Response grants at $1.5 billion for the year and maintains the 15% set-aside for hardest-hit states like New Hampshire. Additionally, the state is slated to receive up to $1.7 million through the Support for Patients and Communities, which provides housing assistance for those struggling with substance use disorders.

There is also funding in the bill for Child Abuse and Prevention Treatment Act programs, which is needed in New Hampshire since it faces a backlog of cases partially due to the impact of the opioid epidemic on families, according to the announcement.

Goonan has drafted a plan for a downtown “fly car” to roll out during peak times, which is noon to 8 p.m. He says it will be staffed by two firefighters, one an advanced EMT. That will result in a quicker response and provide a bigger presence in the inner city, where most of the overdose calls take place, and hopefully save lives.

The state money promised to the program “gives us the opportunity to step up our game and provide better Safe Stations,” he said. “Instead of waiting for them to come, maybe we can do some outreach to the homeless.”

Since Safe Station began operation, 6,422 people have sought help, an average of about five a day, according to statistics compiled on Nov. 22 by Chris Stawasz, regional director of New Hampshire and Maine for the AMR ambulance service. If they are in need of medical attention, they are taken to a city hospital. If they need a detox program, they are taken to The Doorway at Granite Pathways.

Goonan says if they arrive at the station after Granite Pathways closes at 11 p.m., they are taken to the Farnum Center, also in Manchester.

With winter here, the “fatality prevention team” — consisting of the city’s fire, police and health departments, Families in Transition, outreach workers, the Neighborhood Enforcement Team and the Greater Manchester Mental Health Center — currently is trying to identify the homeless and locate homeless encampments to reach out to that community. They hope to earn their trust and ultimately convince them to literally come in from the cold. Ideally, Goonan said, he would like to have a GPS locator in areas where the homeless are sheltering to ensure workers can reach them “in the dead of winter” to bring them indoors.

“We’re hoping for the best and preparing for the worst,” he says. “We have all really come together. We’re trying to put together the best response for the city. We’re keeping all our options open.”

Goonan said it is not just the drug epidemic that emergency personnel are dealing with, but the high number of homeless suffering from addiction and/or mental illness. Emergency personnel also are seeing an increase in methamphetamine use on the streets with individuals mixing it with fentanyl or other opiates. He said no longer are individuals using only fentanyl; more and more they are using multiple drugs and/or alcohol.

The biggest problem is that too often there is no bed available. The Farnum Center, Goonan said, has 16 beds. The New Horizons shelter has 24-12 each for men and women who are sober. Most nights, the shelter is filled to the limit. Goonan said he is talking with people who operate sober houses to see if they would take in those individuals when beds aren’t available. He said this has been an ongoing problem for years.

“That’s always been the hole,” he said.

Sometimes individuals end up being housed at local hotels. Safe Station operates as an access point, not a service provider, according to Lauren Smith, policy and strategic outreach director for Mayor Joyce Craig.

The hotel stay is capped at two or three days, he said, and is designed to be used only until a shelter bed opens. Still, each year every penny budgeted is spent. He agreed with Goonan that more beds are needed, not just in the city but statewide.

Charlene Michaud, Manchester’s welfare director, said her department is the last resort. It provides individuals with financial help for basic needs expenses when an individual and/or family does not have the ability to pay for it.

“There is an eligibility process, and no one is eligible simply because they are seeking substance use treatment,” she said. “As part of the eligibility process all other possible resources, including tapping into programs utilizing state or federal funds, are explored.”

Editor’s note: This is the second of two parts in The Granite State News Collaborative’s Granite Solutions project investigating the dual challenge of New Hampshire’s opioid crisis and its relationship to treatment of mental health issues.