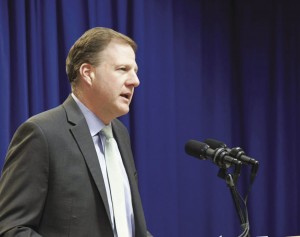 More than 5,500 rural homes, businesses and public buildings will have access to fiber internet service by the end of the year, thanks to $16 million in federal funding through the CARES Act.

Gov. Chris Sununu announced the outcome of the application process for Connecting New Hampshire Emergency Broadband Expansion Program at a press conference on Thursday afternoon. He only publicly disclosed some of the locations that would be receiving money, with $6.5 million allocated to projects in the towns of Bristol, Danbury, Deering, Errol, Hillsborough, Mason, Springfield, Stoddard and Washington, connecting 3,189 various homes and other properties.

In the coming weeks, the governor said he expected he could disclose more details about the remaining $9.6 million that would build out fiber to over another 2,400 rural properties. The municipalities and vendors were still finalizing their own contracts before the state could execute the grant agreement, he said.

“The state really doesn’t control that contracting process – it’s between the vendor and the localities, but we hear they’re pretty close,” the governor said.

Time is of the essence as the funds come with stipulations that projects must be completed by Dec. 15, a mind-boggling quick deadline for telecom infrastructure. The federal funds were distributed to states to provide equitable internet access during a time of increased  demand for high speed internet as residents working  and attend school remotely, due to the pandemic.

Earlier this week, members of New Hampshire’s congressional delegation sent a letter xto the leaders of the U.S. House and Senate urging them to address extending that deadline to spend the money.

“We put an initial $50 million into the fund because it was completely unknown what the application process would yield,” said Sununu. “To get the $16 million and to get these projects done in the next few months is just phenomenal – the fact over 5,500 properties are going to have access, I think that comes out to an average cost of just under $3,000 per hookup – that’s a great price. We’re able to do it quickly, we’re able to do it cost effectively and we’re able to have a pretty high impact to folks across the area.”

In addition to improving internet speeds and reliability, the fiber buildout “is definitely a property value enhancer for all of these individuals,” said Sununu.

Reliability is essential, said Heather Peterson, Peterborough managing broker at Four Seasons Sotheby’s International Realty, who is seeing homes in the surrounding towns of Peterborough as well as the Lake Sunapee region selling within days.

“A lot of them are second homes, and some people are going to telecommute.”

While the towns of Dublin and Rindge have partnered with Consolidated Communications to bond for the buildout of fiber, Peterson says upgrading internet infrastructure is more difficult in larger towns of 6,000 people like Peterborough and Jaffrey, where “the densely populated areas have cable but half the town does not, so it’s harder to have a town meeting and get bonding passed because half of the town are happy and half the town are miserable.”

A meeting held by the Monadnock Broadband Group, an informal coalition of municipal officials and other stakeholders in Cheshire County, criticized the guidelines for the Connecting New Hampshire Emergency Broadband Expansion Program. Not only did the group cite the extremely fast turnaround, but also that only 10% of the funding will be distributed up front, making it risky for companies without existing infrastructure, and because it excludes preexisting agreements like those in Dublin and Rindge.

“I think we could have done a lot more with this money, but we just didn’t have the time, that was one of the biggest drawbacks is the time constraints the federal government put on these dollars,” said Sununu. “I think we’re one of the few states doing it. I think everyone’s trying, but just to be able to get the $16 million out and over 5,000 hooked up, it’s a win and we’ll keep pushing it.”