Roll up for the History Tour

Sign artists to converge on Keene for public art fest 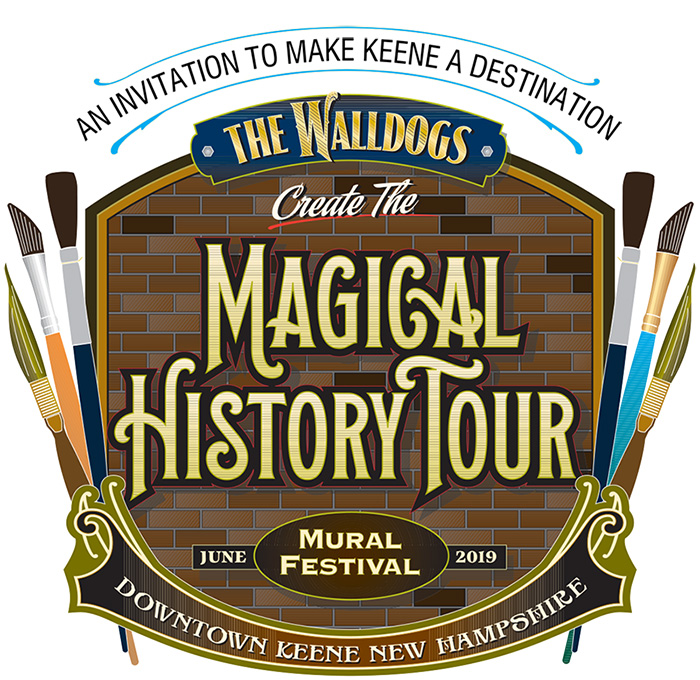 Keene is preparing for an invasion in June. The invaders are a traveling band of world-class sign artists known as “Walldogs” who annually converge on a city or town for a festival and create lasting works of public art. From June 20 to June 23, they plan to visually transform the downtown Keene area with 16 historically related murals on the sides of brick buildings.

The project is called the “Magical History Tour,” and it has been more than three years in the planning. Keene Signworx owner Peter Poanessa is leading the Keene Walldogs effort and he says the organization will eventually raise the more than $250,000 needed to fund it. The cast will include 250 artists and hundreds of local volunteers.

The city of Keene, individual donors and hundreds of local businesses — the underwriters and supporters represent many of the region’s most-respected companies and organizations — have offered strong financial and logistical support, so much so that Poanessa said it “has been overwhelming at times.”

Poanessa said the Walldogs are an international group of highly skilled sign painters and mural artists dedicated to keeping the tradition of brush-to-brick sign artistry alive. He has taken part in two Walldogs events, in Rhode Island and Illinois, since 2015 and thought the history of Keene and the city’s overall community spirit would make it a perfect venue.

“Walldog festivals are often community-changing events,” he said. “It sounds hard to imagine a community changing overnight but, when the dust settles from this, people will have a renewed sense of pride in their town and each other. That is the real magic.”

“I have not heard one negative thing about the festival and people are pretty excited about it,” said Phil Suter, president of the Greater Keene Chamber of Commerce.

The chamber has helped with publicity efforts and Suter said many in the region believe it “will transform the visual experience of the city and help it become even more of a destination location.”

“The support for community in our town is the stuff of legend; it’s almost inexplicable to an outsider,” said Judy Rogers, Magical History Tour community coordinator and the owner of Prime Roast Coffee on Main Street. “People here get involved, so convincing folks to take part in a project with multi-faceted, far-reaching opportunities that will reverberate for years with positive effect took no convincing at all.”

Keene will host the 29th Walldog Festival in the United States since the concept was unveiled in Atherton, Iowa, in 1993.

Illinois-based sign painter Jay Allen, one of the original Walldogs (the organization is decentralized and leaderless by choice), has seen the Walldogs message spread to more than 800 murals and 14 countries around the world from Europe to Australia and New Zealand.

“Often times, towns forget how to work with one another,” Allen explained. “They get caught up in politics, religion or old generation versus new generation. Our goal is to help them remember what made them a community in the first place: the common bonds or combined purpose. We are able to do this by reintroducing them to their own history.”

“As part of environmental and social aspect of our business, we see this fitting in with our effort to make this community great,” he said. “I just think this will benefit the whole community from the historical perspectives of the city to having a walking tour.”

After a Keene community-involved vote in 2018 to determine the mural subjects, 16 were chosen. Pablo Fleishmann, the co-owner of Green Energy Solutions, was an enthusiastic backer from the beginning, and his Roxbury Street building will host the Ashuelot River mural. Additionally, his company has donated funds and helped to organize the music festival aspect of the event.

Poanessa said the Magical History Tour murals are all original designs and in the style of vintage building advertising signage. They will be painted with mural-specific acrylic paints designed to last decades. The mural themes include historically significant and interesting people, local businesses, diversity, inclusion, industry, innovations and natural splendor.

“It’s a really big deal — one of the biggest public art projects that I know of,” said Jessica Gelter, the executive director of Arts Alive!, the leading arts organization in the Monadnock Region. “The community has done so much to engage and prepare for artists from all over the world who will add more beauty to an already-popular downtown area — and give it an even greater sense of place, story and identity.”

When Poanessa was gauging community support for the project in 2016, he wasn’t sure how it would be received in some important corridors. “The biggest surprise has been the almost unanimous support of the city,” he said. “We expected some opposition and got just a little from the historic preservationists, but in the end, they agreed to change the codes in the historic district to allow the painting on these brick buildings — and became cheerleaders for the project.”

Keene City Manager Elizabeth Dragon said the city recognizes the importance of the arts to the cultural and economic health of the region. She is also pleased that city hall will soon be home to the Wyman Tavern/Minutemen Gathering mural.

“Keene has a very active arts community and this project is perfect for us,” Dragon explained. “Not only will it bring thousands of visitors during the event, these works of art will bring spectators for many years to come. The murals are expected to last for up to 50 years and will be within walking distance of each other.”

‘Invested in the outcome’

The Magical History Tour will offer more than three days of live mural paintings, music, food and other related events. “We are busy preparing for the artists and visitors,” she said. “Staff is working diligently with the volunteers from the Magical History Tour to handle the logistics. An event of this magnitude will require some partial street closures and parking accommodations. We will do our best to make the event a success for our visitors, residents and local businesses.”

The Magical History Tour organization has grown to include more than 30 community volunteers involved in marketing, fundraising, community historians, community events and engagements, and committees for food and housing for visiting artists (Keene State College has donated a dorm). Organizers believe the event and its aftermath will be an economic driver by attracting people to Keene to enjoy a year-round, town-wide living gallery — and also assist in making the area a more appealing destination for new businesses and economic development. Arts Alive! is playing a critical support role by bringing the Magical History Tour under its nonprofit status umbrella and handling all the financial aspects of the event. 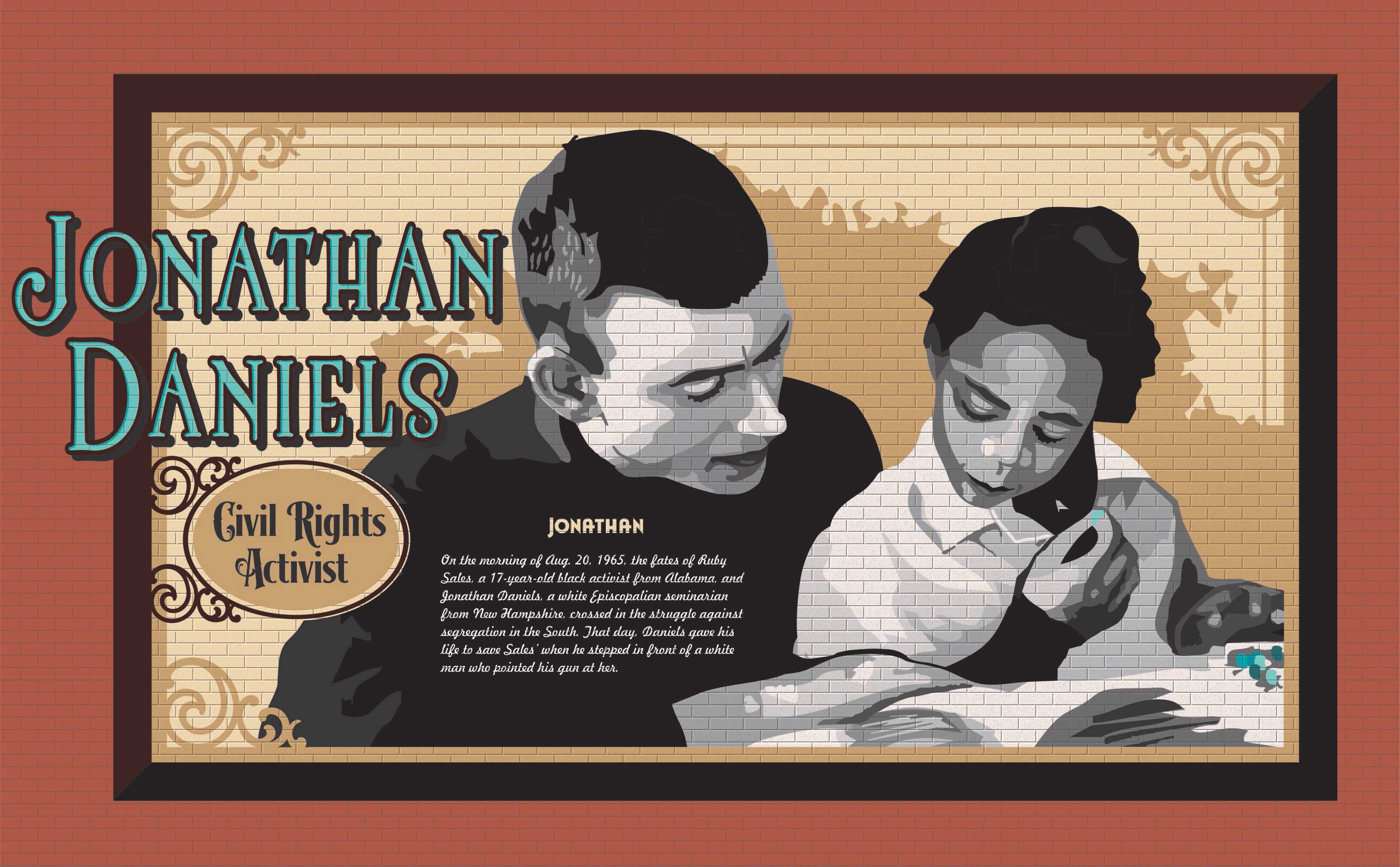 “The people around here are very excited about what’s coming. They’ve been a part of the process and are invested in the outcome. Knowing all that is in the works and having seen the mural designs, I feel that the final result will surpass even the greatest expectations,” Judy Rogers said. “From moment one, I was captured by the potential of the Magical History Tour. It’s a public art project, a festival, an economic opportunity, there is a pride of place element,

tourism and branding opportunity for the city, region and state. My excitement hasn’t subsided. I rarely stop thinking about how all the pieces fit together to make the most of this opportunity.”

The historically significant people and themes that will be the subjects of the Magical History Tour mural festival are:

• Jennie B. Powers, founding member of the Cheshire County Humane Society in 1875

• Barry Faulkner, early 20th century artist and muralist, considered to be one of the founders of camouflage

• The Abenaki, the Native Americans who inhabited the Keene region

• The Wyman Tavern/Minutemen Gathering before the 1775 Battle of Lexington