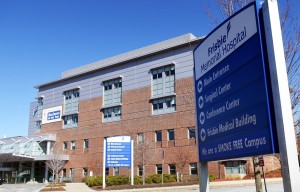 The family of a deaf patient is suing Frisbee Memorial Hospital in Rochester for not providing her with a sign language interpreter and for relying on her 11-year-old daughter and 14-year-old son to translate their dying mother’s wishes – despite an earlier settlement with the U.S. attorney that it would provide sign language services.

The suit is the latest complaint filed by Kirk Simoneau, an Amherst attorney, alleging violations of the Americans with Disabilities Act. Simoneau has filed similar litigation against Southern New Hampshire Medical Center in Nashua and Monadnock Community Hospital in Peterborough, both of which had also reached earlier agreements with the federal government, and both of which had settled the latest litigation.

“There are additional suits in the pipeline,” said Simoneau.

While the suits all seek financial compensation, “the goal in these suits is to improve the way they do things, especially to improve the training.” He particularly lauded Monadnock for its training efforts since its settlement at the end of last year.

The Frisbee suit, which was filed July 20 in Concord, concerns events surrounding the treatment of Glenys Emerson-Crane, who was suffering and would eventually die of liver failure. She was admitted the hospital on July 20, 2019, according to the complaint, and was oozing blood from her eyes and mouth when she was admitted. Although hospital records indicated she and her husband Christopher Emerson were both deaf, and that an EMT advised it of the need for an interpreter, and the family asked for one, the hospital did not try to get a live interpreter until 38 minutes after the patient’s arrival or even use a Virtual Relay Interpreting Service (VRI), says the complaint. Instead, hospital staff allegedly relied on the couple’s hearing children, 11-year-old Gabriella Crane-Emerson and 14-year-old Christopher B. Crane Emerson, says the complaint.

The hospital did try to make calls for a half-hour, but made no further attempt says the complaint.

But when Emerson made a request on his Facebook page, it generated an immediate response and interpreter finally arrived about two hours after admission, the complaint says. Before leaving the hospital that night, he told the hospital that an interpreter would be needed that day, but when none was provided he again turned to Facebook, and the interpreter who responded wasn’t able to get there until noon, according to the filing.

Later that day, Glenys was transferred to Dartmouth-Hitchcock Medical Center, which did provide interpretation, but she was later transferred to Massachusetts General, where her condition worsened, and then back to Frisbie on Aug. 26, so she could be provide with hospice care near her family.

Prompted by Emerson, the hospital did spend 10 minutes trying to get a live interpreter. While hospital records said that it provided “deaf talk” with the patient’s consent, Emerson refused to sign the consent form, says the complaint. The complaint then details alleged problems with the service, including an occasional frozen screen and the need to “kneel down” to use the machine.

The complaint also alleges that the Emersons’ problems did not end there. In May 2020, Gabriella had to go to the emergency room. Her father requested the VRI but staff at first had no idea what it was, and on March 22 of this year, Gabriella returned to the emergency room. The VRI system wasn’t working and nurses said they didn’t know how to get it to work. Nurses kept talking to Gabriella, said the complaint, leaving her father in the dark about her condition.

In 2010, the U.S. Department of justice determined that in 2005 Frisbie violated the rights of two other patients, one deaf and the other hard of hearing, and entered into a settlement. The hospital agreed to appoint at least two program administrators to “provide appropriate assistant on auxiliary aids and services” and “to provide qualified sign language interpreters to patients and companions.”

Frisbie officials did not respond to requests to comment.