21% of pavements rated in in poor condition, study finds

Over one-fifth of New Hampshire’s rural roads are in poor condition – one of the highest percentages in the nation, according to a report by the national transportation research group TRIP. 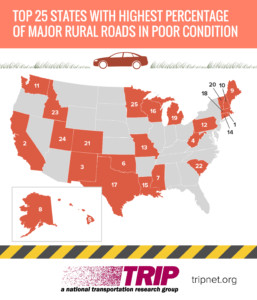 21% of New Hampshire’s rural pavements are in poor condition – the 10th worst percentage in the country. the report also found that 18% of the state’s rural roads are in mediocre condition, 11% are in fair condition and 50% are good condition.

In addition, according to the report, 9% of the state’s rural bridges are in poor condition or structurally deficient, meaning there is significant deterioration to the major components of the bridge. Some 41% are rated in fair condition and 50% are in good condition.

In addition, the TRIP report finds that traffic crashes and fatalities on rural non-Interstate roads are disproportionately high, occurring at a rate nearly 2½ times higher than on all other roads.

In this case, New Hampshire is far below the national average, with a traffic fatality rate of 1.09 deaths on rural roads and 0.59 deaths on all other roads.