State, localities grapple with growth of Airbnb in New Hampshire

For Kenan Bajramovic, a Manchester plumber, Airbnb is a way to fill his snowbird father’s West Side studio apartment during the winter.

For Anne Jacobsen, serving her daughter’s homemade muffins in her Laconia home to short-term guests from around the globe is more lucrative and pleasant than being a landlord.

For Sandy Bouzianis, it’s a way to pay the mortgage at her ski resort condominium in Bartlett.

“Why not make some money if it’s just sitting there?” said Bouzianis, a retired flight attendant from Massachusetts. “CEOs have housing all over the world and do this. Why can’t we?”

Bouzianis, Jacobsen and Bajramovic aren’t alone. There are currently 876 Airbnb listings in New Hampshire, according to Airdna, a site that keeps track of active Airbnb rentals.

For instance, just weeks before Valentine’s Day, there were still 300 New Hampshire openings for the weekend, from a four-bedroom house with a jetted hot tub in Lebanon for $950 to a camping site near Dartmouth for $30. Lincoln has the most rentals, with an average price of $295 a night. In Manchester, an apartment goes for an average of $99.

Globally, Airbnb boasts 2 million monthly listings in 190 countries. The Wall Street Journal learned that the private company – which did not respond to a NH Business Review inquiry – is expected to reach $900 million in annual revenue and has a valuation of $24 billion.

There are other short-term rental companies online, such as Vacation Rentals by Owner (VRBO), FlipKey and HomeAway, but Airbnb, if not the largest, is the fastest-growing. And it has become an icon of the sharing economy, disrupting the traditional lodging industry and befuddling local and state lawmakers who are starting to grapple with how to both regulate and tax the new phenomenon.

Such short-term rentals are becoming more and more ubiquitous. A quarter of travelers reported using short-term rentals platforms in 2015, almost four times more than the previous year, according to a survey by the Travel Technology Association. And half of the hosts surveyed said they do not plan to continue to do so in the next two years, indicating that this is just something people dabble at.

One Airbnb study of New York City listings emphasizes that 95 percent of home hosts share only one listing a year and that a typical listing earns $5,100 a year and is shared less than four nights a week, the very kind of peer-to-peer economy that no one wants to overregulate. 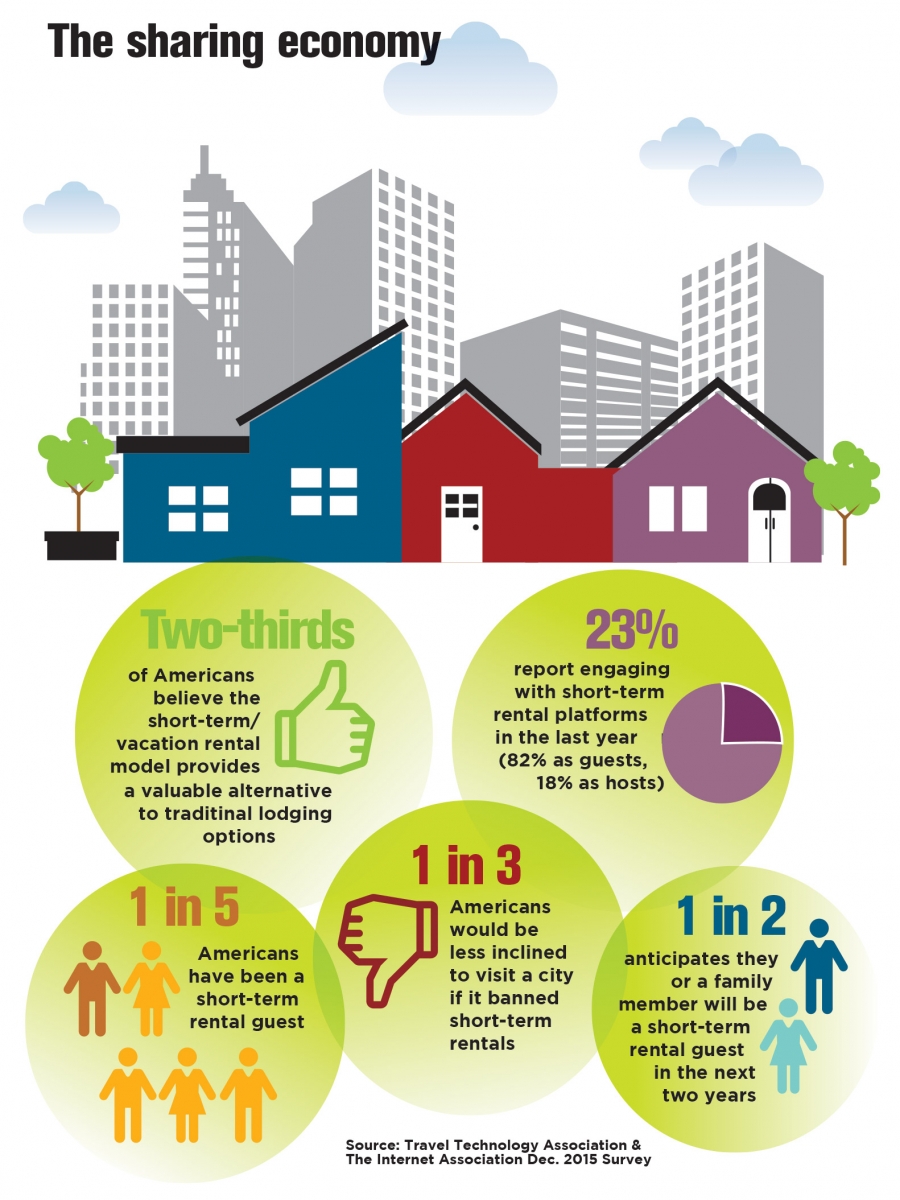 But, as a recent study financed by the lodging industry points out, a large and growing portion of the rentals – and thereby the revenue that hotels and inns are potentially losing – is generated by full-time operators who rent multiple units.

The study, released in January, performed by Penn State’s School of Hospitality Management and funded by the American Hotel and Lodging Association, uses Airdna data in a dozen large cities. It shows that those with multiple listings account for 40 percent of revenues. Some 30 percent is derived from full-time hosts (though those two groups overlap).

According to the study, the growth in revenue among those renting three units or more rose 87.3 percent in a year, compared to an overall growth rate of 59.2 percent.

How relevant this urban data is to New Hampshire is anybody’s guess. But the local hospitality industry doesn’t need hard numbers to know that something major is going on.

“Essentially, a lot are running unlicensed hotels,” said Mike Somers, president of the NH Lodging and Restaurant Association, of the Penn State study. “Has it reached that level in New Hampshire? I suspect not, but to what degree is it happening?”

The NH Department of Revenue Administration would like to know, since even occasional operators are required under New Hampshire law to pay rooms and meals tax. A DRA audit, targeting the short-term rental industry a few years back, yielded about $1.5 million in rooms and meals taxes, late fees and penalties from some 550 operators. The industry has only grown since.

The agency won’t comment on whether it is planning to conduct another targeted audit in the near future, but lawmakers are working on two tools that would make its life easier.

Butler, co-owner of the Notchland Inn, said he has no problem with the short-term rental industry. Indeed, he knows some innkeepers who use platforms like Airbnb to fill their own establishment, just as they might use Travelocity.

“We just want the state to develop who they are, so they will be on a level playing field,” he said.

Butler’s original bill would have required Airbnb to provide a list of operators who would have to register as a business with the Secretary of State’s office. But this idea quickly ran into resistance in the House Commerce Committee and from the NH Association of Realtors, whose members often manage short-term rentals on behalf of their clients. It was the NHAR that suggested the rooms and meals ID number posting as a compromise.

“It is a concern of our members that everybody pay their taxes as well,” said Bob Quinn, the association’s lobbyist.

The House committee signed off on the compromise, but, at deadline, the whole House had yet to pass it.

Realtors oppose HB 1689, another tax-related bill that would require real estate agents with multiple properties to itemize their consolidated rooms and meals tax returns. That imposes unnecessary paperwork, said Quinn. “Why go after those who are paying taxes?”

DRA Commissioner John Beardmore explained that identifying which properties are paying taxes would save work, leaving more resources to go after those that don’t.

Airbnb, which collects the revenue and then passes it on to hosts, keeps track of rental income, so Sandy Bouzianis said she just hands over information to her accountant.

That’s better then some other online lodging rental services, she said, where the payment is made between customer and operator. Some of the people in her condo development in Bartlett are renting out their place full-time, she said, “like it’s a job.” Bouzianis said she rents out her condo about a week per month, enough to pay the mortgage. “But some of my friends get cash, and who knows what they pay?” she said.

Bajramovic started renting out his Manchester apartment in June. He wasn’t sure if he had to pay the rooms and meals tax, but he had no trouble doing so. “I want to do the right thing,” he said. “If hotel people do it, why not we?”

Indeed, he said, his father’s apartment “is like a hotel. We provide fresh towels. My wife and daughter clean.”

That’s what Anne Jacobsen discovered from renting out two units in an old three-story house a few blocks from Lake Winnisquam. Guests there are treated to baked goods prepared by her daughter, who has a day job as a professional chef, can take a spin in the kayak, or hang out around the fire pit in the backyard, all for about $70 a night.

Jacobsen used to have two apartment houses, but she got rid of them, because she makes more money through Airbnb.

Long-term rentals average $25 a night “and half the time they don’t pay, they are in transition. They can’t get it together, they stick it to you and leave,” said Jacobsen. Now we hardly have a problem and we have people from all over the world – France, Austria, Netherlands. It’s amazing.”

“There has been an explosion of short-term rentals,” said Fuller Clark. “In many instances, you have speculators coming in and actually buying long-term rental properties and turning them into short-term rentals because they can make more money.”

Portsmouth was starting to issue cease-and-desist orders to some short-term rental operators, alleging that they were operating a commercial business in residential neighborhoods. According to Jane Ferrini, assistant city attorney, Portsmouth drafted a zoning ordinance that would restrict short-term rentals to certain areas of the city and included certain regulations, such as requiring liability insurance, provisions for off-street parking and limiting room occupancy.

The ordinance was tabled in September, partly because it was unclear whether the city had the power to do that. Instead, they went to Clark.

“I don’t think we want to ban these,” Clark testified. “That would inhibit a product that is very popular. Licensing is a much better approach,” she said.

She posited a bachelor’s party: “They get drunk and make noise and throw trash around and the neighbors are very upset. You want to be able to withdraw the license where there has been abuse.”

But municipalities already have the power to clamp down on wild parties, pointed out Jim Lyons, a Conway real estate agent who testified on behalf of the Realtors Association. They just have to go to court and get a warrant. SB 482 would allow inspections without any warrant, invading the privacy of both the operator and renter.

“Does the state want to force itself on homeowners to inspect their property, their plumbing, their electrical, their heating?” he asked. “Could they inspect the fridge for proper temperature?”

The extent of the inspections under the bill would be up to the municipalities, but Ferrini said that it includes safety standards.

“Currently, the fire department doesn’t inspect private homes, but you are opening yourself up to different scrutiny once you have people stay in your home. They are different from residents, who are familiar with building entrances and exits,” said the attorney.

The Senate Public and Municipal Affairs Committee gave Fuller Clark’s bill a cool reception. “Having those people swept up into a whole new licensing program seems to me rather onerous, said Sen. David Boutin, R-Hooksett, the committee’s vice chair.

“Why not the let a person earn an income?” agreed Bouzianis.

Bouzianis agreed that some short-term renters could cause trouble. She called the police herself on another short-term rental downstairs from her own place. But that could happen anywhere and the idea that she would have to pay a licensing fee “is more money out of my pocket. I don’t like that.”

“If a party causes the next-door neighbor to complain to me … they [Airbnb] could do that once. I give them a bad rating and they will never be able to rent from anybody again,” he said.