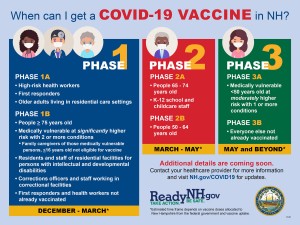 New Hampshire health officials have announced more details about the next stage of the state’s vaccine plan, which they say will begin in mid- or late-January. But many are awaiting further information that they hope will clarify the available guidance.

Doctors like Douglas Phelan, a family medicine doctor with Elliot Family Medicine in Bedford, say they’ve been overwhelmed with phone calls from patients who want to know when they can get the vaccine. Phelan said his practice still doesn’t have much information to offer, though officials say physicians will be some of the people administering vaccines in the coming weeks.

“We feel the anxiety from patients as they ask us in the office and on the phone when they can get their shot,” he said.

Part of the challenge has been communication between the state and the public, said Stephanie Patrick of the Disability Rights Center of New Hampshire. She said people with disabilities and their caregivers still don’t know when it might be their turn.

“There continues to be a lot of uncertainty,” Patrick said. “And people with disabilities, like the general public, I don’t think are sure where to go to get the answers if the public information provided by the state is not helping to answer their questions.”

Officials have said they’re working on a public information campaign and will focus on reaching disadvantaged groups. The New Hampshire Medical Society is also working with the state, local partners and community leaders to improve communication with the public about where they may fit into the vaccine timeline.

Jake Leon, communications director of the New Hampshire Department of Health and Human Services, said there will be more materials on vaccines soon.

“When the time comes, people will know how to get vaccinated,” he said.

The next phase, 1B, targets all people 75 and older, correctional facility staff, residents and staff of residential facilities for people with disabilities, and health workers and first responders who haven’t been already vaccinated.

Also included in phase 1B are people with two or more medical conditions, determined by the state health department, that put them at significantly higher risk for getting Covid-19. The phase will continue until March, and those eligible will be able to get shots from their doctor, a local pharmacy or one of the state’s 13 fixed vaccination sites.

“You can try to reduce infections, or your focus is to reduce deaths,” said James Potter, executive vice president of the New Hampshire Medical Society. “Like the 1A phase that we’re going through right now, the focus was to reduce deaths.”

Phelan, though, is concerned about a provision that would allow providers to make exceptions for those who they believe are at “a significant risk for severe illness due to any multiple co-occurring co-morbidities.”

which could lead to a lot of primary care chaos.”

On a weekly call with medical providers Jan. 6, state epidemiologist Dr. Ben Chan said flexibility should be “the exception, not the rule.”

“This note is not meant to open the floodgates for providers to be signing off on any and all patients that you want to have vaccinated,” he said.

As of Jan 5, over 30,000 healthcare workers, first responders and long-term care facility residents and staff in New Hampshire had received a Covid-19 vaccine.