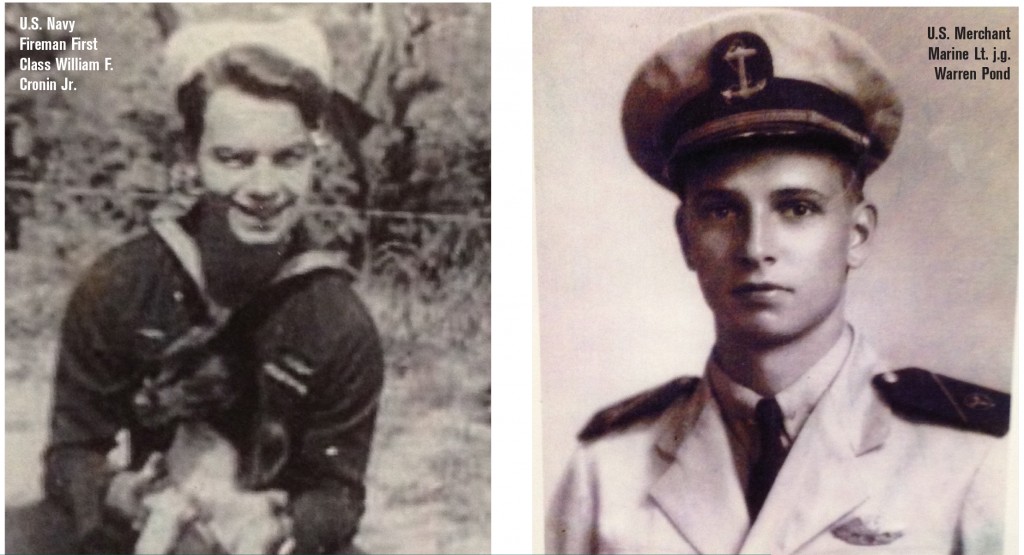 The 75th anniversary of VE Day, celebrating the Allies’ victory in Europe in 1945, is May 8. According to the U.S. Department of Veteran Affairs, fewer than 325,000 of the 16 million Americans who served in the Armed Forces during World War II are still alive. Their stories inevitably come around to duty and sacrifice in the field, across the oceans and on the home front. The values that united America and its allies then offer a lesson for today as our country faces its present medical and economic crises.

William F. Cronin Jr. and Warren Pond, two of those World War II vets, live in Wolfeboro and volunteer at the Wright Museum of World War II — a museum that Tripadvisor calls “a little gem.”

Q. What role do you have at the Wright Museum?

Cronin: I’m a greeter. There’s a lot of information with so many displays and artifacts. A lot of people just want to get pointed in the right direction.

Pond: I’m experienced in all kinds of maintenance. I’m a grunt.

Q. What was your training and military assignment?

Cronin: I pestered my parents after Pearl Harbor. I think they got tired of listening to me because they eventually signed the papers when I was 17. I liked to hunt. I was trained on an Oerlikon 20 mm anti-aircraft gun. It had three types of shells: armor-piercing, tracers and explosive. Eventually, I wound up working with Mark 14 boilers in the engine room.

Pond: I had always loved to sail. Merchant Marine Liberty ships were class C4 cargo ships. We transported food, fuel, troops, munitions, medical equipment and anything else that was needed. We couldn’t have won the war without Liberty ships. I worked in the engine room.

Q. What ship or ships did you serve aboard and where were you deployed?

Cronin: I served on the destroyer USS Cowie (DD-632). The ship was an escort in about 13 North Atlantic and Mediterranean convoys. I was transferred to the heavy cruiser USS Columbus (CA-74) in the fall of 1944.
We were on our way to Hawaii when a guy below yelled, “Ever heard of an atomic bomb?” I didn’t know it then, but I’m sure we would have left from Hawaii for the planned invasion of Japan.

Pond: I was aboard six different Liberty ships as well as other troop ships and freighters, and made 108 circuits of the English Channel between Southampton and Le Havre, France. We delivered troops and supplies and brought back soldiers who were going on leave. I also sailed in North Atlantic convoys.

Q. What actions did you participate in?

Cronin: Our destroyer squadron had three confirmed U-boat kills combined in the North Atlantic and the Mediterranean. I felt sorry for those guys. They didn’t have a chance in a submarine.

It wasn’t combat-related, but Salty Richardson, a shipmate, got a “Dear John” letter from his wife. He waded into the water and took his own life. That was tough.

We were also riding in a jeep in North Africa when we felt bullets whizzing by. I assume it was Arabs firing at us. Their guns looked like they had bamboo barrels but it didn’t slow the bullets down!

Pond: On April 20, 1944 — I remember the date because it was Hitler’s birthday — we got hit by a German aerial torpedo off the coast of Algeria and were ordered to abandon ship. When we could see that the ship wasn’t going to sink, we reboarded and saved the ship. Everyone made it. Another Liberty ship in the convoy took a direct hit and was just obliterated — a tremendous loss of life.

Q. Did your wartime experience prepare you for your career?

Cronin: I managed 650 workers at Heim Bearings in Fairfield, Conn., before leading Psycho-Cybernetics workshops. I worked hard in the
Navy and hard after that. I wanted
to retire at 50 and did!

Pond: After my discharge, I started out as a draftsman, became an engineer and eventually had my own company, Pond Technical Sales Inc., out of Hamden, Conn. We dealt with control valves, electronics, instrumentation and pneumatics. The turrets on a ship run on electronics. This was in the early days of mechanical electronics.

Q. Do you have any additional thoughts?

Cronin: My son Billy was with Delta Force and was part of Operation Eagle Claw in 1980. They tried to rescue the American hostages in Iran. Unfortunately, the mission failed, but I’m very proud of him.

Five or six years ago, I was a guest of the Honor Flight Network, an organization that brings World War II veterans to Washington, D.C., to see the new memorial. We had a police and motorcycle escort from Wolfeboro to the Massachusetts border, and then another escort to Logan. It was really something to see! I was deeply touched.