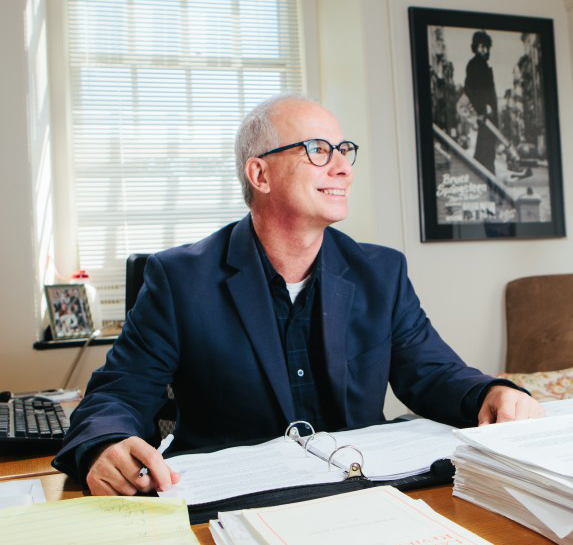 John Greabe, a professor of law at the University of New Hampshire Franklin Pierce School of Law, recently gave a presentation to lawyers on ‘The Coronavirus and the Constitution.’

John Greabe is a professor of law at the University of New Hampshire Franklin Pierce School of Law in Concord and director of its Warren B. Rudman Center for Justice, Leadership & Public Service. He has taught, among other subjects, constitutional law. Recently, following social distancing requirements, he gave an online Continuing Legal Education presentation to fellow lawyers on “The Coronavirus and the Constitution.” The following day he fielded the following questions from NH Business Review.

Q. At what points have coronavirus restrictions run afoul of the Constitution?

A. I guess I’ll give you a legal realist response. When courts start ruling that the shutdowns have gone too far and constitutional limits have been reached, it will only be when the political authorities continue the shutdown in the face of pressures to lift it. There aren’t a bunch of ontological lines out there. In the context of emergency orders, courts are very reluctant to second-guess political authorities in real time.

Q. In other words. they will second-guess after the fact?

A. Well, the most famous example of that is the Korematsu decision in World War II when Japanese-Americans were interred. The court upheld the constitutionality of that decision, with a powerful dissent by Justice Murphy.

Q. Andrew Napolitano has said the shutdown decisions are unconstitutional because they are essentially legislative decisions made by the executive branches, namely governors. Do you agree?

A. It’s different in every state. It’s always a question of how far the authorization extends. These governors are all acting pursuant to statutory authorization.

Q. Is there a parallel to the Civil War, when President Lincoln suspended habeas corpus and locked up editors and publishers?

A. Personally, I think that would be overstated. I take it many people are frustrated by orders that interfere with personal liberties. But in the Civil War, both North and South put people in jail for speech. The nation just didn’t have a clear and robust understanding of what the First Amendment means. There is an absolute right to protest, and measures taken to suppress speech based on content are presumptively unconstitutional. But restrictions based on time, place and manner of speech are permissible.

Q. Does this virus emergency trump freedom to gather and protest?

A. I don’t feel like I know enough or have enough information to say. We’re still learning about this virus.

Q. What about the closing of churches and the free exercise of religion?

A. There are really different ideas whether or not churches should receive special or different treatment. If a group becomes highly contagious, and you start from the premise that you need to limit person-to-person contact, the question becomes, should churches be exempted from rules which apply to everybody else? But the reality is the premise that the order is issued in good faith because the danger from such gatherings can have an exponential effect as people go out into the community and go home. Then there is the question of overload on our healthcare system. Governments are allowed to take that into account as well.

Q. If churches were to remain open and require the members to attend, could someone who contracts the virus in church sue the church?

A. You could sue, but I think you’d run into some immunity issues.

Q. What could end the shutdown and the protests?

A. New issues and controversies. If they develop a vaccine, for example, will we require everyone to take it?

Q. Do you fear that each time we surrender essential liberties it makes it easier to do so again and again?

A. The reality has been liberty, at least in some respects, was expanded during the 20th century from where it was before.

Eugene Debs was put in prison just for opposing World War I. There is sometimes an impression that there was a golden age of liberty when, in fact, we’ve had from the beginning things like the Alien and Sedition Acts. History is complicated. I’m not terribly concerned about a one-way ratcheting down of the Bill of Rights because I don’t think that’s accurate.