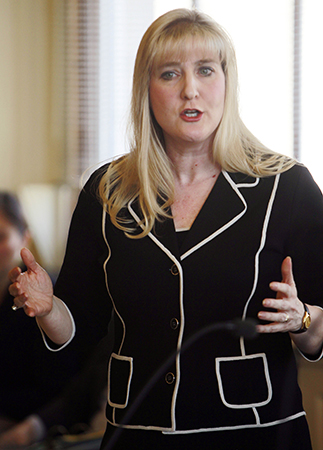 Manchester native Donna Soucy, a member of the NH Senate since 2012, became the chamber’s president in December, following an election that gave Democrats a 14-10 majority. Her State House career also includes a stint from 1992 to 1996 as a member of the NH House.

An attorney, Soucy has a long pedigree in New Hampshire politics. She is the daughter of the late C. Arthur Soucy, a longtime Democratic Party activist and civic leader who was a Manchester alderman and Hillsborough County commissioner, and her late mother Lillian, who served in the House in the late 1980s.

Q. Were you involved or interested in politics from the very get-go?

A. Because my parents were involved, I got to go to a lot of political functions. I remember when Jimmy Carter was elected president, my dad had gotten me a peanut necklace that I still have to this day, a little gold peanut. We would talk about politics and always watch the news at home. Sort of in my blood, so to speak.

Q. You worked for a while for the Bianco Law Firm in Concord and then moved on to the NH Banking Department. What were some of the things you worked on?

A. I was initially hired as a legal coordinator, so I worked on rules, consumer complaints, some of the transactions involved with the banks and credit unions. Then I moved up to legal counsel, so I would sometimes preside over hearings. While I was there, we rewrote the trust statutes to allow for trust companies to be sited here. Now the number of trust companies actually outnumber banks. It’s really an industry that’s taken off.

Q. You moved from there to become chief of staff of the NH Senate. What made you decide to run for the Senate?

A. In 2010, the Democratic majority in the Senate went from 14 to 5, so I was no longer employed by the legislators and just did some independent consulting work. In 2012, there was an opportunity to run. It was an open seat. The Republican, Tom DeBlois, who had occupied the seat decided to run in the primary for Executive Council. I decided to throw my hat in the ring. That was the (House Speaker Bill) O’Brien administration, and certainly dismantling of some really important pillars of state government funding for important things like Child Protective Services and mental health. I’ve always been an advocate for public safety and for victims’ rights.

Q. As a senator, every year you’ve introduced a bill to raise New Hampshire’s minimum wage, including this year.

This year it will be Senate Bill 10 because we’re going to start at $10 an hour. The increases to the wage will not be just a dollar amount but we’ll look at other factors, such as whether or not a business offers paid sick days. To the extent they offer those benefits, they would not need to increase their wage. It would be viewed as part of the wage package.

Q. When would it take effect?

Q. Now there are a lot a lot of businesses saying, “We pay a minimum wage anyhow so we don’t need to do this.” What’s your response?

A. New Hampshire has a long history of establishing what it considered a minimum wage. That goes back to the ’40s. Businesses probably are paying more than the minimum wage. The economy is driving them to pay more, but the fact of the matter is if somebody is working full time and making $7.25 an hour, they can’t afford to live in New Hampshire. They qualify for every form of benefit that we offer, so we’re essentially subsidizing companies that are employing people because the government is having to provide them with food stamps and other services, with free and reduced lunch for their children that we’re picking up anyway, and I don’t think there should be that type of a government subsidy.

A. What we mean in the Senate is to suspend the increases, freeze them in time, and stabilize them so that businesses who have enjoyed a tax cut to this point would continue to enjoy it, but going forward we won’t further reduce the business taxes. The legislation wouldn’t be retroactive. We want to provide some property tax relief, this is one way of doing it.

Q. That means the rate would remain at 7.9 percent and not be the 7.7 percent it’s scheduled to be for this tax year?

A. Currently, taxpayers are paying a BPT rate of 7.9 percent. The 7.7 percent reduction that has been referenced is for the next tax year, to be paid in 2020 for business activities of 2019, meaning that the taxpayer has not paid taxes at that rate. As such, should this become law, the taxpayer will not be paying more in taxes, they will be paying the same 7.9 percent. This would freeze the BPT at that rate and basically eliminate future reductions to it.

Q. Let me just ask you about prescription drugs.

A. One of the things we have to continue to do is increase transparency. It’s a very convoluted system and it’s very hard to trace the money throughout the system between the manufacturers, the pharmacy benefit managers (PBMs), the pharmacists themselves and the consumer.

I have introduced legislation to require the registration of pharmacy benefit managers at the Department of Insurance and to provide some disclosure of what they are actually offering in rebates.

Who actually yields the benefit of a rebate? Does it go down to the consumer or is it scooped up earlier in that chain between the manufacturer and different entities that deal with the drug?

The other thing is, we do not have a very robust consumer complaint process. If you ask the [Insurance] department about the number of consumer complaints about PBMs, they’ll tell you there aren’t very much. That’s because people don’t know that they can actually file a complaint. With PBMs, there has always been a hidden layer. You don’t realize there’s this entity between you and your insurance company that’s making decisions about which drugs are covered and what you’re ultimately going to pay.

Q. What are your other priorities?

A. As an individual senator in the past, I’ve advocated for victims’ rights and been a champion for women’s health and reproductive rights, ensuring that people with pre-existing conditions aren’t discriminated against.

Q. How about your style as compared to other Senate presidents.

A. I certainly have a great deal of respect for Senator Morse, my immediate predecessor, and consider Sen. Sylvia Larsen to be a mentor. We are a very small group of people, 24, and it’s important that each individual senator has an opportunity to have their voice heard, and to always be treated with dignity and respect.

Q. How about your relationship with the governor?

A. The relationship is formative. We’re getting to know each other. I haven’t had a lot of interaction with him personally before. This is a very unique situation. As a Republican governor with two Democratic chambers, he’s going to have to decide if he’s going to use his veto pen a lot. I’m hopeful that there are issues that we can find common ground on. We’ll hear his budget message on Feb. 14. I don’t want to end up with a situation like we have in Washington with the shutdown.

Q. What issues did you hear in his inaugural that you think are common ground?

A. Mental health and behavioral health are a priority for the governor. Closing the Secure Psychiatric Unit that I think we all support. On child protection, we probably might want to carry that a little farther in terms of working to reduce caseloads.