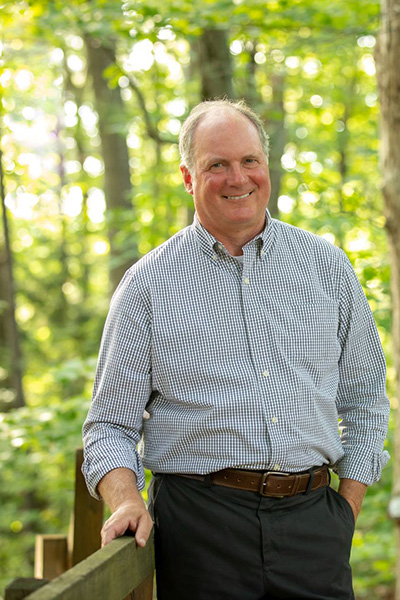 New Hampshire’s forests have ‘long-term benefits that play a large role in the economy,’ says Jack Savage, newly named president of the Society for the Protection of New Hampshire Forests. (Photo by Ryan Smith)

In October, Jack Savage of Middleton became the fifth president of the Society for the Protection of New Hampshire Forests, one of New England’s oldest and most influential conservation organizations.

A New Hampshire resident for 30 years, Savage joined the Forest Society staff in 2005 after working in newspapers, magazines and book publishing. He writes the “Forest Journal” column in the Union Leader newspaper, covering everything from game cameras to wild food-loving New Hampshire chefs.

I’m not a forester, but I am a certified tree farmer. I love the woods. When I was a kid, my family went to a hunting camp in West Virginia every year. After moving to New Hampshire, I joined the board of selectmen in my town. The Forest Society was working on a conservation project, and I became intrigued. I realized that the town needed to be more proactive in protecting land with long-term value for clean water and recreation.

What does the Forest Society do?

The Forest Society seeks to perpetuate the forests of New Hampshire through their wise use and their complete preservation in places of special scenic beauty. That’s been our mission since 1904, three years into our existence.

How do you do that?

We own and preserve forest lands, which we manage and steward. We work with landowners by acquiring conservation easements and facilitating the transfer of property with deed restrictions. We advocate for legislation and practices that encourage wise conservation of natural resources. Education also is a key component of our mission. We teach people about good land stewardship and the critical importance of forests to our lives and livelihood.

How much land does the Forest Society own?

Our forest reservations total almost 57,000 acres in 100 towns, making us the state’s third-largest private landowner. Our largest is 5,000 acres on Mount Monadnock, some of which is leased to the state for a park. Creek Farm in Portsmouth is small, but it has a huge impact: 35 acres that people enjoy right in the city. It’s an outdoor classroom for lots of people.

How are its lands used?

We’ve always thought of ourselves as a forestry organization. We grow trees, and we do it well. Timber harvesting is part of our multi-use approach to responsible land management. We do $300,000 in stumpage a year and pay timber tax, as do other forestland owners, when we harvest. It generates income, while helping us meet other goals, including creating wildlife habitat and protecting water resources for the future. We also embrace recreation: People hike, paddle, fish, hunt and enjoy other activities including, where appropriate, snowmobiling and mountain biking.

In what other ways does the Forest Society benefit New Hampshire’s economy?

Many people don’t recognize how important it is to perpetuate and care for forests. There are long-term benefits that play a large role in the economy, both by protecting critical resources and promoting recreation. There are residual economic benefits when you have 30,000 people hiking up Mount Monadnock every year. Mount Major in the Lakes Region also is an incredibly popular hike. We pay timber tax, as do other forestland owners, when we harvest.

The Forest Society worked to prevent the Northern Pass transmission line. What does this success mean to the organization?

I think the Northern Pass saga will be seen in the same light as our fight to save Franconia Notch, where we forged a compromise that created the Franconia Notch Parkway, the only two-lane stretch in the federal interstate system. In concert with the Appalachian Mountain Club, we were instrumental in conserving what is now Franconia Notch State Park and the Flume.

But what it means to our organization is far less important than what it means to the state as a whole. It was neither a good idea nor a well-thought-through proposal. It wasn’t about what was good for New Hampshire, it was about what was profitable for Hydro Quebec and Eversource. The state is far better off without it as it was proposed.

What would you like the Forest Society to accomplish?

To answer that, I need to have a really big crystal ball. Over the next few years, we’ll develop a strategic plan to take us deep into the 21st century. We’ll need to be nimble to respond to opportunities we don’t know about yet—while carving out enough space and time to think long-term.