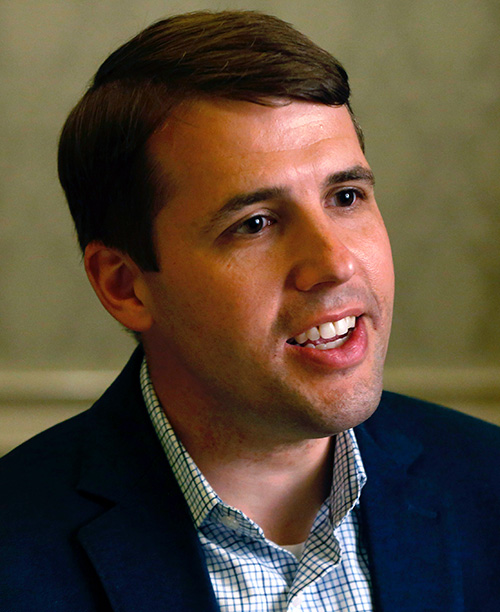 Manchester resident Chris Pappas, U.S. representative for New Hampshire’s 1st Congressional District, got his start in politics while still in high school, enlisting as a volunteer in the winning gubernatorial 1996 campaign of then-NH Sen. Jeanne Shaheen. He began running for office on his own upon graduation from Harvard University in 2002, and hasn’t stopped running since.

He has worked his way up the political ladder, winning two terms as a state representative, two as Hillsborough County treasurer and three terms as District 4 Executive Councilor. In January, Pappas, 38, joined the large class of freshmen congressmen.

With his father and a brother-in-law, he is co-owner of the century-old family enterprise, the popular Puritan Backroom restaurant.

Q. What’s it like to be a freshman congressman in the age of Trump?

A. It’s an incredible honor to be here representing the people of New Hampshire, but it’s also frustrating, because when I came here we were in the middle of the longest government shutdown in American history. I think the way we came out of that shutdown gives hope for our ability to get things done over the next couple of years.

Q. How can you be so optimistic, given the gridlock of a divided Congress and the increased polarization over the last couple of years?

A. I’m not trying to discount the polarization that exists. But I feel lucky to be serving on two committees where there is a big bipartisan consensus — Veterans Affairs and Transportation and Infrastructure. Those are both based on things where we have a great opportunity to move forward with legislation and develop a strategy that can gain bipartisan support. They may not be committees that are on television every night or covered by cable news, but I’m confident they’re going to have a lot to show for these two years.

Q. Before you were even sworn in, you signed on to something called the For the People Act, promoted as a reform bill that would “end the culture of corruption in Washington.” How would it do that?

A. The first priority of being in the majority is making sure we’re strengthening our democracy. The feedback I was getting from people when I was campaigning is that corporations and special interests are having an outsized influence in Washington and that has its impact on policy. The House supports campaign finance reform and limits on the influence of dark money in our elections.

Q. What about healthcare?

A. We’ve had a number of votes this session to go beyond the Affordable Care Act and to look for a sensible solution to make coverage work for individuals.

One of the areas we’re working on is lowering the cost of prescription drugs and ensuring that generic drugs can get to market more quickly. We’ve considered ways to shore up the ACA healthcare exchanges. So we look for bipartisan measures to curb the cost of healthcare in America. We want sensible action around the healthcare system, so everyone doesn’t go bankrupt when they get sick.

Q. What do you think Congress should do about the immigration crisis?

A. During the government shutdown, the House and Senate added infrastructure security at the southern border. We need to ensure there are adequate facilities and an adequate number of judges to hear the cases. It was only a few years ago that we saw immigration reform passing in the Senate, and I hope to see us achieving that kind of support again. It’s important for our American way of life to have a well-defined system for immigration.

Q. You’ve mentioned bipartisan consensus on the need for infrastructure improvements on roads, bridges, etc. Yet the national debt now exceeds $22 trillion and no one seems to be talking about fiscal responsibility.

A. As we look for ways to invest in our infrastructure and the economic future of this country, we can’t continue to put it on the national credit card.

We all understand we have to work to improve our nation’s infrastructure — roads, bridges, airports, protecting water systems, broadband. The question Republicans and Democrats are working through now is how we create stable funding for that. I think that’s going to be a part of moving forward at a very significant pace.

Q. It’s been widely reported that some of your colleagues in the House are eager to begin impeachment proceedings against President Trump, while Speaker Pelosi is trying to rein in that effort, at least for now. Where do you stand on impeachment?

A. We have to unpack the findings of the Mueller report. Many committees have to do that work. It’s critical that we hear from Mueller himself, as well as others to help us see the fuller picture. There appears to be a concerted effort by a partisan Justice Department to misrepresent Mueller’s findings, and so more work needs to be done to study and understand the work that he did over the past several months. Congress has a critical role to play in oversight.