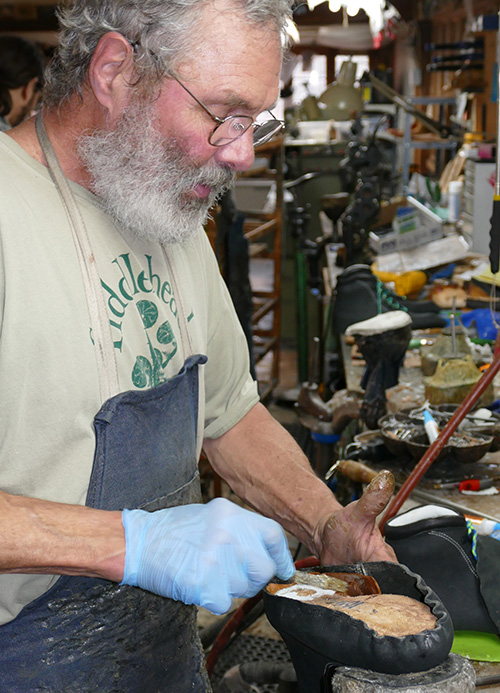 Peter Limmer, a fifth generation bootmaker in his family, is still making hiking boots by hand, one boot (or, one pair of boots) at a time, measuring, cutting, gluing and hammering away at his well-worn workbench at the Peter Limmer & Sons shop, off Route 16A in Intervale, just north of North Conway.

Limmer boots have traveled the world over, cradling the soles of famed and novice climbers alike. But they’re not just for the famous. Ordinary folks can claim their own if they have the patience and the cash.

Expect to wait 18 months or so for your custom pair — created to exacting specifications based on the size and shape of your foot. When it’s time to pick them up, prepare to part with about $800.

Veteran customers swear by the brand and will tell you the price is well within reason. Consider, for instance, the boot’s upper and midsole are all-leather construction, and the upper is made from one piece of cowhide, which reduces the need for numerous seams and provides fewer opportunities for water to seep in. Limmer also sells a stock, non-customized, but still handmade, boot at half that price, putting the cost in line with that of mainstream brands.

Peter Limmer & Sons is celebrating its 100th anniversary this year.

Q. So you’re the fifth generation of your family in the bootmaking business.

A. Third in the states, but my great-great grandfather was a bootmaker in Germany. My grandfather got his master’s papers in 1921, but the reason that we figure we’re on our 100th anniversary is because when you go from apprentice to journeyman, as a journeyman, you can start a business on your own, but it’s not until you’re a master that you can hang a shingle. My grandfather moved over here [from Germany] in the ’20s. They moved to Intervale in the 1950s from Jamaica Plain, Mass. My grandfather holds the patent for the first ski boot made in the United States. Bob Lange, supposedly, dipped a pair of my grandfather’s boots in polymer to make the first plastic-style ski boot.

Q. So was it because of the rise of the plastic boot that you stopped making ski boots?

Q. How long have you, personally, been doing this?

A. This is my 45th year. I basically got right out of high school — I graduated a year before my class — spent six months in Europe and came back here and dabbled in a little bit of different trade and stepped back in here in late ’73.

Q. Did you have it in mind that you would be doing this, or did you have an epiphany in Europe? How did that all come about?

A. It’s kind of hard to say. I don’t know how I wound up back here, but I’m glad I did, you know. I was never pushed into the business.

Q. What would you say is a reasonable lifespan for these boots?

A. I’d have to say that, on the repair rack, the average boot is 25 to 30 years old. But it depends on how you take care of them. You can buy the best car in the world, and not take care of it and it’s not going to last.

Q. How many times would you say a pair can be resoled?

A. We say that you can resole them, probably, three or four times with midsoles. If they come in early enough so that they don’t get into the midsole, we can replace just the outer soles. This one guy’s got five outer soles on his first midsole, so, if he’s prudent that way, he might have 20 sets of soles on his boots by the time they have to be retired.

Q. The one-piece construction — is that unique to Limmers?

A. Back in the day, I think it was probably the norm, but it’s a very expensive way to produce a boot. The bigger the pattern is for the upper, the more waste there is, because they don’t knit together quite as well. That’s why [large manufacturers] have gone to componentized. They’ll give a designer a two-foot-square piece of leather and see if they can make a boot out of it. You can do it, but you’re going to have pieces. My mom was the one that cut leather here, and she always said that that’s where the profit margin was. A lot of times, I’ll take a hide and I’ll weigh it in before I start cutting it, and I’ll weigh the waste out to see what my percent ratio is.

Q. Does leather have a grain the way wood does? The way granite does?

A. The way granite does more so than wood, I think. It’s really hard to read. You’re going to look at both sides of it because of the finish, the temper. Most of the best leather comes right off the backbone. And then the farther you get down, just like us, this gets a little softer. This is probably the best piece [pats his rump] but that’s where they put the biggest brand, too. If cowboys started wearing glasses, they’d be able to sell more leather, instead of being able to see their brand a half a mile away. Once leather is burned, it’s not a viable piece of leather anymore.

Q. You have two boys. Apparently, they don’t have any interest in taking on the business.

A. No. I never tried to push them into it, just like my dad never pushed me into this. We sent them to college and they went off and started their own business, and they’re very lucrative at this point. I’m proud of them. [Adam Lane-Olsen has been apprenticing with Limmer, working in the shop alongside him for more than three years. The plan is for Lane-Olsen to take over the business when Limmer, 63, eventually retires.]

Q: How long does it take to learn how to do this?

A. I’d have to say that I’m still learning. And I look forward to challenges. If I had a nickel for every time I’ve heard somebody say, ‘I’m going to have the weirdest feet you’ve ever seen,’ it’s like, ‘Bring it on.’

Q. The way the custom boot works — do you come in, have your foot traced, and you actually get the boot made to your specifications?

A. Yeah. That’s the only way that we offer a 100% satisfaction guarantee.

Q. What do you think it is that makes these boots so legendary?

A. I think it’s just that we’ve been around long enough. We’ve never changed anything, we’ve never tried to follow suit.

Q. Do you get people dropping in unannounced because they’re on a pilgrimage?

A. Yup, yup. I’ve had somebody come in, actually, for a final tracing from as far away as Tasmania, which is impressive. I mean, that humbles me, to have someone fly 30 hours to have a boot built. When we build a boot, we build it to within 2 millimeters of a person’s foot shape. That relates to almost a five-pound weight gain or loss in an 18-month period.

Q. How many pairs of boots do you figure you’ve put together in your lifetime?

A. I’d have to say that my average, when I was doing solo, was 200 pair a year. When I started in here, we had a six-person workforce in the family, so we cranked out a lot more boots. We were getting up to, maybe, 800 pair a year, and as everybody passed on and moved on, it got slower. I’m glad I grew up European. I’ve always lived inside my means. Slow and steady, that’s what it is. What’s different in my perception of being the owner of the business: I’ve always considered myself to be the curator. The business has always been my partner. You’re always putting stuff back into the business to try to keep it viable.

A. The heritage, for the most part, and with that, it’s the craft, too.