There are three ways to invest in precious metals, and Lavoie, a member of the American Numismatic Association (ANA), has had his hand in all three: acquiring physical gold and silver, speculating in the futures markets and investing in mining stocks.

Bob’s Coins was founded in 1973, a year beginning with the death in a plane crash of baseball All-Star and humanitarian Roberto Clemente, followed by America’s descent into Watergate and the OPEC oil embargo, and Secretariat winning horse racing’s Triple Crown. Gold was up 66%, to $106.48, per ounce in that unsettling year. 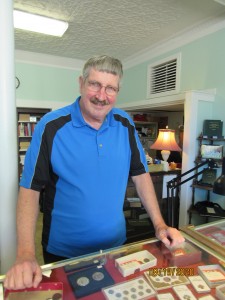 Bob Lavoie, owner of Bob’s Coins in Manchester, says he sees the price of gold rising to $6,000 an ounce ‘within five years.’ (Photo by John Angelo)

If 2020 feels like “déjà vu all over again” in the words of the late Yogi Berra, it’s because uncertainty has reigned. NBA icon Kobe Bryant and his young daughter have been killed in a helicopter crash, Covid-19 has struck with impunity, affecting the livelihoods of millions and forcing record deficit spending, while wildfires have raged in California and Australia. A Secretariat-like bright spot? Air pollution has lessened.

Always animated, Lavoie is a believer in due diligence. “I see gold going to $6,000 an ounce within five years,” he says. “And I’ll tell you why.”

You’re a big history buff. Do you have a favorite period?

The 19th century has always fascinated me, and within that, military strategy. In Europe you had Napoleon, and here, of course, the Civil War. I majored in history at St. Anselm College.

What are the pros and cons of investing in different forms of precious metals?

There is a shortage of physical gold and silver right now as investor demand has increased. There is always industrial demand too. My cost is above the daily spot price, so buyers are paying a premium wherever they buy. While weights are now standard for replica coins, such as the Walking Liberty half dollar, the older coins are 90% precious metal with many different weights. Uniformity makes it much easier for everyone.

What’s the best way to invest then?

I think the best choice for investing is junior mining stocks. A mine is labeled “proven” or “unproven,” depending on whether the mine has actual reserves. A typical 20-hole campaign means taking core samples 100 feet down and within a 50-foot radius. Chesapeake Gold in central Mexico has a proven 18 million ounces of gold with the stock trading at $4.46 today. Keep in mind that the cost of extraction is $800 per ounce.

I’ve spoken with CEO P. Randy Reifel twice a week going back to the 1980s, and the key to a junior mining company is trust in the people at the top. One of the major players, like Newmont Mining, is going to buy Chesapeake. Reifel has hit it big before.

What is driving the price of gold up?

“Inflate or die” is a saying about the money supply, and we are seeing huge deficit spending that our grandchildren will have to pay for. Covid-19 has investors paying attention, and investor perception is always key. Toss in the instability of the U.S.-China trade war. These are very difficult times.

What do you recommend in investment-grade coins?

People in the U.S. are big collectors. Pre-1933 gold coins have both collector and precious metal value. Make sure what you purchase is certified, otherwise you’ll get five different opinions from five ANA dealers. The price difference between an uncirculated coin graded MS-60 and one graded MS-65 is considerable.

What do you enjoy collecting?

Civil War tokens are still affordable at about $40 each. There was a penny shortage during the war, as copper and nickel were needed for the effort. Almost all of the tokens were made in the North and were of different metals. The two varieties were Store Cards and Patriotic.

Store Cards could be used with merchants. There are several thousand varieties, but I’ve only found one that was New Hampshire-based — an A.W. Gale token, which I assume was a dry goods store in Concord. Patriotic tokens might have lettering like “Union For Ever,” with an eagle or other symbol as well.

Is there anything you wish you’d invested in in 1973?

I had a lot of on-the-job training and you have to be a fast learner in this business. In hindsight, I wish I’d worked for another dealer for a year or two.