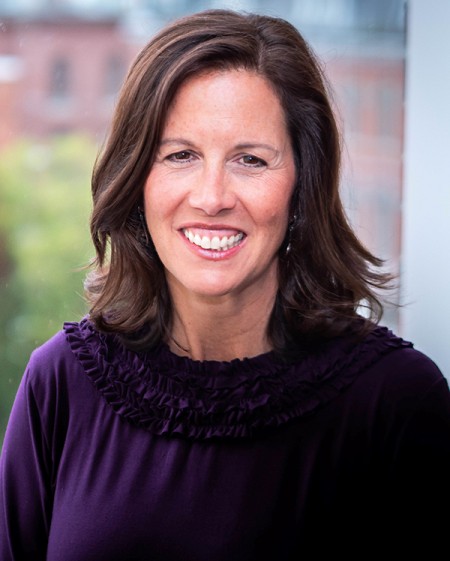 In April 2019, Joan Fortin became CEO of the law firm Bernstein Shur, which has offices in Portland and Augusta, Maine, and in the Manchester Millyard. She is the first woman to run the 105-year-old firm. Before becoming CEO, she focused her practice on land use, municipal law, tax increment financing and wind energy development projects.

Q. How long have you been at Bernstein Shur?

A. A little over 20 years. I’ll tell you why I chuckle when people ask me that question. I came as a student, a law student, went back to law school, graduated, clerked, went to the firm. Then, within a year, quit and moved to Alaska, and worked there for a year, and then came back. I’ve been back since ‘99.

Q. What did you do in Alaska?

A. I worked in a small litigation firm called Ashburn & Mason. My husband and I both went to Northeastern University School of Law, and they have a co-op program. A lot of Northeastern students end up in Alaska, because they’ll go to do a co-op there and they’ll stay, which is what my husband did. He was there, I was in Maine, we were dating, and we decided someone needed to move.

Q. You drew the short straw?

A. I was excited to. I had done a co-op in Alaska too. I loved it. But my Maine roots are pretty deep, and before the year was out I said, “I got to go back.”

Q. Is he still in Alaska?

A. We both came back to Maine and got married. Today he’s the deputy director of Pine Tree Legal Assistance. He grew up in Deerfield, NH, and went to high school in Manchester.

Q. The reason for that falloff?

A. That is the million-dollar question, and people disagree. Some would say, “Well, women have children, and then they don’t want to work anymore.” I don’t think that’s exactly what it is. I just think there’s a whole variety of things that come into play that make it hard for women to stay.

Q. What are you doing about that?

A. Part of it is just cultural. We’re trying to make sure that we have an environment where people feel safe and respected, like most employers today. Family-friendly policies are really important to me, and it’s important that it’s for men and women. Because we normalize professionals having children as something that men engage in and women engage in, it’ll decrease the stigma of women who need to leave early and take care of their child.

Some of the stuff we’ve done the last couple years. We have a very progressive parental leave policy. Just broadly, we have a policy that provides 16 weeks of paid leave for all new parents: male, female, same-sex couples, birth, adoption, foster care. We also took away a couple of barriers. One is you used to have to work at the firm a year before it applied, and that’s gone.

A. We’re just trying to make it easier for people to be all in with the firm in a way that works for them. Parental leave, flexible work. The other big policy change in the last year was we used to have a sexual harassment policy, and now it is anti-discrimination, harassment and bullying. And for lawyers to have a bullying policy, that’s pretty good.

The way I look at it is we hire really good people, and then we do everything we can to support them, so that they can thrive in their careers and not feel like they have to choose between having a child and having a career.

Q. You focused your practice on tax increment financing districts, or TIFs. Could you explain what they are best used for?

A. I represented both municipalities and private developers for many years on TIFs, and I always tell them the same thing. The TIF statute is best used to help municipalities foster economic development. You can do that in a city, and you can do it in a little teeny town.

In Maine, they’re used in different ways. For example, in Portland, it was used to develop Thompson’s Point. It was a blighted site that no one was developing for a long, long time, because it just needed too much. I worked with a private client to get a TIF district set up. The whole peninsula is a TIF district now and there are restaurants, theaters, museums and major events there. That’s economic development that benefits the city that would’ve never happened, but the TIF was able to provide an economic incentive for someone to take that on.

Another example is if a municipality wants to attract development. For example, if a town wants to create a business park. One of the things they’ll do is put a TIF district on it, and then use the new value to pay for laying power, water and sewer, all the infrastructure needed, so
that you’ve got pad level sites. It’s a lot more attractive to a new company if all they need to do is build from the ground up.

Q. What do you think the economic climate is going forward for the legal industry, especially considering the coronavirus?

A. Well, I have been feeling very bullish about it, and I’m very excited about the next couple years. Our lawyers have been very, very busy, and there are a lot of deals in the pipeline. But you asked the question that is now going to start keeping me up at night: What is the coronavirus going to do to legal demand? I think what we’re learning right now is everyone’s trying to figure out how to do as much work as you can remotely. People who have a business are not going to stop, people who are trying to build a business are not going to stop, and so it might be hardest for the people who have practices that involve smaller walk-in clients, people that need to come and meet face-to-face with their lawyer — that might be harder, depending on what happens with the social distancing.

A lot of our clients are larger clients, and they’re still going to continue to operate. They’re right now going to have probably more legal needs than fewer.