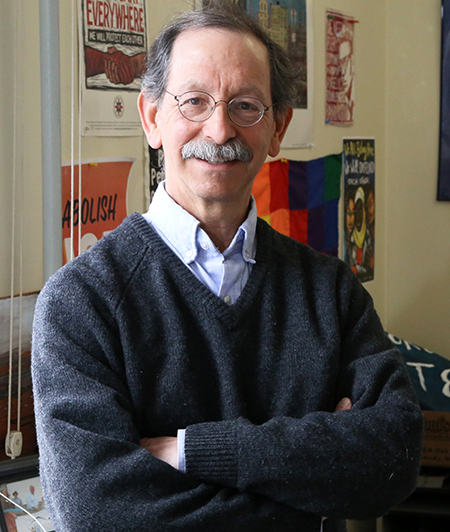 For nearly four decades, Arnie Alpert has been at center of New Hampshire’s social justice and peace movement as co-director of the American Friends Service Committee’s New Hampshire program. (Photo by Allegra Boverman)

Over the past 39 years, Arnie Alpert, co-director of the American Friend Services Committee’s New Hampshire program, has been at the center of the movement for social justice, peace and nonviolent action for change.

He played a key role in the campaign for a state holiday honoring Dr. Martin Luther King Jr. — an effort that culminated in legislation establishing the holiday in 1999. He also was one of the founders of the New Hampshire Coalition to Abolish the Death Penalty in 1997, which succeeded in repealing the state’s law in 2019.

Earlier this year, he announced his plans to retire in June.

Q. What got you into all this?

A. I don’t come from an activist family. I think we all assumed that I would follow my father’s footsteps and go to law school. He was a commercial lawyer in a small practice in Springfield, Mass. I finished high school in 1973 and went off to college. The times being what they were, I took a class my freshman year of college on the moral basis of politics, which included some readings about Gandhi.

I was interested in science. Wesleyan University had just developed a major that was called environmental science. That was a big magnet for me. I ended up with an interdisciplinary major. I had to look at the relationship between the different scientific fields as it related to issues that are affecting the environment. This was also the time of the Arab oil embargo, or what we call at the time an energy crisis.

A. Nuclear power was being promoted as an alternative to oil. I started learning about nuclear power. With my exposure to Gandhi, Cesar Chavez and Martin Luther King, when I then heard about this movement that was developing to try to stop the construction of a nuclear power plant in New Hampshire through the use of mass civil disobedience and nonviolent direct action, I thought, “I’m going to check that out.”

Q. That’s when you joined the Clamshell Alliance.

A. I drove up to Hampton Beach State Park on Oct. 23, 1976. There was a rally and alternative energy fair there and plans for an occupation the following spring were announced. After a month or two, I remember seeing some of the people who had gone to this rally, saying, “Hey, this demonstration in Seabrook is coming up, maybe we should do something about that.” The reaction was like, “What do you mean ‘we?’ ”

In other words, if something was going to happen, I could step up and make it happen. I contacted the Clamshell Alliance in Portsmouth, and they told me I needed to organize a non-violence training session. I booked a room, and there were so many people that we had to do role-plays out on the football field.

Q. Nuclear energy is again seen as an alternative to oil.

A. The meltdown of financial support for nuclear power is what killed the industry or sent it into a coma in the 1980s, following the Three Mile Island meltdown. Imagine you’re an investor and you’re thinking it might cost you $2 to $6 billion to construct a nuclear power plant, which in the course of a few seconds can turn into a heap of radioactive rubble.

We still ought to be concerned about the ability to divert nuclear power and misapplied nuclear technology to make weapons.

Q. You’ve been very involved in the immigration issues as well.

A. Around 2004, we started working with immigrant workers at a meatpacking plant in Manchester called Jac-Pac, and working conditions there were terrible. The workers all got fired, due to immigration status. A little while later Tyson bought the factory and then shut it down.

That required a different type of mobilizing. A group of xenophobic legislators started introducing anti-immigrant legislation at the State House. We started organizing an informal group we called the Immigrant Rights Task Force.

Q. Talk a little bit about other workers’ struggles.

A. We’ve been involved in economic justice in New Hampshire, in particular on the right to unionize, opposing right-to-work — we call it right to work for less — but also efforts to raise the minimum wage. We’ve also played a major role in efforts promoting affordable housing.

We were using the leverage that’s available through the Community Reinvestment Act to encourage, convince or pressure New Hampshire banks to make financial services more broadly available to low-income communities.

Q. Would you consider yourself anti-business?

A. The AFSC is not anti-business. We are also attentive to structural issues. The U.S. Supreme Court has decreed that corporations are people. They use the money that they make to invest in candidates and hire lobbyists. At the same time, we’ve been able to make common cause with major employer organizations like the Business and Industry Association, which understands why the lack of affordable housing in this state is a hindrance to business opportunities.