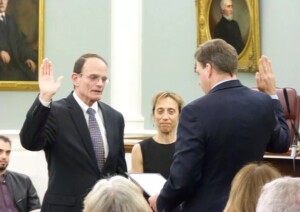 When he reached age 70, NH Supreme Court Justice Bob Lynn was forced to hang up his judicial robe. Now serving in the State House as a representative from Windham, Lynn is seeking to raise the mandatory cap for other judges who reach septuagenarian status.

Under a proposed constitutional amendment sponsored by Lynn, a Republican, the mandatory retirement age for all state judges would be raised to 75.

“We are losing a lot of really good people who wouldn’t retire at 70, but had no choice under the current constitution,” said Lynn.

A slate of NH Supreme Court justices have been forced to retire in recent years, and all have spoken publicly about their frustration with the constitutional amendment from 1792 that created the age cap. Along with Lynn, Justices Carol Ann Conboy and former Chief Linda Dalianis also left the bench as their 70th birthdays approached. Current Justice Gary Hicks is 69 years old.

Similar efforts to raise the mandatory age have failed in Concord in recent years. Lynn said opponents have argued that an age cap injects new blood into the judicial branch, along with new ideas. He countered that experience on the bench is a crucial asset for any judge.

Lynn said that as lifespans have lengthened over the past two centuries, there’s no reason not to extend the length of service a judge can have. He noted that a sizable proportion of the Legislature, which doesn’t face an age cap, are older residents.

“There are a lot of legislators who, like myself, are over 70, and yet I think are perfectly capable, and they’re doing a good job,” said Lynn. He noted that he opposes removing an age limit entirely, a system currently in place for federal judges.

This year’s attempt to raise the age is co-sponsored by Sen. Donna Soucy, a Democrat. To become law, it would require a supermajority of support in the legislature, as well as two-thirds majority in a public referendum.